He calls it “food for the people,” but Chef Kyle Gignac is doing a lot more than simply providing fine dining dishes for accessible prices since he started at La Piola Restaurant just a few months ago. He has created a European-style neighbourhood hub that offers an authentic and locally sourced menu within a friendly and homey environment. “I truly believe Victoria doesn’t need more fine dining” Gignac says about his decision to maintain La Piola’s casual vibe, “and I decided to [leave] out the tablecloths, the excessive servers, the $400 bottles of wine, and pass along those saving to the guests, with quality food at a reasonable cost.”

Chef Gignac runs La Piola with his wife Zoe, who came on board first, just over a year ago. Zoe encouraged her husband, at the time working at Cowichan Bay’s Terrain Kitchen, to join for support and partnership, as well as for his outstanding culinary talent and vision. Though the restaurant itself has been around for 10 years, Chef Gignac and his wife have worked tirelessly to make this space their own, offering their personal touch, flavour and background. 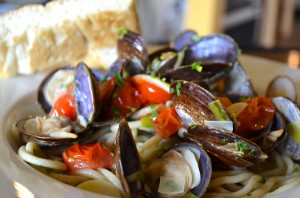 Chef Gignac notes that for him, “the easiest way to write a menu is to come up with flavour combinations that you, yourself love. By being truly proud of each dish, it helps sell it to the customer.” A background in European fine dining is the source of Gignac’s inspiration, and he believes that Italian cuisine is the true root of our current culinary system and standards. He mentored under Italian chef Richard Negro at Juniper Kitchen and Wine Bar in Ottawa, and was able to see firsthand the essentials of including local, seasonal and fresh ingredients – a crucial part of La Piola’s menu. Summertime arugula and Portobello mushrooms from nearby farms decorate some of their pizzas, while their “Spaghetti Clams” incorporate Denman Island savoury clams, locally grown leeks, cherry tomatoes from Sun Wing Greenhouse, house-made spaghetti, and Focaccia bread from the neighbouring Italian Bakery.

Chef Gignac’s culinary journey has taken him all over Canada, where he worked in mammoth kitchens at The Hotel Château Laurier in Quebec City and The 360 Restaurant in the CN Tower in Toronto. However, Gignac is starting to feel at home in Victoria, cooking alongside his wife in what he mentions is “basically a two person operation”, which feels as though you are dining in a small family-run café on a hidden street in Italy. Gignac believes that the transparency of the open kitchen concept and the fact that customers speak directly to the chef and owner, assure them of the quality they’re about to experience – a quality that’s all about food and not about what he feels can often be “pretentious add-ons.”

The looming summer months bring excitement to Chef Gignac and his wife as they will open up La Piola’s terrace, and incorporate summer bounty into the ever-changing feature menu. “Our goal at La Piola is to let the food speak for itself. We want to give the same quality of food people might expect from a fine dining establishment, but bypass the pretention attached to that culture. In fact we want to make delicious food as accessible as possible. Whether they experience it here or somewhere else, the more people who appreciate good food the better for my business.” Chef Gignac refers to this concept as “democratic dining” and concludes by saying this is what has worked for numerous neighbourhood restaurants in Europe for so many years, and what he hopes he can bring to this small, yet amazingly foodie-friendly Canadian town.

July|August issue on the stands. Read ...
Read More
One of the newest kids in the Okanagan Winery schoolyard has done ample homework in preparation for opening. Site, team, equipment, facilities, ...
Read More