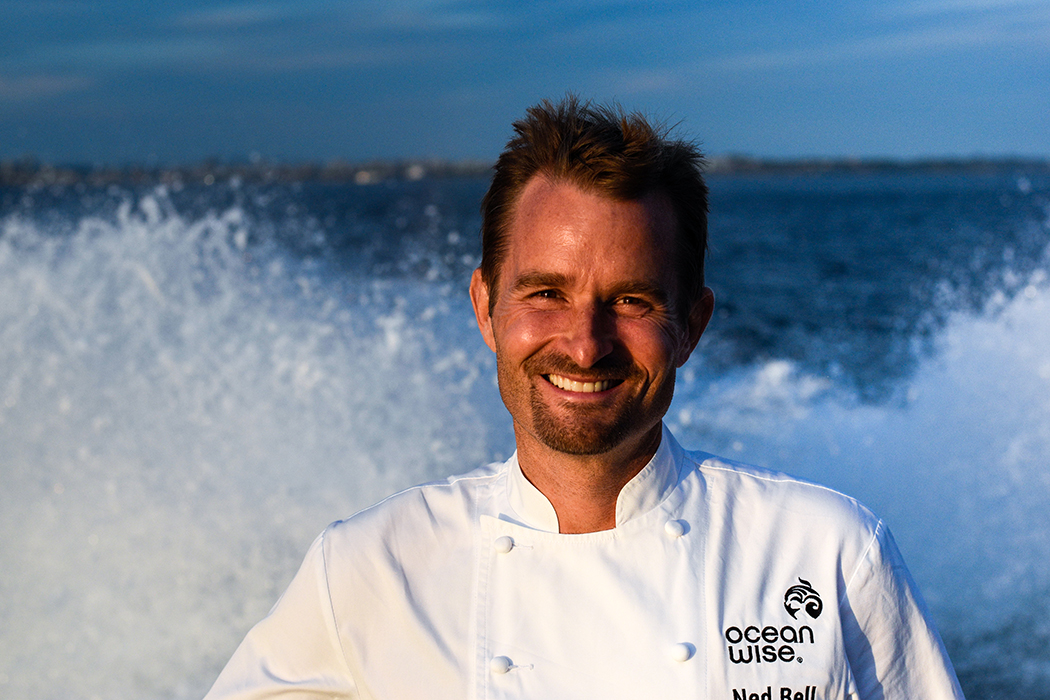 On August 20, 2019, Ocean Wise and Eagle Wing Whale and Wildlife Watching Tours teamed up to present the first in a series of speaker events in support of Ocean Wise’s Marine Mammal Research Program. Ocean Wise Executive Chef, Ned Bell, worked with Truffles Catering to present a menu appropriate to the night’s theme.

Bell led a conversation on the state of sustainable seafood, our local southern resident killer whale population, and how we can affect positive change in our oceans with our daily food choices. Sarah Patton, research biologist and coordinator of the Vancouver Island Cetacean Research Initiative, also talked on efforts being made towards marine mammal conservation.

The event was held aboard Eagle Wing’s catamaran, and the evening was planned to take place floating around Victoria’s inner harbour. Taking advantage of the calm waters and warm night air, the Eagle Wing team instead took participates to see Race Rocks Lighthouse before starting the conversation.

“Tonight with Eagle Wing, we’re really here to talk about marine mammal rescue, which is a part of the Ocean Wise organization,” said Bell. “We’re a collection of people doing incredible things, so this is just a fundraiser for us to continue to do that stuff.”

The dishes were inspired partly by Bell’s cookbook — Lure, which celebrates 40 species of seafood from California to Alaska — and partly by Truffles’ catering team. “It’s a true collaboration,” says Bell. “I wanted to make sure we let Truffles shine while having a couple of tastes of my signature dishes.”

In addition to wine and beer pairings, participants were offered small tastes of a variety of dishes including wild albacore tuna tataki with sesame, radish and lemon; wild pacific halibut with summer peas and lemon emulsion; grilled Humboldt squid with sofrito and pickled romaine; Dungeness crab salad with avocado and mango; and miso sablefish with green tea broth and pickled shitake mushroom. 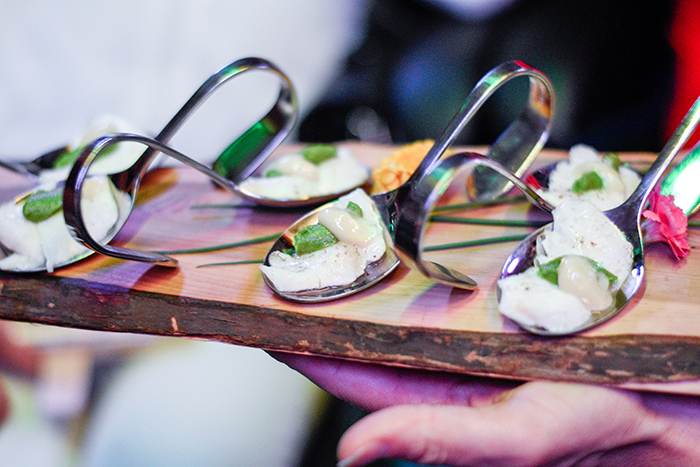 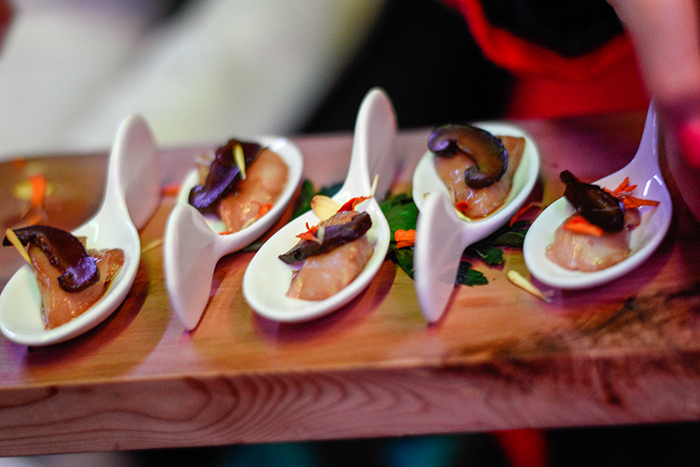 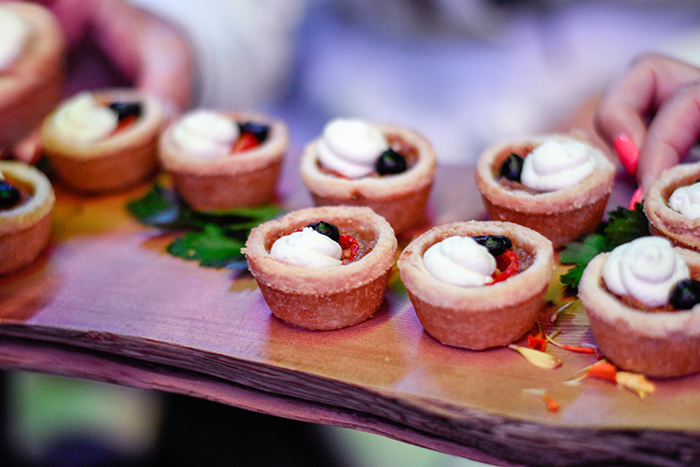 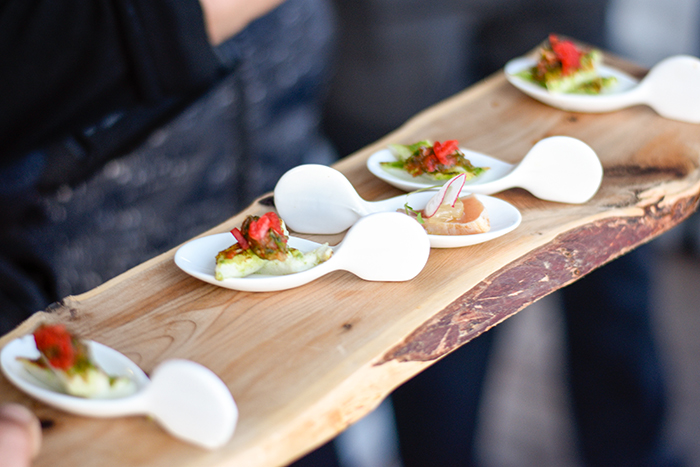 “The thing I always tell people is that we need to be cautious consumers,” says Bell. “I don’t want to simplify it too much, but at the end of the day I want people to eat more fish, but I need them to know where it comes from.” Bell emphasized the many challenges in sustainable consuming —the fact that 80 percent of the seafood we consume in North America is imported, and 80 percent of the seafood we harvest in Canada is exported. “We’re sending it elsewhere because other people are willing to value it more than we are.”

Including some general tips on how the average consumer can be aware of these issues, Bell suggests that one simple change buyers can make is to ensure that the species of seafood they buy is Ocean Wise certified. While this may mean avoiding certain varieties of fish and seafood, Bell challenges the public to his 52 and 12 challenge: he dares the average consumer to eat sustainable seafood once a week for the next year while trying something from the ocean each month that they haven’t tried before. While this may seem like a daunting challenge, he points to the more than 10,000 edible plants in the ocean or species of fish that are less common or less publicly desirable.

“I have a hard time with the word bycatch,” he says, referring to the common case when less desirable species are caught unintentionally and often wasted. “To me, anything you bring on the boat is valuable. We as consumers need to value that fish that might not be pristine halibut or pristine wild salmon. It might be a species that you’re not used to eating or a species that will have more flavour but will challenge you to enjoy it. I think it’s our responsibility to try new things.”

Bell and the team at Ocean Wise hope to make the event an annual or biannual happening to continue to support and grow the vital work they do.

Bell and the team at Ocean Wise hope to make the event an annual or biannual happening to continue to support and grow the vital work they do.

September 2, 2021 — Victoria, BC…Staff, volunteers and board members from Victoria’s Belfry Theatre have raided some of the best local ...
Read More
Staff, volunteers and board members from Victoria’s Belfry Theatre have been raiding some of Victoria’s best wine cellars to find rare and ...
Read More
It was an unforgettable afternoon. Mary Ploegsma served us David’s Tea’s vanilla chai with sweet local strawberries and chocolate biscuits. The ...
Read More
July 12th marked the evening of Power To Be’s very first Nature Gala (formerly known as Power to Golf) – a fundraising event full of wonderful ...
Read More
Stillmeadow Farm Presentation to Tom Henry from ICC and Slow Food Vancouver Island Present in photo from left to right: Steve Walker-Duncan – ...
Read More
January can be tough around these parts. In fact, it has come to be so globally known as such, that the third Monday of each January has ...
Read More

Superflux Cabana has opened upstairs at 804 Broughton St (the former location of The Livet). Featuring lots of Superflux beer and a menu that ...
Read More
January|February issue is on the stands! Pick up a copy, or read the digital version. Read ...
Read More
As the world shifts and changes below our feet right now, EAT thought it might be a good time to check in with our family of contributors, ...
Read More