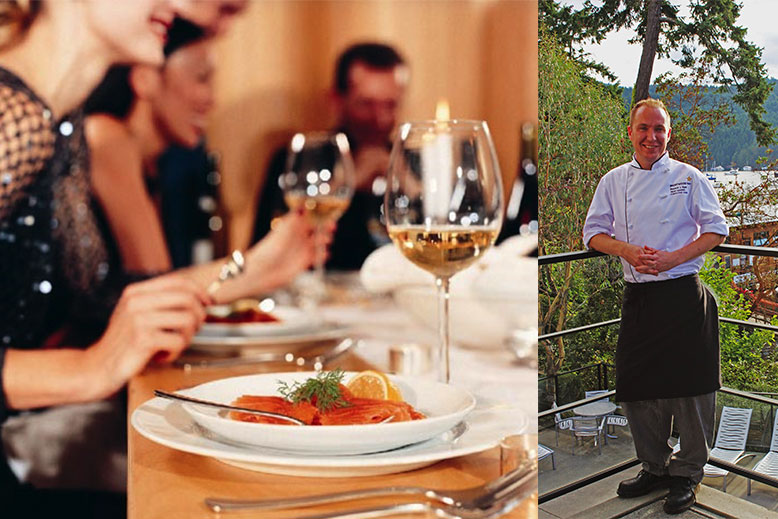 Don’t all good stories start like this?  It was a dark and stormy night in late October when I had the pleasure of attending Chef Sean Norris’s Cellar Paired Dinner at the Brentwood Bay Resort in the village of Brentwood Bay.

Chef Sean Norris put together a menu of incredible and delicious combinations and Sharon McLean paired the menu to an assortment of vintage wines. Sharon is delightful.  She gave us the history of the wines, talked about the pairings, all in a light and bantering way.  Chef Norris was born in the Kawarthas and has lived and worked in Toronto.  This is the second time he’s teamed up with the resort’s general manager, Natasha Richardson.

First up was the Averill Creek Charm de L’ile, which provided sparkle to the Kusshi Oyster starter. Light and airy, it’s close to a Prosecco—dry, not green, but with its own distinct, lovely taste—and it popped out the flavours in the oysters.  The dish was layered with flavours and they all were discernable, with the horseradish gelee being a big hit with all. 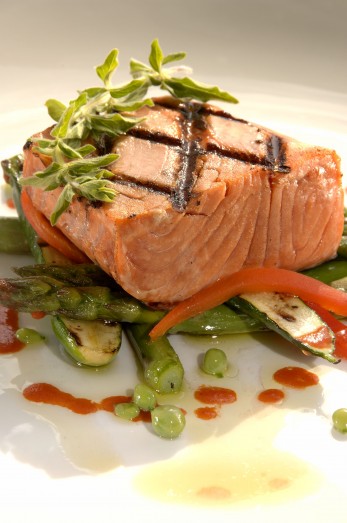 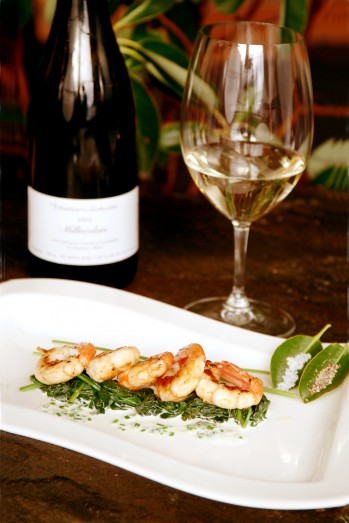 Next on the menu was Albacore Tuna served with sweet & sour apricots, nori-apple salad, mustard oil, and soy paired with Hans Lang Hatternheimber Hassel Riesling Auslese, 1976—sherry coloured and sweet, almost thick, in essence.  It’s an old vineyard and the grapes are a first growth, which makes it perfect for aging. It brought out the best in the dish, complementing the mustard oil and tuna beautifully.

As the waiters poured a Heitz Cellars Martha’s Vineyard Cabernet Sauvignon, 1966, the Vancouver Island Octopus with pork belly, tomato syrup, charred onion, fennel, and chilies was served. I’m not a big fan of octopus but this dish won me over.  This wine can stand on its own; it was a beautiful wine accompanying a stellar dish. Everyone at the table kept some to try with the Cowichan Lamb coming up later on the menu.

Following this seafood course came a Duck Breast with pickled plum (Chef, I need the recipe!), Swiss chard, and hazelnut paired with Chiroubles 2010 Henry Fessy.  There went my resolve to drink only a little. The duck breast was divine; the pairing even better.

A light intermezzo of cucumber-mint sorbet gave the table a chance to reflect on what we had been served so far. Conversation and discussion was the order of the night.

The entrée was the Cowichan Lamb with kabacha squash, Brussel sprouts, sun chokes, and shimji mushrooms paired with Plaisir de Merle Merlot, 2003, Paarl, S.A.  (these grapes came over with the Huguenots in 1693).  Another inspired pairing, the guests became rather giddy with the wine, the lamb, and the remains of the Heitz.  I savoured every drop and mouthful.

Dessert consisted of a pear with ginger, honey, and crème fraiche  served with Chateau-Guiraud Sauternes 1 er Cru, 2001. The ginger was a lovely foil to the sweetness of the honey, and brought out the honeyed notes in the dessert and Sauternes.   A perfect final pairing; a perfect end to a perfect night.

There are also Chef Dinners on February 19 (Cask Dinner), March 26 and April 23.