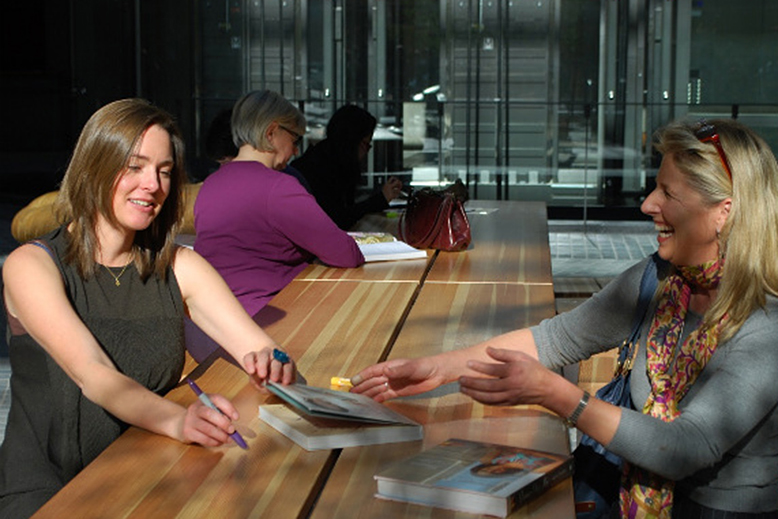 First off, a disclaimer: I don’t have cable tv. My exposure to the Food Network is limited to a few episodes I’ve caught on Air Canada flights, usually viewed without any sound, because inevitably one of my children has lost their earphones and I have to part with mine.  So I did not know what to expect when I first opened up my review copy of Laura Calder‘s new cookbook, Dinner Chez Moi: The Fine Art of Feeding Friends. At first glance, I was pleasantly reminded of one of my favourite cookbooks – Nigella Lawson’s How to Eat. That early impression came from purely aesthetic elements – a similar use of font and layout, but I soon observed more similarities – the witty preamble to the recipes, the friendly, chatty tone which makes you feel as though you are sitting on a stool across a counter as the author prepares a meal for you to share. Both food writers are skilled in the art of gentle nudging – “look”, they seem to tell us, “I’ve done this and so can you.” I think one of the reasons for this shared ability is that both Laura Calder and Nigella Lawson are writers first, cooks second. Both refer to themselves as home cooks, openly pilfering recipes from their friends and family’s collections, graciously crediting their sources when necessary. 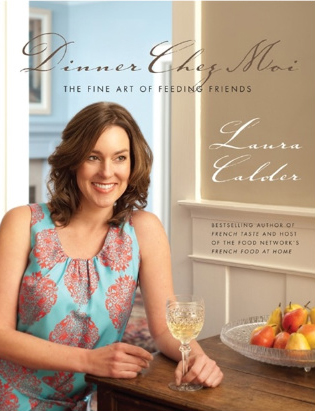 At her recent cooking demonstration and book signing at Cook Culture, Laura Calder explained how this new book is a bit of a departure for her, with more British and international flavours than her previous cookbooks, which focused on French cuisine. The inspiration behind this volume was to address the fear people have around dinner parties. The author described it as an eclectic book of menus…”with recipes like the Christmas Cherry Pound Cake thrown in randomly”. Arriving in Toronto after a decade in France, Calder was dismayed to find that dinner parties were few and far between, and, as new neighbours warned her, often catered.  A chance encounter at a Vancouver dinner party with a Welsh expat now living in Bamfield led her to a new group of friends – her ‘pub group’, and a renewed appreciation for breaking bread with others. Dinner Chez Moi is dedicated to John Evans, (the Bamfield Welshman, as I now think of him), and his culinary influence echoes throughout the book, from his Minty Potatoes (p. 85) to his Million Dollar Fish Pie (p.334-35).

Following a lovely presentation at Cook Culture, with delightful tastes of her Carrot Soup with Coriander (p. 4), the exquisite Chard and Eggplant Torte (p. 32-33) and Glazed Lemon Loaf (p. 35), Laura Calder kindly took the time to sit down with EAT and discuss French Food, cooking trends, and her rural spirit.

EAT: What led you to career in food?

Laura Calder: I think the interest in France and French… language is one of my passions too, and I think I always wanted to write about food. I never wanted to be a chef. I don’t consider myself a cook by profession, I consider myself a writer and a presenter first. Cooking is what I’m interested in, but that’s just what I use to talk about other things, really.

EAT: What first drew you to French cuisine?

L.C.: I like things that are familiar to me – things that are familiar, but things  where I have a strong starting point. French cooking has ingredients that I know – apples, potatoes, parsley, carrots, cabbage, meat – regular meat. It’s not like if you go into exotic Asian cuisine – I didn’t grow up eating those flavours, it’s not that I don’t find it interesting but I wanted to do things in my world, I wanted to be a good homecook where I was, so I wasn’t interested in exotic things. France just gives you such a good grounding, the technique and the basis of it means you can use it in other cuisines too, so France is my number 1, but I like European cuisines generally.

EAT: What was your first French food experience?

L.C.: It was in Quebec actually – I worked as an au pair in Quebec when I was 16 one summer, and the family ate artichokes all the time. We never ate artichokes at home – nobody ate artichokes! I found out all sorts of interesting recipes from them, so that was part of my initial reaction – I was aware that they eat differently.

EAT: I noticed a lot of Vancouver Island in your new cookbook – tell me about your food experiences here.

L.C.: The interesting thing about a place like Bamfield – first of all it’s accessible only by boat or plane – you can get in by a long logging road but all the food comes in by boat. There’s one little store up there – lots of fish… They’re working with nothing and he gives the best dinner parties, this guy (John Evans, to whom Dinner Chez Moi is dedicated), cooking with what he has and … I don’t know, I have to analyze what it is he does that makes it so incredible. He’s just got it.

The first time I went to cooking school I went to Vancouver. I did a six month course there and I’d never been west of Toronto before that, so for me, BC is in part where it began. I did that course in 1998, and then I started coming back here about two years ago – so about ten years apart – I felt like I had come full circle.

EAT: What is your favourite technique from French cooking?

L.C.: I try to push the basics – sautéing is useful… I make soufflés a lot. A lot of braising, slow-cooked dishes.

L.C.: I don’t know – there are some great food trends. Quinoa! Quinoa is a fantastic food trend. Here’s my pet peeve: small plates. I don’t want 16 different plates of something when I order dinner.

EAT: If someone in France asked you to describe Canadian cuisine, what would you say?

L.C.: I would say that there isn’t one. There isn’t a unique Canadian cuisine. On the east coast we do a lot of British dishes, in my growing-up years it was quite English in a way, or English-American – apple pies, beef stew, roasts – that sort of thing. There’s no unifying cuisine here – we have cooking, but there’s a French cuisine, it’s a codified thing. There’s Italian cuisine, there’s Indian, there’s Chinese, there’s no Canadian cuisine.

The only place I can think of right now where there might emerge a completely new cuisine would be Australia, because they have British and French influences, and they have huge Mediterranean influences and a real mix of Asian and that’s sort of evolving into something that might be like a cuisine, eventually. We’re so much in flux. Cuisines are something that are established for a long time. French food is French food. It’s been that way for hundreds of years and it evolves very slowly. But we’re in a (…) mishmash. We’re in motion. You don’t get a cuisine out of motion, you get fusion and confusion. You don’t get a cuisine until the dust settles, I think.

EAT: How did growing up in rural New Brunswick influence your feelings about food and dinner parties?

L.C.: It influenced me because food was part of the community, because we’d get meat from the guy down the road, and milk from the guy up the road, and my grandfather’s gardens so food was a community affair. I think I’m very much a rural cook. Even in France – I did live in Paris quite a lot, but I also lived in Burgandy in the middle of nowhere too, so all these influences have been mostly rural, and I think that’s how I cook. I like food that’s very honest. I like it to be nice, but it’s not chic urban cooking. It’s very homey and rural. And entertaining is my social life. I don’t go out much – I don’t live like an urban person, I don’t go to bars and clubs. I like to sit by a fire and eat and have people pop by. That’s a very rural thing too, I think.

July|August issue on the stands. Read ...
Read More
Our apologies for an omission in this recipe in the Dec|Jan issue. In the instructions for making the filling, we neglected to add the milk to the ...
Read More