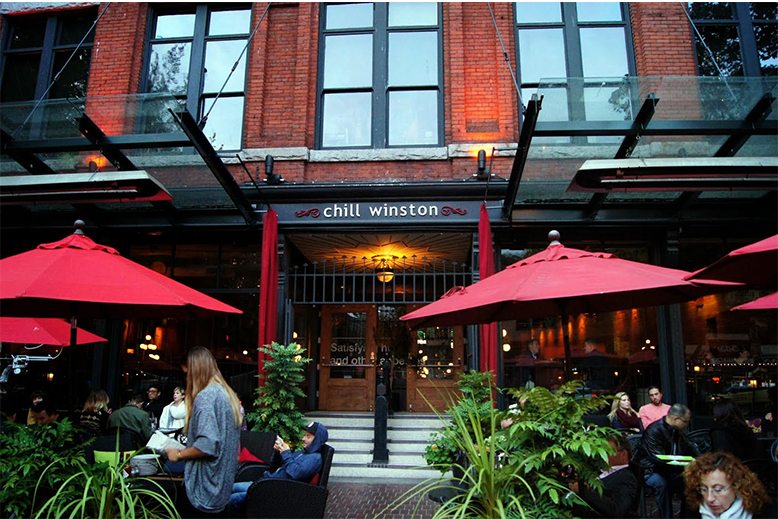 Is Gastown on it’s way to becoming the new Yaletown — an area with sky-high rents that only chains can afford?

When I heard this past summer that Chill Winston was going to close (it closed at the end of September), I was shocked but not surprised. I’ve known it’s owners for a long time now (I used to work there) and the sense I got from them, of late, was that they wanted a change. I could be wrong on this assumption and they might have just seen the writing on the wall and decided to get out early (hold that thought) much in the same way they got in at the beginning of the “big Gastown revival” way back in 2006. Whatever the reason, it doesn’t matter. But their closing is a big deal of sorts as it signifies a possible new phase for the hip area we now all love. When a neighbourhood like Gastown is littered with nothing but independents, as is currently the case, but soon will be presented with the reality of a dominant chain moving in, in this case, Local (Joey Restaurants Group owns Local). What does that say about the state of where things are headed?

I ask: Will Local be the beginning of the end of Hip Gastown?

It was the seedy underbelly many citizens ignored as panhandlers and street hustlers did their thing corner to corner. Far from being the vision of a David Simon TV Show on what the streets of Baltimore were like in another episode of The Wire, Gastown may not have been a ghetto, but it certainly wasn’t far off. Shots may not have been fired on the regular (The Purple Onion shooting notwithstanding), but drugs, alcoholism, homelessness and mental health issues* forged themselves within the area and created systemic fear for many. People, for the most part, stayed away, as did their businesses. However, with this fear and the passing of time came vacancy and cheap rent — two essential ingredients for up and comers looking to find a way in. For Neil Ingram, Co-Owner of Boneta, this presented he and fellow Co-Owner Mark Brand (he also Co-Owns The Diamond and Save on Meats) with a real opportunity to be at the forefront of a new phase for Gastown. “When we opened the state of Gastown was basically Water St. We were all committed to the idea of opening in the DTES and Carrall & Cordova was a borderline address. Most people couldn’t picture it even though it was literally the centre of the city: that needed to change.”

*I recognize a lot of those issues still exist. I wish they didn’t.

As independent places like The Alibi Room, Chill Winston, Boneta, Six Acres and The Irish Heather (in their new location) started taking off as the last decade came to end, a revival of sorts for the area began to take shape. There had always been businesses down here. Water Street most notably having the majority of them as tourist stores and the like dotted its many facades, yet, it wasn’t until 2009 and 2010 when things began to rapidly change. In 2010, the openings of both L’Abattoir and The Diamond respectfully helped usher in the promise of more as they excelled in great eats and wicked cocktails, breathing new life into the area. They became destination joints that helped cement the idea that it was okay to come here. Change in public perception takes time and there are several reasons to make it so. L’Abattoir and The Diamond helped to deliver upon this.

Cheap rent had found some takers and it brought with it the promise that the area would turn around.

It did and it has.

Gastown is now the most popular area in the city for locals and tourists.

New stores and restaurants open often with bright ideas and new images, each hoping to slide into the proverbial pie that everyone hopes to eat from. But there was in the beginning, and still exists, an attitude to it all, from the hipsterness of Revolver to the cheekiness of Gringo, the area — Gastown — had flair. It was run by independents, young men, and women looking to make a buck while saying, ‘no thanks’ to the corporate ideal. Hip it became, and if you wanted to be cool you went to Gastown. Late nights up at The Diamond back in 2010 meant you knew where to go. “Back here we have the Elk Room, password please?” It was exciting and Vancouver needed it. Many young entrepreneurs have thrived because of it.

But that was then and this is now. Gastown’s still cool, but not really. You can blame Chinatown and it’s even cheaper rent for that. Eventually, everything moves on.

Yet, none of this might have been possible without Chill Winston. Ah, the big patio money-printing machine in the middle of Gassy Jack square. Some will miss you, a few might not, but you were always there. Now you won’t be. Welcome to Joey/Local, please take a seat.

So where does this leave Gastown?

Who’s next to fall?

It’s going to happen, but the better question should be asked, should we care? Or for that matter, does it even matter?

I’ve long held the belief that Gastown would eventually become Yaletown; an area that was once cool but now isn’t but still tries to be. When cheap rents exist, creative minds come in and bring in new ideas. But as their businesses take flight, so too do the end of their leases. Landlords see the investment, increased foot traffic and in turn, jams the rent way up. Small businesses can no longer stay in the game.

With higher rents, businesses can either increase prices and hope to stay afloat — many do — or they fold up and close or move elsewhere. But then who can afford higher rents?

Will Water Street Cafe be next to sell and will Earls slid right in and take their place? How about a Cactus Club or another Donnelly? In five years how much different will Gastown look?

My best guess: quite a lot.

Look it’s not as if Chill Winston was breaking the mold of creativity with their business concept, but it was an original and that counted. The last thing Gastown needs is more of the same. And hey, I’m not looking to shit on Yaletown. I never go there so I don’t really care, and you can’t hate something you don’t care about. But Gastown, I still love. Taking in the atmosphere of the streets of Gastown as I stride on to work is always a hoot. So much to see and so little I can afford. Haven is really expensive! But it has charm. Again creative minds doing cool shit. I dig that. I dug Chill Winston. Was it perfect? No, but again, it was original. Sitting on that patio on a hot summers night had me at hello. I’ll miss that. Local will soon come in and change everything. They’re fine; they offer the best of what a chain can be. But that’s just it. I’ve seen that dance before. It’s not new and it certainly isn’t original. If this is the first domino then I’m sorry Gastown, but your days will soon be numbered. Many will continue to go and visit but how many will care? I sure won’t; and that’s a sad fate, one I hope I don’t see.

We already have one Yaletown, we don’t need another.

But in the end, all this doesn’t matter. Change is inevitable and Vancouver is growing. The changing fortune of those in Gastown will eventually be the same problem Chinatown will have to face someday soon and so on and so on. This all comes down to basic economics, as the city grows, so too do its neighbourhoods. But as Mark relayed to me recently when we spoke, his sentiment on Gastown’s future evolution comes down to personal perspective. “It’s all about your lens, it’s really genuinely about the lens your taking it and how that serves you and your agenda and what that is.

Where is it going? Maybe there is more stability. More money in these businesses means more taxes get paid and then maybe we can look forward to more things that are better for the neighbourhood. There are a 1,000 different ways you can look at this. But in reality, they (Chill Winston) had a great run! They didn’t sell out. They put 11 years into a business and they decided they wanted to do something else. That’s the dream. Kudos to them. Alibi’s been here for 17 years and look at how great they’re still doing. It’s all of these things that need to be apart of the conversation. It can’t be emotional. In 10 years if any of this is the same, I’ll be blown away.” For Neil, however, he sees it as an evolution of sorts and one that has happened before and probably will again and again. “Gastown has certainly evolved, but I’m not sure that’s the right word. It’s more like it’s reclaimed its place as a hub of restaurant, social and retail life that it enjoyed in the 70s & 80s. Different certainly but it’s a different city now and the divides are more extreme, unfortunately, everywhere.”

With that, I kind of have to agree with both Neil and Mark, the issue here isn’t with Chill Winston’s closure or Local’s impending opening, as guests will flock to both in very much the same manner. It has to do with me as I’m acting like an old fuddy-duddy, one who’s trying to cling to the dying idea of what Gastown was, instead of embracing and understanding where she’s going. I may not like it but again, who cares?

In 10 years Chill Winston will become a distant memory to most in Vancouver, only to be remembered by those who visited her. At least they’re leaving on a high note. I take comfort in that.

All right Local let’s see what you got.

You better not mess with that patio.

Born and raised in Saskatoon, Jamie Mah works as a bartender/sommelier at the Fairmont Pacific Rim Hotel. Currently finishing up his WSET Diploma, he loves all things hospitality. He’s also a contributing writer for Scout Magazine. You can usually find him shooting hoops up at Strathcona Park.
Photo by Jenny Lee

It’s popular to speculate about who might have pried open and slurped the sweet, briny meat of an oyster first. But here on the West Coast, the ...
Read More
In the next three issues, food writer Jill Van Gyn investigates the complex web of beliefs, values and opinions surrounding our food and its sources. ...
Read More
It’s thrilling to live on an island, surrounded by clean ocean waters. The spectacle of herring spawning in spring and ruddy salmon fighting up ...
Read More

The article on L’Apéro in the May|June issue should have stated Chef Andrea Maiolo staged at The Courtney Room and Zambri’s and that he held the ...
Read More
May|June issue on the stands. Read ...
Read More
Tickets are on sale for Canada’s Premier Cocktail Event! From October 4‐6, Art of the Cocktail returns for its sixth spirited season to celebrate ...
Read More