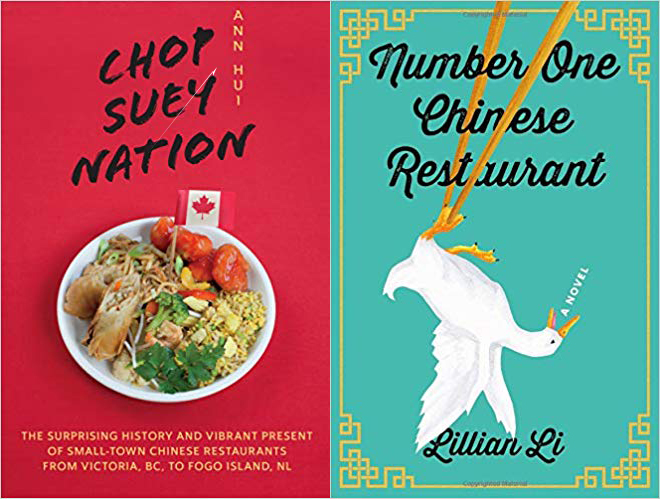 Globe and Mail reporter Ann Hui drove across Canada, from Victoria to Newfoundland’s Fogo Island, visiting dozens of Chinese restaurants. Like any food-obsessed, young Canadian, Hui looked down on chop suey cuisine as fake, westernized Chinese food.
She launches her book with a description of her Vancouver elementary school’s Chinese New Year lunch- “noodles stained dark with soy sauce, limp looking and glistening with oil. There was nothing mixed in with them except a few pallid bean sprouts. Next to the noodles was some kind of meat, deep-fried with a crunchy exterior and slicked in a fire truck-red sauce. I dipped my finger into the sauce and licked it. It tasted like the red Sugus candies Po Po my grandmother kept in a tin above the refrigerator.”
This memory and the question of why this non-Chinese Chinese food is served in restaurants in every small town and city across Canada inspired Hui’s quest. She and her husband drove across Canada to find out why these restaurants were so similar and what life was like for those running the chop suey joints.
Hui writes, “the restaurants all seemed to have the same red vinyl chairs, the same red-tasselled hanging lanterns, the same paper menus, often on placemats, always printed in the same font.”
The journalist starts her journey in Victoria where Chinese immigration began in Canada with the mid-19th-century gold rush, the birth of Chinatown, and work on the Canadian Pacific Railroad. She visits Don Mee in Victoria’s Chinatown, recognizing the menu’s classic chop suey cuisine, but also authentic dishes like shredded jellyfish and fish maw soup made with spongy, chewy, textured fish bladders.
“In my mind, a Chinese restaurant had always been one or the other-authentic or not,” Hui reflects. “But Don Mee seemed to be both. The restaurant had weathered over 80 years in Victoria. It had seen many generations of Chinese immigration and many versions of Chinatown. And whether by design or out of self-preservation, the restaurant had reinvented itself over and over again.”
Hui visits a chop suey joint in Star Trek-obsessed Vulcan, Alberta, another in a curling rink in Thunder Bay, one run by a small-town mayor, and dozens more with the same look and feel, even the same name.
“Often entire villages or families would wind up in specific areas,” Hui explains. “The Chows from Hoiping settled in Vancouver: the Tangs settled in Toronto: the Wongs in Kenora, and so on and so on.”
At the end of her travels, the writer learns her own family started life in Canada running Abbotsford’s Legion Cafe in the 1970s before Hui was born. It was a chop suey Chinese restaurant.

Lillian Li’s novel, Number One Chinese Restaurant, uses fiction to delve even deeper into the family business and the ties to China of every North American Chinese restaurant. The Beijing Duck House in Rockville, Maryland near Washington, D.C. is a multi-voiced, cleverly imagined world that Li conjures so vividly that the characters come to life with the messy complexity of real people. Always haunted by the ghosts of the old country, the complex narrative’s familial, class, age, and sexual dynamic pulls the reader deeper and deeper into the tragedy and transcendence of life within the Beijing Duck House.
The successful business is the product of decades of obligation, Oedipal undercurrents, simmering interpersonal conflicts, and loving friendships. Youthful lust, a mid-life crisis, geriatric love affairs, failing health and sickness, and a fiery explosion sear the vividly drawn lives within the pages of Number One Chinese Restaurant. After reading the novel and Chop Suey Nation, you’ll never experience another Chinese restaurant without thinking of the lives and history that makes your meal possible.

The 6th edition of The Okanagan Wine Tour Guide is just what it says, a wine tour guide to the wineries located in British Columbia’s ...
Read More
It often surprises me how easy it can be to take for granted, or even forget, just how incredible this island is. Sometimes it is a visitor who helps ...
Read More
Shawn Soole’s latest book swings open the doors to the world of Canadian cocktails CHIPPENHAM, UK, 20 September 2019—Hidden in the vast northern ...
Read More
From the opening description of his first legal glass of beer in 1960 at a beer parlour in Victoria’s Ingraham Hotel through several chapters ...
Read More
If you or someone you love has severe food allergies and dietary restrictions, Amanda Orlando’s new cookbook is for you. Most of the recipes ...
Read More
Three Times a Day, the new cookbook from Marilou and Alexandre Champagne, makes one very astute assumption about its readers. No matter your dietary ...
Read More

Superflux Cabana has opened upstairs at 804 Broughton St (the former location of The Livet). Featuring lots of Superflux beer and a menu that ...
Read More
January|February issue is on the stands! Pick up a copy, or read the digital version. Read ...
Read More
“May/June 2016 Issue”   READ Features: An Afternoon with Salt & Pepper Fox • A Visit to the Cowichan Pasta Company • ...
Read More