The kitchen crew at Cibo. Massimo Bottura is 4th from the left and to his right is Neil Taylor. Photo courtesy of Cibo

Last weekend I was in Vancouver as an invited guest for a special dinner at Cibo Trattoria. I love the down-to-earth cooking at Cibo and Chef Neil Taylor never fails to impress. But this dinner was very different. For two nights, the Cibo kitchen was taken over by Italian Chef Massimo Bottura for a taste of Euro cooking as high culture.

Bottura is considered one of the world’s top 50 chefs and is known for his eccentric flavour combinations and scientific approach to cooking. By the end of the evening— seven courses later—I had tasted: shaved fresh truffles and an intense sea urchin concentrate with blueberries; a morel stuffed with headcheese floating in an acidified veal broth; a green mystery vegetable simply called Chlorophyll; and a Sicilian granita that pitted briny capers against bergamot and coffee jelly. Was it provocative? You bet your molecular gastronomy ass. Did it taste good? Good is subjective and harder to pin down.

There were no bones to gnaw on, spicy salsa to slather, or garlicky spaghetti to slurp. But there was plenty to think about, to talk about, and to simply gawk at and appreciate the inventiveness of his culinary design. This is cooking for the brain rather that the body. Intellectual rather than lusty. 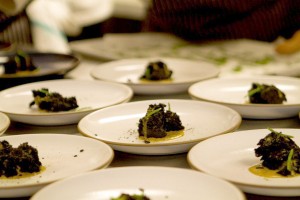 A Reef on the Adriatic Sea - seaweed, mussels, clams and black squid ink

To help us better understand what we were about to eat, Bottura introduced each dish with a story. The truffle/sea urchin/blueberry dish was a tribute to southern Italy’s migrant workers who have to take a 1000-kilometer train ride north to find work. The single stuffed morel alone in a bowl of clear broth was Bottura’s untraditional take on the traditional cuisine of his home region, Emilia-Romagna (which typically features comforting stuffed pastas in meat broths).

The Emilian Barbecue was Bottura’s attempt to present a safer barbecue. He explained that grilling meat creates carcinogens and so he would cook veal tenderloin that would replicate the flavour of the grill but without the fire and char of the grill. To achieve this Bottura first made some ash* by baking vegetables down to a fine powder, which he then used to coat a piece of veal tenderloin to simulate the look of grilled meat. Then he sealed the veal in a plastic bag and immersed it in a temperature controlled water bath (sous vide technique). No fire, no foul. The resulting veal was extremely tender and interesting but I missed the visceral satisfaction of sizzled fat. (*Primarily used in cheese making, edible ash is one of the hot culinary trends this year.)

At times during the evening, in a few of his accompaniments we caught the occasional glimpse of an earthier version of Bottura. Everyone at our table fell in unconditional love with his creamed olive oil potatoes—smooth, light, rich, luxurious, potato-y. If you’re a food lover, you’ve probably swooned over, heard about, or tried to make, Joël Robuchon’s pommes purée—considered the ultimate mashed potatoes. Bottura did Robuchon one better – and that alone made the night completely worth it. I also loved Bottura’s homemade balsamic vinegar and his apple mostardo that went with the ash-coated veal tenderloin; his perfect risotto – all creamy and al dente that came with the truffle/sea urchin/blueberry; and his deconstructed Tiramisu which, with the help of foam, coffee gelatin and amaretto powder, turned a tired cliché into luscious dish of contrasting textures and flavours. 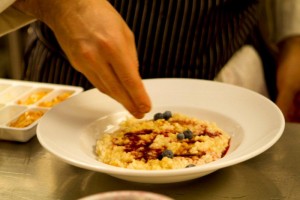 Would I choose Bottura’s cooking for my last meal on earth? I don’t think so. But as tablemate Alexandra Gill speculated, it was a bit like eating haute couture. I agree. I love the spectacle of high fashion and seeing the parade of inspired ideas but it’s not going to be what I wear on a daily basis.

Still, one day Bottura’s cuisine might inspire chefs toiling in the trenches the way another European, Ferran Adrià, once did. Who knows, the next time you order a grilled T-bone it just might come covered in ash. All in all, an extraordinary evening.

A special note of thanks must go to Cibo general manager David Fert for not only making this astonishing dinner possible who, together with Cru Wine Selections, found and paired amazing wines for the dinner.

See below for the menu and wines.

VIAGGIO in ITALIA (Journey to Italy)

A Reef on the Adriatic Sea

West to East: from Romagna to Emilia 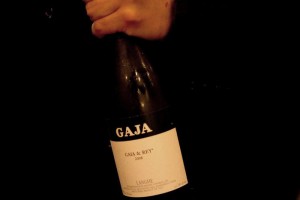 With Phase 2 beginning, restaurants and patios, tasting rooms and coffee shops are reopening. This is an ongoing process, with many changes, so we ...
Read More
The Buzz Up-Island  It’s high time for festival season! I anticipate this time of the year all year long when fresh produce is in abundance, ...
Read More