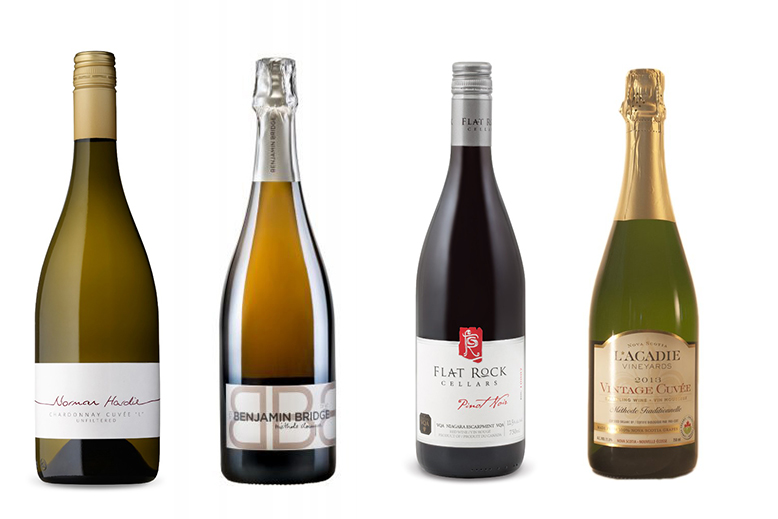 At the Vancouver Wine Festival 2017 only six attendees at a standing room only Coast to Coast media and trade seminar who, when asked if anyone had visited the Ontario and Nova Scotia wine regions, raised their hands. I was one of them. Admittedly I had an edge with Ontario as I grew up near Niagara and still have an opportunity to visit often. A couple of press trips to Nova Scotia introduced me to the beautiful Annapolis Valley and its bourgeoning wine scene. During the seminar a panel of wine makers and journalists educated (and often entertained) us with tales and tastes of their provinces’ wines.

The seminar was not my first introduction to Niagara’s steely Rieslings from Thirty Bench, Tawse and Flat Rock Cellars, or flinty Chardonnay from Hidden Bench and Trius. The region’s fossil laden soils are responsible for the stone and mineral qualities of the wines. I had had the pleasure, too, of trying Norman Hardie’s Burgundy-like Chardonnays from Prince Edward County, that limestone headland that juts into Lake Ontario just ahead of the St. Lawrence River but whose climate can be very tricky for growing wine grapes. (Temperatures can dip low enough to require the labour-intensive process of burying the canes in the winter to protect the vines.)

But until the “Poised for Pinot” seminar I was quite unaware of the potential of Ontario’s Pinot Noirs. Norman Hardie nailed it again with a wine that smacked of fresh cherries and that limestone mineral essence. As did Rosehall Run, another offering from Prince Edward County Niagara’s Flat Rock Cellars treated the mid-palate to chocolate and cherry. Thomas Bachelder, who also makes wine in Burgundy and Oregon, presented his Lowrey Vineyard Pinot Noir from Niagara’s St. David’s Bench, a lean sinewy stunner echoed Burgundy with its floral perfume, raspberry/cherry notes and stony “lift” in the finish. I certainly had not been “poised” for Ontario Pinot Noir’s charm and restrained elegance.

Nova Scotians are an outgoing lively bunch. And so are the wines, with white wines heading the pack. There appeal is in their crisp, fresh fruity style. Many of them doff their caps to L’Acadie Blanc, a hybrid grape that when done well turns out a aromatic and fruity number that dances a brisk jig with the Nova Scotia’s sublime seafood. But where the real potential lies is in the bubbly wines. I believe it was UK journalist and blogger Jamie Goode who opined during the sparkling wine plenary that with global warming he could envision Champagne houses perhaps investing in Nova Scotia. That’s quite a statement. Gathering from the queues at the Benjamin Bridge, certified organic L’Acadie Vineyards (whose owner wine-maker, Bruce Ewart’s wine-making roots hearken back to BC) and Blomidon tables, perhaps the punters thought so too. No doubt jogged along by winemaker Simon Rafuse’s personality which is as effervescent as the wines, I was particularly enamored of the Late Picked Chardonny (sparkling) 2011. Akin somewhat to Ontario and BC VQA is the recent-ish Tidal Bay appellation, which guarantee that the wine in the bottle is 100% Nova Scotia grapes and undergone some pretty strict scrutiny.

If the Coast to Coast seminar were to be repeated next year, I’ll wager far more hands would go up. I think over the next few months a few more trade/media knocking on Canada’s winery doors.

For the ninth year in a row Rancho Vignola is setting up its Vancouver Island Harvest Sale here at the Mary Winspear Center in Sidney. Many of ...
Read More
Season’s Greetings EAT readers! We at EAT are looking forward to all the wonderful seasonal baking on offer around the city. One of the great joys ...
Read More
Masterclass Candied Citrus Holiday ...
Read More
November | December issue on the stands. Read ...
Read More
The craft beer explosion in Vancouver has barely exploded and is still going strong, and now the spirited side of things is starting to heat up. Hard ...
Read More