The words “craft cocktail” make most Vancouverites think of one particular area – Gastown. While there are obvious exceptions, and some great ones at that, the concentration of stellar bar programs here is staggering. Cocktail culture in Vancouver has been growing so dramatically over the last few years that most of the top establishments are no more than three years old. One of the most notable has to be L’Abattoir.

Located in Gastown’s iconic Blood Alley, a drink’s throw from Gassy Jack, the award-winning French-influenced restaurant and impressive wine list is reason enough to visit. Add in their solid, simple, and classic cocktail program courtesy of Head Barman, Shaun Layton, and you have reason enough to visit regularly. Though the name (slaughterhouse) refers to one of several unconfirmed legends of Blood Alley’s past (the others include it being an execution site and Vancouver’s first prison) and the refurbished, century-old brick walls alongside tile and hanging antlers give the impression of both formality and Tobe Hooper, L’Abattoir is in fact quite casual and friendly. They were even named “Best Casual Restaurant” at this year’s Vancouver Magazine Awards.

Casual accolades aside, the food and cocktails are as sophisticated as you could want, and Layton has found a comfortable niche for his bar that marries classic style with subtle, modern sensibilities. The “Classic Cocktails” menu is a collection that includes some sadly forgotten ones, and a look through the “Originals” reveals a strong, balanced selection that often extends on the classic ideals. The “Slaughterhouse”, for example, is a Sazerac variation, decorating Cognac with Elixir Vegetal, aromatic bitters, and some orange oil and Green Chartreuse mist. The “Clover Club Refashioned” is simply the original refreshing Clover Club with added mint and sweet vermouth.

There are lighter sippers for the less initiated, combining modern juices and liqueurs (try the “Gastown Swizzle” on a hot day), and even a beer cocktail using a chili-infused Tequila, but talking with Layton or his right-hand-man David Greig reveals they are much more interested in a well-balanced spirit-focussed cocktail. This is further evident by eyeing the tilted backbar shelves, covered in rare gins and whiskies plus a collection of unique products that are hard to get here in Canada.

It has been a good five years since craft cocktails and mixology have become commonplace in Vancouver. There are upwards of fifteen high-quality cocktail bars in downtown alone, and Layton places the city alongside the best in the States. “A lot of bartenders have gotten over themselves and are just worrying about good drinks and pleasing customers. Our culture is really growing up – I haven’t made a Mojito or touched the vodka in over a year. This year I’ve been all over the U.S., and in terms of the volume of bars and the quality of spirits, there’s not much setting them apart from us anymore. Our crowd is not quite as knowledgeable, but it’s getting there.”

With Vancouver;s status as a craft-cocktail city, there are factors outside the mixing glass Layton feels puts us above the rest, namely the quality of customer service. “Our hospitality is fantastic – that definitely sets us apart. Also our ability to deal with not being able to get so many great products, and the fact that most of our best bars have high quality food, whereas a lot of bars in the States just focus on drinks. In Vancouver, we can’t do that.”

With the maturation of the scene in general, Layton feels there are positive shifts in the mentality of not just the bartender, but also the customer. “It’s becoming less about mixologist and more about having a good clientele. It’s more or less just spending time concentrating on your guests, more about quality spirits, and the homemade thing is going away. A really good drink is something you’re going to have again and again, not something you’ll have once just to say you’ve had it. It’s the same with the food industry – it’s gotten away from being too high-dining focused because you don’t want people to only come to your restaurant once every six months. If you become too novelty in your bar, and you find you go there just for the experience, and you feel frowned upon for having a beer instead of a cocktail, you’re not going to go very often.”

Layton has chosen his “Butchertown” cocktail to share, which is probably the most interesting on his menu. Named after an actual town in Kentucky, Layton designed the drink around two of the state’s major exports – bourbon and tobacco. Dry vermouth gives a different balance to each of the ingredients, allowing the bitterness of the Cynar and Becherovka to be more present, and just a touch of rum to hold things in place. It’s a quite dry and complex cocktail, and definitely a must-try for any enthusiast. 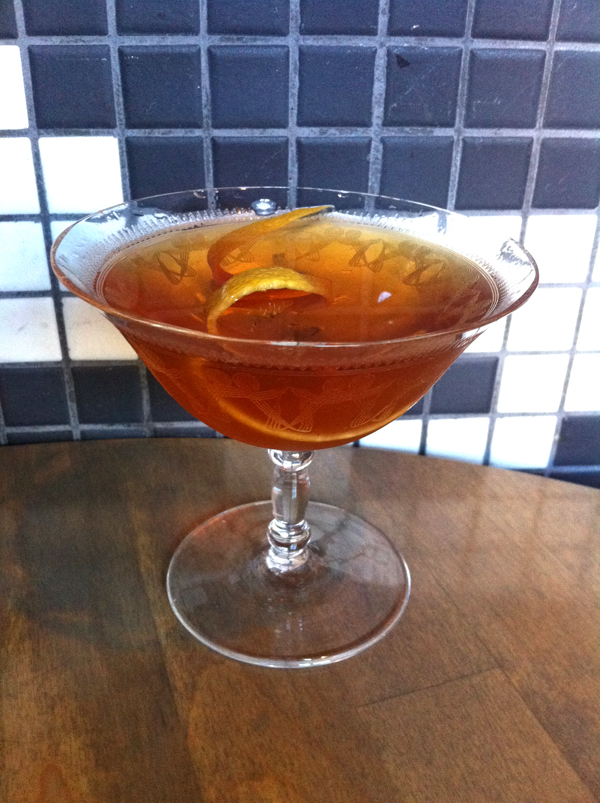 The Butchertown. Photo by Rhett Williams

Combine all ingredients with ice, stir, strain into a cocktail coupe. Garnish with a lemon twist.

July|August issue on the stands. Read ...
Read More
Old favourites are taking their rightful place in the food spotlight. In the past five years, the health-food industry has offered up a dizzying ...
Read More