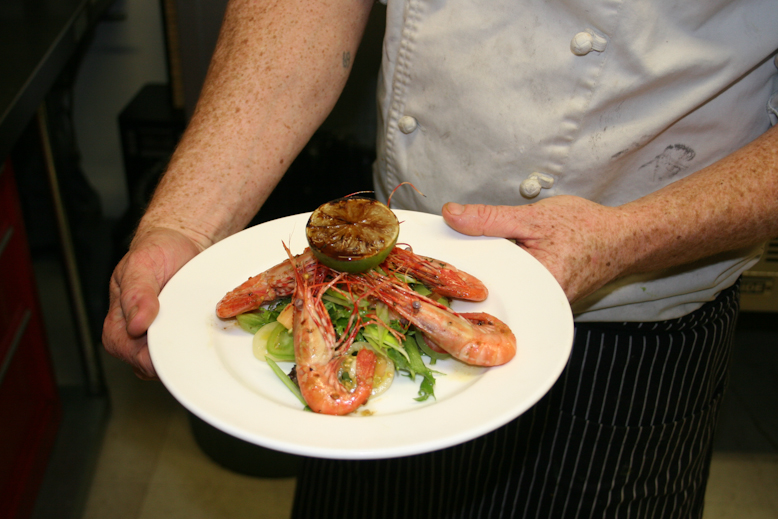 As I type this, the fishing boats are just beginning to come in to Cowichan Bay with the first catch of spot prawns.  The spot prawn, a world famous delicacy and special to Vancouver Island, is being celebrated at a number of venues over the next couple of weeks.  Not only are spot prawns delicious, but also they are a sustainable and well-managed resource.  Eat Magazine sent me, your fearless reporter, out on the road for the scoop.

1:  Spot Prawn Festival at the Victoria Public Market.  I went down to meet Maryanne Carmac, erstwhile Eat reporter, and now general manager at the Public Market.  The festival at the market, happening May 17–18, has a lot to offer Victorians this year.  There will be tastings, and cooking demonstrations by a number of excellent local chefs.  Cormac highlighted the participation, for example, of Les Chan, a well-known emissary of Chinese cooking in the city.  “Because we are right beside Chinatown,” she explained, “it is important that we start bridging the culinary gap between ourselves and that neighbourhood.  It is such a huge part of Victoria’s history.”

While I was at the market, I had the chance to sample a salad made by chef Leana Meyer at Cowichan Bay Seafood.  The salad, made with prawns, apple, mint, fennel, and chipotle dressing, made for an excellent, light lunch.  The spot prawn, as you will 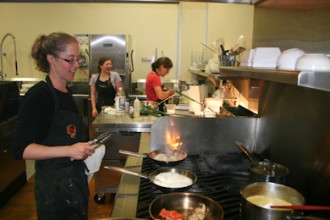 learn from watching the cooking demonstrations and wandering about the festival, is such a great ingredient because of the number of ways in which it can be prepared.  The possibilities are limitless. (For recipes the current issue of EAT for a Spot Prawn Cobb Salad or visit the Wild BC Spot Prawn website

2: Next day, I went to Cowichan Bay with Nick Versteeg , a documentary film-maker and emissary for the slow food movement in Cowichan who is overseeing the Cowichan Bay Spot Prawn Festival this year.  A philosophical man, committed to the quality and development of local agriculture and businesses, Versteeg engaged me in much conversation on the rich history and the doings of Cowichan.  The village itself, once known as a hangout for bikers and other such sorts, is now entirely transformed with  gourmet shops offering local and delectable products.

At the Cow Café and West Coast Grill, local chef Matt Heyne worked up two dishes for me to try.  The first was a spot prawn salad with heirloom tomatoes and a pear vinaigrette.  Next (and here was the real showpiece) spot prawns and filet mignon on a bed of mashed Yukon gold potatoes and hollandaise sauce. Although this has nothing to do with prawns, I should note that the café also has excellent clam chowder. 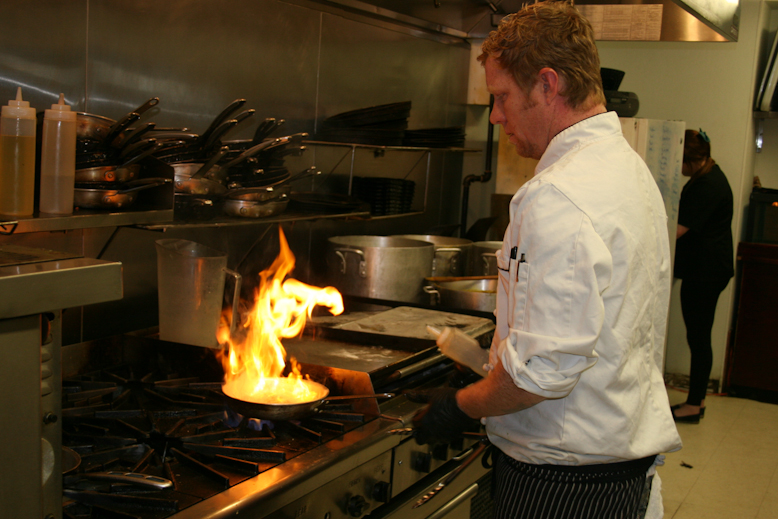 It was an excellent day, which began among the bobbing fishing boats in Cowichan Bay and ended with me heading back on the Malahat in the dark. The festival in Cowichan Bay this year, along with chef demonstrations, wine tastings, and whale watching, is going to feature a very large vat of boiled prawns for the public to devour by the bucket load.  This is my idea of happiness.

The article on L’Apéro in the May|June issue should have stated Chef Andrea Maiolo staged at The Courtney Room and Zambri’s and that he held the ...
Read More
May|June issue on the stands. Read ...
Read More
Sun Peaks, BC (January 10, 2012) – Four events are already sold out and less than 70 tickets are available for the signature event of the 14th ...
Read More