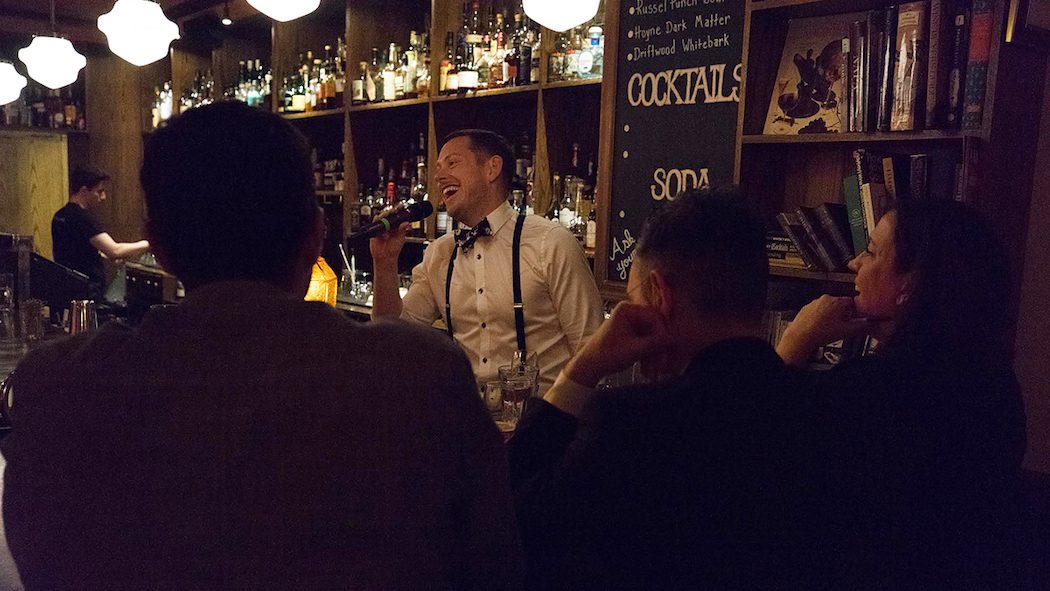 Last Wednesday, I judged my first cocktail contest. Along with Peter Zambri, owner and chef at Zambri’s Restaurant and Peter Hunt, the master distiller and president of Victoria Distillers, I perched at the end of the bar at Little Jumbo and watched as eight new-ish and experienced bartenders duked it out. The Petes and I agree that we want to judge all the cocktail contests, everywhere, all the time. That would make for a lush lifestyle to be sure, but really. It was that fun.

Not surprisingly, the event sold out. With Little Jumbo’s speakeasy ambiance and Nate and Kyle of Nimble Bar Co. at the helm, it was a non-miss. The charming Josh Boudreau hosted, keeping us all entertained and informed and making sure the contest stayed on track.

The bartenders names were drawn from a hat, two going head-to-head at a time. In the first round, they were being asked to simulate the real bartender experience. They were handed a chit with four drinks outlined – two shaken, one built and one stirred. We watched for efficiency, accuracy, knowledge, presentation and of course taste (balance, texture, dilution). We kept our eye on cleanliness, confidence and entertainment. A tall order. The clock was ticking on this one.

Four were eliminated from this round, leaving Jayce, Brian, Karissa and Brett ready for round two. However, all was not lost. The remaining four had the chance to redeem themselves with a free pour contest and Raven Dales from Pagliacci’s was back in the game.

Round two involved a flight that included a spirit, beer and wine. Each contestant had to identify the type (whisky, lager, Riesling, for example), got extra points for the actual brand and were also marked on their salesmanship aimed at the judges. Contestants were asked to define characteristics of each, as though they were recommending a drink to a thirsty patron. Bitter, smooth, smoky? Tones of caramel, pear, vanilla? This round was tough and left us impressed. We were down to two final contestants.

Another redemption round commenced, with two contestants competing head-to-head with a gin fizz. Brett Lantz from Little Jumbo landed himself in third place overall, with a fantastic creamy fizz that I would have gladly held on to had I not already tasted upwards of fifty cocktails at this point.

Final round. Raven Dales from Pagliacci’s and Brian Newham from The Diamond were left standing.  Things were getting tense. Executive Chef Gabe Fayerman-Hansen prepared a special dish for the competitors to pair. A grilled Pacific octopus with potato hash, ‘nduga (a spicy pork salumi) vinaigrette, salted cucumber, crème fraiche, preserved lemon. The dish was spicy, salty, intense, smoky, satisfying. We needed something that wouldn’t be overpowered by these flavors. Something with a bit of brightness, with depth and strength and just a touch of sweet. Raven and Brian were presented with a black box containing nine ingredients. Each had to choose at least three of the ingredients to include in their cocktail. Both having backgrounds in the kitchen, we knew this would be a tight competition. The black box contained cucumber, cilantro, dill, Odd Society Mia Amata, ruby red grapefruit, hoisin sauce, yuzu juice, rice wine vinegar and radish. The crowd hushed. The contestants mulled over the dish, considered their recipes and went to work. Heads down, music tense, we watched as they started to build. Raven was up first. The “Situational” was set down in front of us. We tasted a beautifully presented cocktail of bourbon, Mia Amata and cilantro topped with an egg white foam. It was well balanced, delicious and a fantastic pairing. Raven was definitely in the running.

Then Brian. He presented us with the “Guilty by Association”, a wonderful blend of bourbon and  Cocchi Americano, with top notes of cucumber and grapefruit. The flavors went on from the first sip on the tip of our tongues to the last hint at the back of our throats. A touch of yuzu provided the sour, hoisin and a dash of demerara syrup made up just the right amount of fragrant savory-sweetness.  The twist and the flamed grapefruit presented a subtle aroma on the nose and added a bit of fire-y finesse. We couldn’t deny it. This contest was very close. Brian’s combination of experience, palate and dead-on balance put him in first place.

We hope to see such a contest again and the Nimble boys assure me it’s in the plan. It keeps bartenders fresh, creative, stimulated.  It was a pleasure to watch the bartenders I know and to meet the ones I didn’t. We all know that Brian Newham is a natural talent behind the bar and his friendly demeanor makes it easy to hang out there. Now, let’s watch as Raven, who has only been at this bartender thing for a half a year, inevitably rises to the same status.

Add two or three cucumber wheels to a mixing glass and muddle lightly. Add remaining ingredients except grapefruit. Give it a stir with ice. Strain through a fine sieve into a rocks glass and garnish with grapefruit.

Shawn Soole’s latest book swings open the doors to the world of Canadian cocktails CHIPPENHAM, UK, 20 September 2019—Hidden in the vast northern ...
Read More
It’s all about cocktails, the home bar, what to buy, and what to serve. Founders Kyle and Nate launched their bar consultancy, The Nimble Bar ...
Read More
It’s almost summertime. And in case you didn’t know, that means gin cocktails on the patio. Vancouver Island has a plethora (yes, I just said ...
Read More
Press Release — Legendary mixologist Lauren Mote and Four Seasons Resort and Residences Whistler have joined forces again to elevate the Spirit of ...
Read More
Different cocktails have different philosophical traditions attached to them. At least this is how I see it. I still reject the notion that, just ...
Read More
British Columbia’s licensed restaurants, bars, manufacturer lounges and caterers will be able to age and infuse liquor in order to create their own ...
Read More

The article on L’Apéro in the May|June issue should have stated Chef Andrea Maiolo staged at The Courtney Room and Zambri’s and that he held the ...
Read More
May|June issue on the stands. Read ...
Read More
Brewery and the Beast is a magical event for meat-lovers. Meant as a bit of a de facto industry showcase for Two Rivers Meat, Phillips Brewing ...
Read More