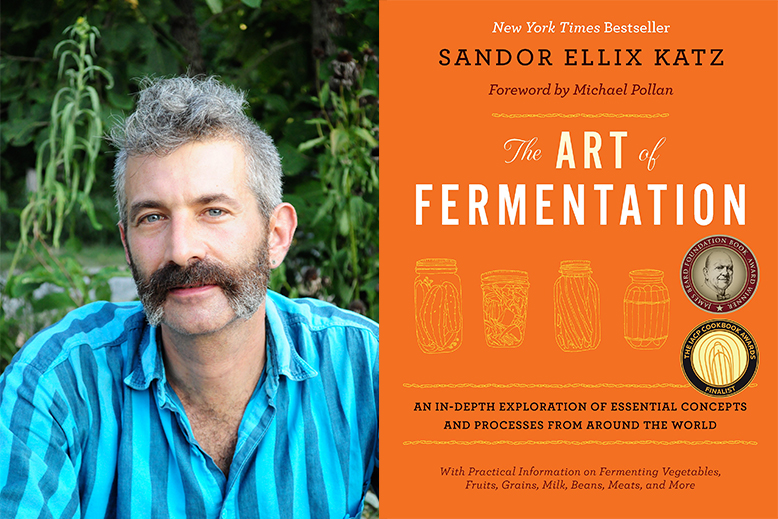 Let’s face it, homesteading is hot. Whether it’s trying to make your own pickles, or cure meats, or just messing around with kefir or kombucha, many people are trying to do their own fermentation at home. Not only is it an amazing way to preserve things, or create new and unique flavours for foods, but preservation has a range of macrobiotic benefits. Preservation has been a key part of the human diet since at least Neolithic times, but in the last century or so we’ve ceded our knowledge of how to preserve to large-scale operations, and we’ve bought our fermented products from chains and grocers.

If you’re looking to take back a little of the power to make your own preserves, and impress your friends all at once, you might want to think about stopping in to listen to Sandor Katz at the Health, Wellness & Sustainability Festival on February 7 in the Victoria Conference Centre. I had an engaging conversation with Katz about his experiences with fermentation and preservation. Consider this a primer.

As a child, Katz was one of those children who were more attracted to vinegar and the sour flavours than to sugar. This proclivity formed the basis of a life-long fascination with the taste of fermented foods. In the course of moving from New York City to Tennessee, in search of opener spaces to grow and explore, Katz has become an erudite and passionate spokesperson for the preservation of food.

Although virtually anything edible can be preserved, Katz recommends that people start with vegetables. Vegetables are the safest and easiest thing to ferment, and even if you completely mess up the recipe, you won’t be the worse for it if you consume them. Beyond the macrobiotic properties that I already mentioned here, and in my own article on pickles, there is also the social aspect to consider. Katz points out that the making of preserves is a social undertaking. Sharing jars of homemade stuff with other devout picklers is an act of community building. Dividing a kombucha momma for other people to begin their own tea operations at home is an act of good karma.

Thus, the pursuance of pickles, kombucha, sour dough breads, yogurts, homemade salamis, miso, smoked meats, and a myriad of other products create both an informal gift economy, make for fun collective social activities, and reduce an individual’s dependence on corporate distributors. What isn’t to like?

In that respect, the art of preservation, as an aspect of the practice of health and wellness, provides a meeting point for a lot of current interest that we see around Victoria. There is something here for those people who want to eat healthier, purer food; for those who are aware of what it is their they are putting in their own bodies; for the homesteaders, who want to do as much as they can for themselves; and for people who want to build community ties through the practice of making and sharing their own food products. No doubt, there is something here for you.

I spoke to Sandor Katz for some time about his life and philosophy—he has a lot to say and it is fascinating—but rather than recount it all, I want to suggest that you go and listen to him yourself. I’ll be there, and I hope to see you, too.

July|August issue on the stands. Read ...
Read More
Vinegar -one of the most important discoveries in food history dating back to ancient times and used around the world by almost every nationality, ...
Read More