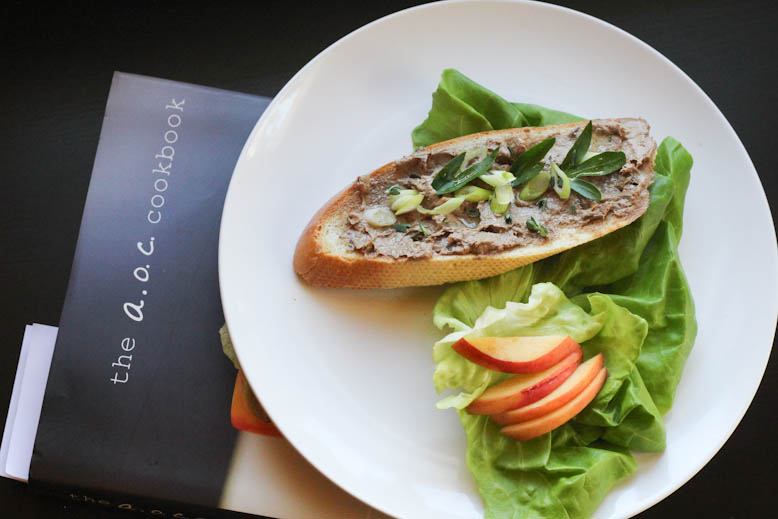 There’s an incredible weight to The A.O.C Cookbook. It’s a hardcover after all, but each recipe requires foraging, farmers’ market bartering, or a thoughtfully organized mise en place. Adapting restaurant dishes for an at-home audience will always present challenges, but A.O.C.’s Suzanne Goin makes the transition look effortless.

Goin, who also authored Sunday Suppers at Lucques, has won two James Beard Awards, one for best cookbook (Sunday).  With AOC, Groin makes her world-class recipes and flare accessible through this well-written and easy-to-understand book

Her writing, both during straightforward kitchen procedures and more narrative-driven passages, feels conversational, as if you’re sat down for a meal with Goin at one of her four Los Angeles restaurants, just listening to her talk.

“We knew we wanted the restaurant to be about tasting, about food and wine, about celebrating artisanal products and foods with traditions and stories behind them, about sharing and appreciating food. I kept thinking it should be the name of a wine or cheese, but I couldn’t find the right one… I realized that the names I was most drawn to all had one thing in common— they were A.O.C. cheeses. Appellation d’Origine Contrôlée is the French government’s system for regulating and designating wine, cheese, and other artisanal products.” 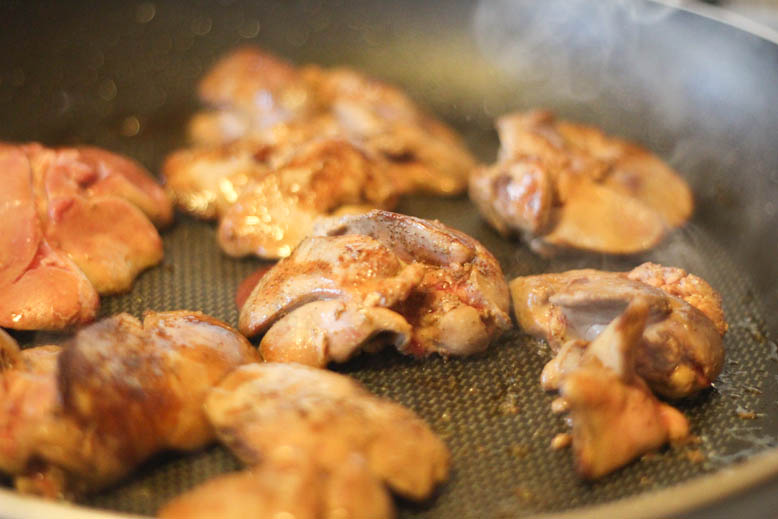 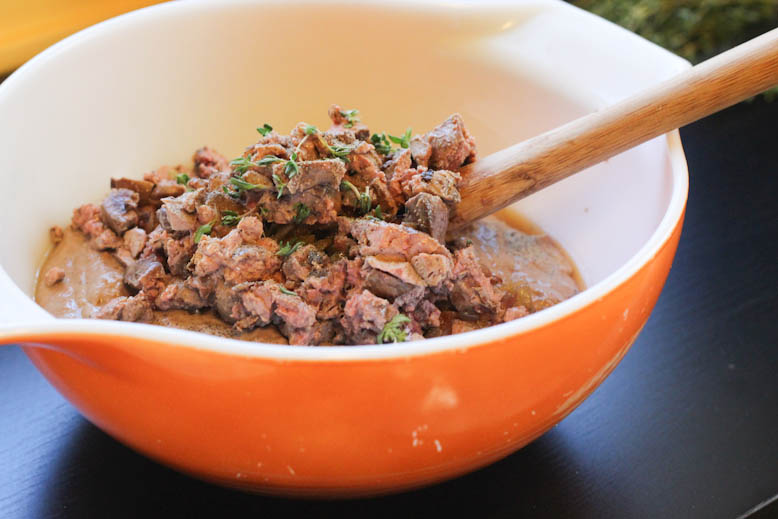 I always have trouble deciding on one recipe amidst an entire book of possibilities, so while Goin had a beautiful story behind each of her choices, I used my foolproof trick of flipping through each section (charcuterie, salads, fish, meat, vegetables and from the wood-burning oven) and picking a page at random. Thankfully I didn’t land on From the Wood-Burning Oven chapter, but I did score a selection from Charcuterie: chicken liver pâté.

Pâté sounded tricky, but I found the recipe both easy to follow and surprisingly simple. The only downside to pâté is tracking down fresh liver. I don’t suggest making this recipe on a Wednesday, as multiple grocery stores confirmed their liver delivery is strictly Thursday. After an across town trek, I snatched up a pound of fresh chicken liver at Fairways on Quadra. 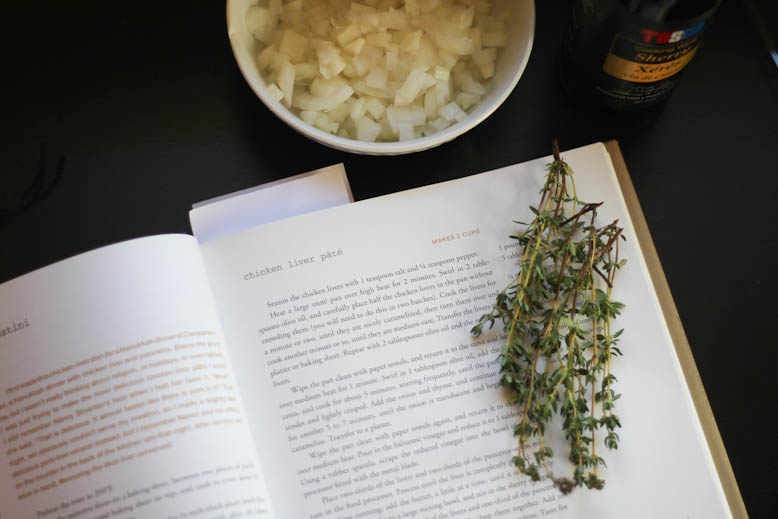 I think the balsamic vinegar, rendered pancetta and fresh thyme are the star ingredients, don’t scrimp on these!

My one criticism of A.O.C. is the lack of instructions for serving and storing food. As it’s based on restaurant cooking, the dishes are designed to be eaten immediately. Keep this in mind when preparing in advance. For example, the pâté made well over three cups of spread, which I’ve stored in an airtight container in the fridge. Aside from Goin’s suggestion the pâté be served on crostini, I’ve also spread it liberally in banh mi sandwiches.

For those not afraid of a weighty read, The A.O.C Cookbook deserves your attention, whether it’s for the writing, recipes or effortless photography. 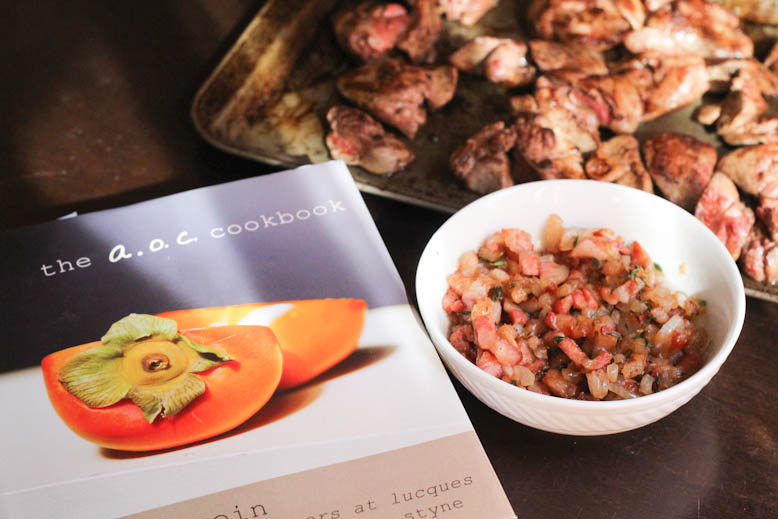 Heat a large sauté pan over high heat for 2 minutes. Swirl in 2 tablespoons olive oil, and carefully place half the chicken livers in the pan without crowding them (you will need to do two batches). Cook the livers for a minute or two, until they are nicely caramelized, then turn over and cook another minute or so, until they are medium-rare. Transfer the liver to a platter or baking sheet. Repeat with 2 tablespoons olive oil and the remaining livers.

Wipe the pan clean with paper towel, and return it to the stove and heat over medium heat for 1 minute. Swirl in 1 tablespoon olive oil, add the pancetta, and cook for about 5 minutes, stirring frequently, until the pancetta is tender and lightly crisped. Add the onion and thyme, and continue cooking for another 5 to 7 minutes, until the onion is translucent and beginning to caramelize. Transfer to a platter.

Wipe the pan clean with paper towels again, and return it to the stove over medium heat. Pour in the balsamic vinegar and reduce it to 1 tablespoon. Using a rubber spatula, scrape the reduced vinegar into the bowl of a food processor fitted with the metal blade.

Place two-thirds of the livers and two-thirds of the pancetta-onion mixture in the food processor. Process until the liver is completely puréed. With the machine running, add the butter a little at a time, until it’s all in there. Transfer to a large mixing bowl, and stir in the sherry vinegar.

Place the remaining one-third of the liver and one-third of the pancetta-onion mixture on a cutting board, and roughly chop them together. Add to the puréed liver mixture, and stir with a rubber spatula to combine. Taste for balance and seasoning.

I still remember my entry-level wine class all those years ago, working through basic characteristics of key grapes. I knew next to nothing, and felt ...
Read More