Chef Ned Bell has always been a loud proponent of the sustainable seafood movement, so it was no surprise that when he took over the executive chef position at The Four Seasons’ Yew Restaurant in Vancouver, he began to reimagine the menu with a sustainable bent. Last month, on World Oceans Day, Bell took the final step and, officially re-launched Yew as a fully Ocean Wise-certified, seafood-centric restaurant.

Chef Bell was kind enough to give me a quick cooking lesson using a particularly delicious form of sustainable seafood – halibut cheeks. If you haven’t given these a chance yet, then get thee to a fishmonger, stat! Halibut cheeks have a lovely, fatty richness, but are also slightly firmer in texture than, say, black cod, so they stand up to a little sauce or being mixed into a stir-fry.

For this recipe, Chef uses a lemon olive oil he infused himself. You can infuse your own oil at home quite easily, or just add a few squeezes of lemon to the cheeks after they are done, while still in the pan, and nap the lemon juice over them along with the oil.

PS. A little butter thrown in with the oil adds an extra hit of richness to the cheeks!

This recipe is very simple, and could be substituted with scallops, spot prawns, or really, any other fish or seafood. 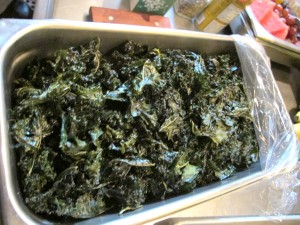 For the Kale Chips:

Pre-heat your oven to 300 degrees F. Tear the kale into bite size pieces, toss in olive oil, season with sea salt and cracked pepper. Place on a baking sheet and bake in the oven until light golden brown and crispy. 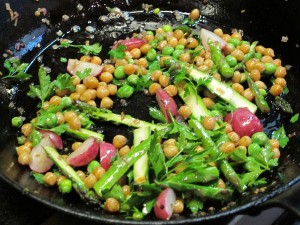 Try finishing the vegetables with a little flat-leaf parsley

In a medium-sized fry pan, sauté the shallots, chick peas, diced asparagus and radishes together for a few minutes, until tender but with no extra colour. 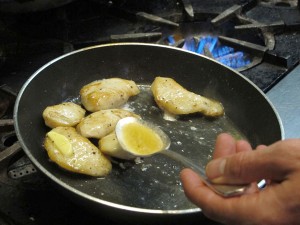 For the Halibut Cheeks:

Season the halibut cheeks with sea salt and cracked pepper.

In a pan over high heat, sauté the cheeks in olive oil for 1 minute per side.

*Chef Bell gives the cheeks a little napping (spooning the oil over the fish) while they rest in the pan for a few seconds.

Place the veggies on a plate or platter, lay the cheeks on top and arrange the kale chips around.

Our apologies for an omission in this recipe in the Dec|Jan issue. In the instructions for making the filling, we neglected to add the milk to the ...
Read More
Spicy Chicken and Shiitake Skewers Rebecca Wellman serves up her delicious take on chicken and mushroom skewers with a tasty side of sauce. Serves 4 ...
Read More
An untraditional take on a classic recipe using local West Coast ingredients, leftover rice, a few kooky twists and just one pan. Hooked yet?   ...
Read More
Spinach and Herb Pesto Makes about 1 cup. 1½ cups finely chopped spinach 1½ cups chopped parsley 2 Tbsp lemon juice, about half a lemon 1 jalapeño ...
Read More
Perogies with Potato and Wild Mushroom, or Two Cheese Filling   This is my recipe for perogies with a fluffy, mashed-potato-infused dough—one ...
Read More
A classic Lyonnaise dish, dating back centuries. Served with a tangy red wine vinegar reduction sauce and tons of fresh herbs. This is my twist on ...
Read More

The article on L’Apéro in the May|June issue should have stated Chef Andrea Maiolo staged at The Courtney Room and Zambri’s and that he held the ...
Read More
May|June issue on the stands. Read ...
Read More
There are still plenty of tickets available for California’s 7th Annual Artisan Cheese Festival  which is taking place in Petaluma California ...
Read More