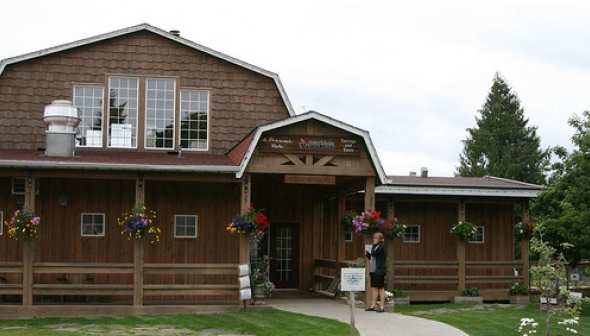 To mark the start of the spring equinox, Merridale Estate Cidery has released a limited quantity cider made from Quince, cider apples, and a mixture of apples coming from the Cowichan Green Community’s FruitSave Project.  Named Project Q, it has been blended with local honey and broad leaf maple syrup to create a cider that is aromatic, slightly sweet, and carbonated.  It is a bunch of “firsts” for Merridale; the first limited release; the first time fermenting their cider apples with other fruit; and the first time to work with the Cowichan Green Community, although it won’t be the last.

In fact, the release marks the beginning of a new trend for Merridale.  They have decided to do 2 limited releases each year, one in the spring and one in the fall to celebrate the blossom and the harvest.  “Each equinox there will be a special release cider created with a community partner that shares our values”, said Janet Docherty co-owner at Merridale.  “It will give us the opportunity to create value added for both parties, and allow us to give back to the communities that have been so generous to us”.  It is also an opportunity to be creative and daring, because each of the ciders will be small releases, they can be truly unique and expressive.

The first collaboration is with the Cowichan Green Community (CGC) FruitSave Project. The CGC focuses on food security in the Cowichan Region by developing strong relationships with local food producers and by increasing urban and rural food production.  In particular, the FruitSave is a local program that organizes volunteers to harvest backyard fruit that would otherwise go to waste. This mandate is so similar to Merridale’s that the two have formed a partnership.  Merridale will now be the official sponsor of CGC’s  FruitSave Project.  “When you pay for tastings at the bar this spring, proceeds will also go to the FruitSave Project” commented Jess Howard, food and beverage manager at Merridale.  “We have always given a good portion of our tasting fees to charities.  Giving back to our community is something we all feel strongly about here.”

When asked why it is called Project Q, Rick Pipes, co-owner of Merridale said, “The Quince was particularly difficult to work with, so our team began referring to it as the project.  Just about everyone was involved in the process from the cooks, to the cider makers, to the distiller and finally to the taster. It seemed fitting to just leave the name as “Project Q”.

And why Quince apples?  Cider apples are very old and so is Quince. Quince, however, are likely the oldest “apples” in the world.  Many claim it to be the forbidden fruit in the Garden of Eden, and it is strongly associated with the goddess of love, Aphrodite.  The ancient characteristics of the fruit just seemed to match the cider apple.

The cider was released for the first time on March 16th  ~ St. Paddy’s Dinner and Dance at Merridale.  The release was given a fine kick off featuring a 3 course meal for $30 with live music by the Sugar Beetles to get toes tapping.  Look for the Project Q  in your favourite liquor store.

July|August issue on the stands. Read ...
Read More
This summer, both Vancouver Island’s Muse Winery  and the Okanagan & Langley based Township 7 celebrated their second seasons of live ...
Read More