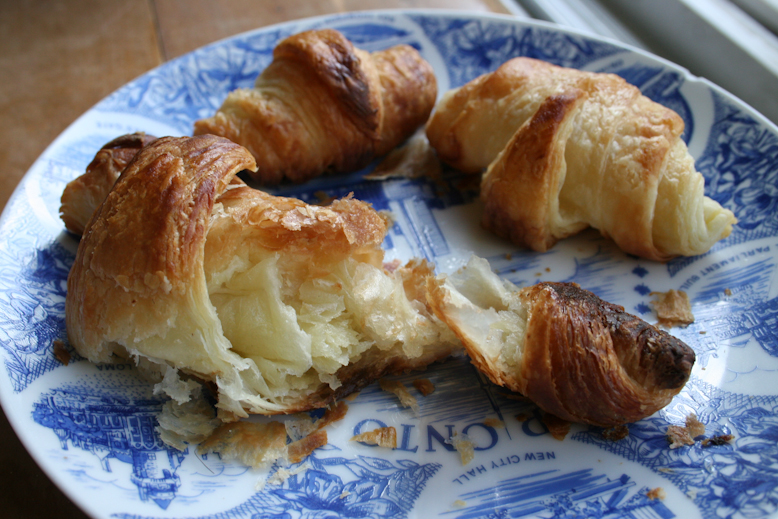 I spent a few weeks in Cannes once, living in an apartment over a croissant shop. In the evening I would go down and put in order for the next day and then in the morning ride down the tiny elevator and pick them up, fresh for my breakfast. I don’t believe the lady who ran the bakery ever bothered to learn my name, or the name of my companion. We were always referred to on the order sheet as “les Anglais”. This casual dismissal aside, the croissants made at that shop were exceptional. I don’t know that I can quite replicate that level of quality, but I have managed to produce a result that is pretty good. I present it to you here.

A couple of words of warning in advance, though. First, This is a very involved recipe that takes time to make. The only reason to try it is if you are feeling particularly adventurous in your baking. It would be much easier to go and buy a nice croissant from one of the many fine bakeries in town. However, if you do try this, you will end up with a product that is better than any of the croissant shops in town (at the very least because you made it yourself and there is a sense of elation when anything this involved comes out of the oven looking proper). Next, if you are going to do this, be aware that it is a rich recipe that involves a lot of butter. There is no substitute for butter that will make this recipe work. I will not even discuss such possibilities.

Ingredients (to make around 24 croissants).

Step One: the starter.

Place the dry yeast, one tbsp. of sugar, and a pinch of salt in a cup, with just under half a cup of above lukewarm water. The sugar and salt activate the yeast. This takes 5-10 minutes. You will know it is ready when the mixture begins to froth at the top. 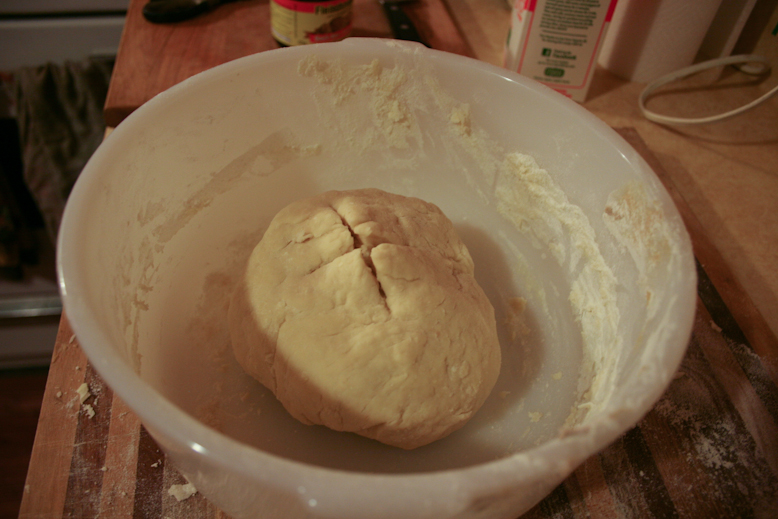 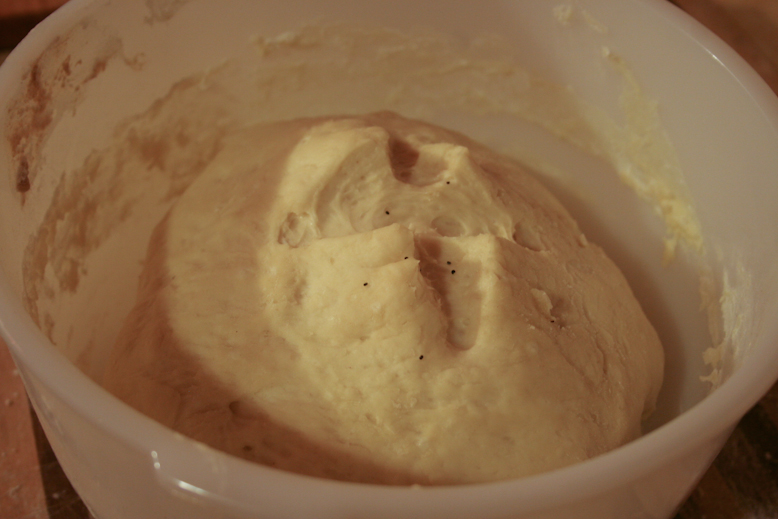 Before and after dough rising

Meanwhile, pour all your flour, salt, sugar, and oil into a bowl. Then add a cup of milk that has been warmed on the stove, and the yeast mix, and then stir them all together until you have a sticky dough. Kneed this dough on a board, as one would bread dough (which is essentially what it is at this point) for about 8-10 minutes…until it springs back to the touch. Then place the dough in a slightly oiled bowl, snip an X in the top with scissors to help it rise, and set it aside for an hour and a half. Choose a warm place to leave the dough, and cover it with plastic to help the rise. It should be double in size when it is ready. Take it out and roll it into a large flat disk shape about a quarter of an inch thick. 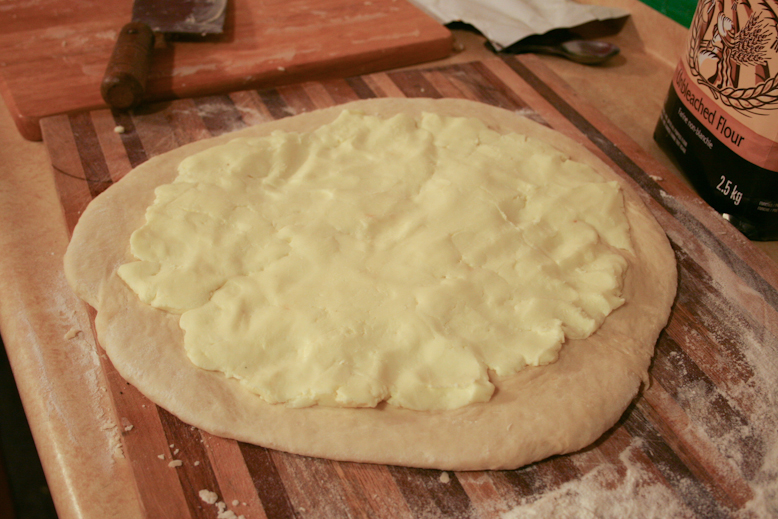 If you want the most flavour, try using the homemade cultured butter I wrote about (Making Better Butter). The secret to a good croissant is that there is a slab of butter folded into the dough, that then permeates the layers. A lot of people, professional bakers, like to use an absolutely square and flat slab. I went with a bit more of a laissez-faire sort of arrangement, but the end result was the same. The important thing is that the butter must remain as cold as possible. Take the pound of butter out of the fridge and then beat it and squish it with the rolling pin, and then with your palms, until you have a smooth and lump free paste. Shape this into a disk, too, and place it over top of the dough disk. See photo. 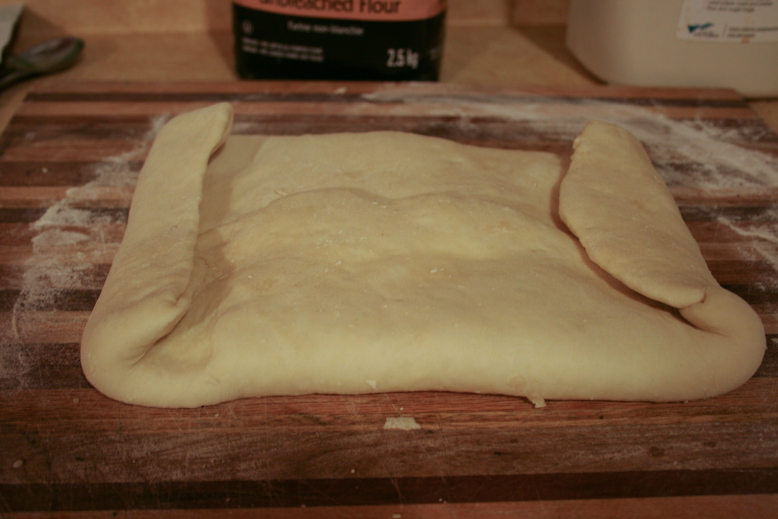 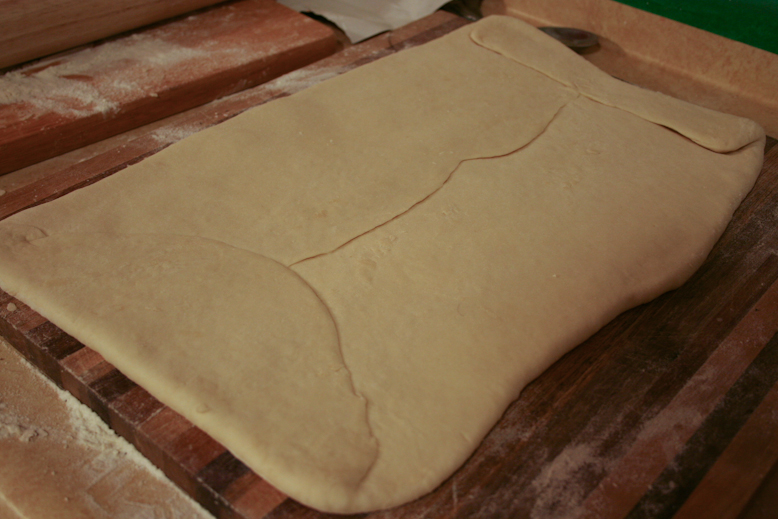 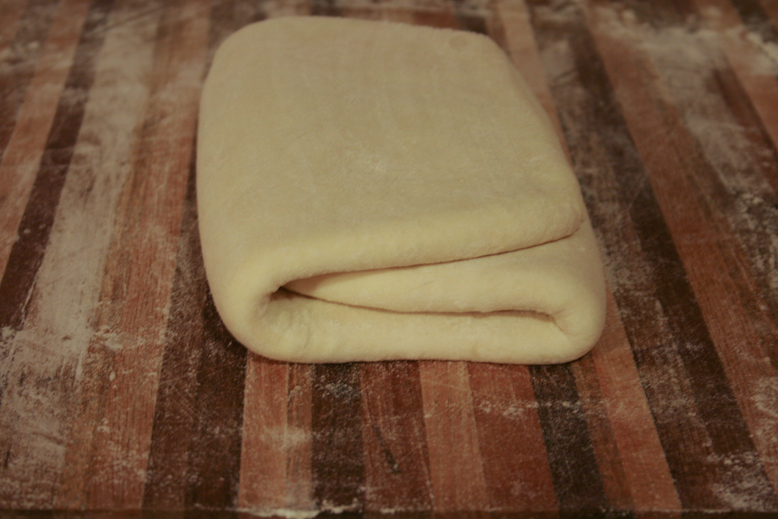 Now comes tricky part. The dough needs to be folded up over the butter so that the butter is completely enclosed within an envelope of dough. I provided a photo of this, also. Then, the dough envelope needs to be carefully rolled out (so no butter escapes through any opening) into a large rectangle. For this amount of dough, something 18 inches by 10 inches might be appropriate. After this you have to begin the turning process that will build up layers inside the croissants.   Take the large rectangle and fold it in three, so that each side has covered over the middle (see photo). When this is done, roll out the dough in the opposite direction and perform the same fold. These folds are called your first and second turns. You must now wrap the dough up in cellophane and leave it in the fridge for two hours. This helps the gluten to relax and the butter to chill again. After two hours repeat the same process by making two more turns, then chilling again for two hours.

After all the hours of waiting, remove the dough. Divide it and put half back in plastic in the fridge. Roll the other half out into a large rectangle again, but this time make it ¼ inch thick. Use a knife to cut a series of isosceles triangles in the dough and then gently (so as not to crush the layers inside) roll from the wide end to the pointy end, making a small crescent. Place the crescents on a lightly greased sheet. Note that because a lot of butter will come out, a sheet with raised sides is going to be much better for this task. You can now do your second batch and place them on a sheet, too.   Let the crescents proof for at least two hours (this is to say let them sit someplace warm and don’t touch them), then preheat the oven to 350. Before you put the rolls in the oven, wash them with a glaze made from egg white and a tbsp. of water. This will give the top a brown colour. Then bake. I have mine in for about 15 minutes. Keep you eye on them, because the line between ready and overdone is very fine.  Conclusion:

A good croissant should be crisp and very flaky on the outside and have fine coiled layers of buttery flesh on the inside. There is often a impulse to decorate a croissant with powdered sugar or even all sorts of icing. I would avoid this at all costs. The joy of this pastry is in the textured fusion of the butter and the dough alone. Any kind of sweetening seems like a frivolous indulgence to me. I do admit that the pain au chocolate, the croissant with chocolate baked inside can be sublime, but this is a distinction for another day.

Superflux Cabana has opened upstairs at 804 Broughton St (the former location of The Livet). Featuring lots of Superflux beer and a menu that ...
Read More
January|February issue is on the stands! Pick up a copy, or read the digital version. Read ...
Read More
It’s a crisp January morning. Stewart Orr wears a pressed white shirt, sleeves neatly rolled past his elbows, a plaid tie and a striped apron. A ...
Read More