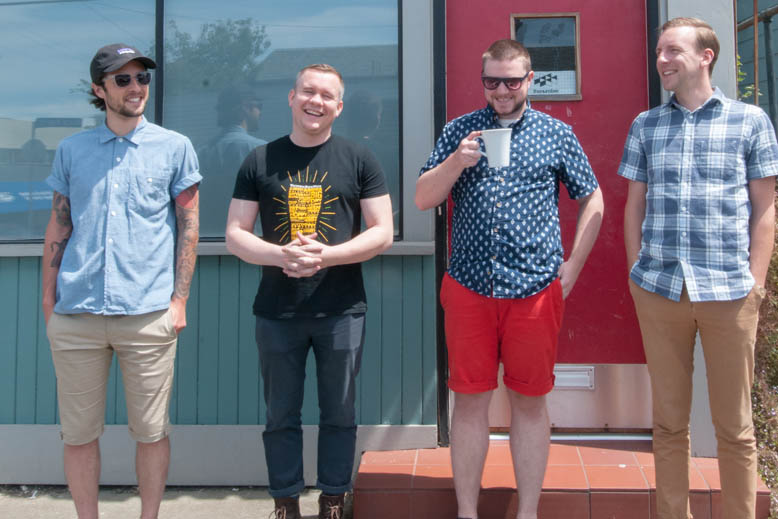 We’re sitting in the Public Market at the Hudson with sandwiches from Ravenstone Farms. Mid-sandwich, Kevin Ehman tells me why they chose the Market for our meeting: “The idea of the Public Market and what it represents in the evolution of our downtown core is important,” he tells me, “and it echoes the things we believe in at thenumber. Our mandate is to engage in long-term relationships with businesses who share the same values as us—we are always looking to partner up with people who are passionate about Victoria as a place.”

That commitment to long-term relationships isn’t specific to thenumber’s mandate. What becomes clear when sitting down with close to half of thenumber’s team—the company is composed of just over ten people, despite being close to ten years in—is that this is a group of, well, friends. “Every hire we’ve made has not been someone I didn’t know beforehand,” Scott Milligan describes. Kevin chimes in: “Aaron and I went to Chris’s wedding way before thenumber was even a thing.” Scott admits, “I guess that’s a testament to how small Victoria is.” Maybe, but to me it seems more indicative of how successful tech startups happen in Victoria; like-minded friends decide to come together and make interesting things happen. And, as thenumber’s resume shows, this model works. A self-professed team of creators, organizers, and makers, thenumber has secured a range of significant website, video, and media relationships including 2% Jazz, Rifflandia, the Royal BC Museum, the Garrick’s Head Pub, and local pro cyclist Gillian Carleton. 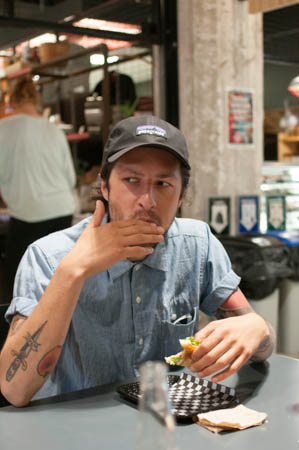 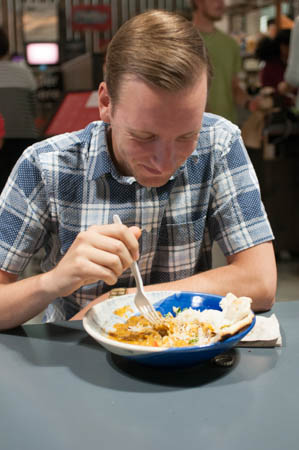 On the left is Kevin pondering the merits of having a second BLT from Ravenstone Artisan Meats, while Scott Milligan (right) has his lunch from Sutra

I touched base with Scott Milligan (Web Lead), Chris Long (Project Manager/Operations), Kevin Ehman (Project Manager/Strategist), and Aaron Bergunder (Creative Director) to talk food, Victoria, beer, and which member of thenumber team will be the future mayor of Victoria.

“Can we turn this article into how Kevin is going to be mayor one day?” Chris Long requests. “Scott would probably win. He doesn’t have the sordid past I do,” Kevin responds. “Scott’s most likely to get votes,” Aaron muses, “but least likely to run.” Scott stoically nods. Whether or not local politics are a serious consideration for any of these fellas—I don’t think they are—it might as well be; thenumber is clearly devoted to the diversification and cultural development of Victoria. One of my first questions for this group regards the “why” of Victoria—why situate and sustain a marketing and creative agency in Victoria? We’re on an island after all, and are kind of geographically peripheral.

Chris is quick to respond: “There seems to be a really high aptitude for tech here… we’re a city of students, and that’s a great thing—we have education coursing through the veins of the city. Because of that, I think there’s an appetite for tech here—people want cool looking apps, web interfaces, and awesome devices here.”

In the spirit of having a good ol’ food jam with some well-known local fellas-about-town, I asked thenumber’s crew a few quick questions about personal favorite places to eat, drink, and exist in Victoria.

Kevin: “Times have been had the Brickyard,” Kevin tells me, as he proceeds to vacantly stare into the void while a matrix of past Brickyard experiences unfold before his eyes.

Chris: “I’ve been to the dynamic duo of the Pita Pit/The Joint too many times to count. No longer, however—I’ve learned how to resist it.”

Scott: “I often go home and make these awful Sauerkraut omelets, or I’m all about the Branston pickle on a Friday night—Triscuit, cheddar cheese, and a big blob of Branston pickle.”

Aaron: “Probably Brickyard. I think I lived there for two or three years.”

thenumber, in many ways, signals the ongoing reconfiguration and reformation of the Rock Bay area. When asked about which places thenumber team frequents on a day-to-day basis, Rock Bay businesses repeatedly pop-up. “Wheelie’s has been great for us—it resonates with this whole idea of Rock Bay growing, gentrifying, and changing. It has a simple menu with great coffee,” Chris tells me. “La Taquisa is the second most popular group lunch,” Scott adds. “It’s the most effective way to fill your stomach in Victoria.” Having once worked in the Rock Bay area, I’m inclined to agree (bonus: we all agree that the owner, Scott Demner, is the nicest guy in the world).

As with any business worth talking about ever, beer is taken seriously at thenumber. “We are a huge beer drinking office,” Kevin says seriously. The table then excitedly explodes into a conversation about favorite beers—Scott prefers Phillips Bottlerocket or “anything made by monks”, Kevin craves Spinnakers’ Kolsch in the summer, Aaron drinks a “helluvalotta” Steamwhistle, and Chris has most recently been into the Four Winds brewery out of Delta. “At the end of the day,” Chris concludes, “the variety of [beer] is so huge now, we’re really living in this blessed time for beer.” Their beer fridge, Chris is careful to inform me, is currently empty. “I drank it all,” he chuckles with satisfaction.

While everyone admits to rarely packing lunches—it’s an excuse, Chris suggests, to get out of the office and into community spaces like the Public Market—everyone claims to be pretty active in the kitchen. Chris recently prepared a killer mushroom sauce gnocchi, Scott boasts about his recently purchased muddler, Kevin is working on dialing down his fried rice game, and Aaron claims to cook at home 70% of the time, having recently steamed some fresh sesame ginger chard from his garden.

Kevin: The Tartan Toque—it’s across the street from my house. I sort of slid into being a regular there.

Scott: I-Kyu Noodle. They have the best Kimchi in Victoria. A tablespoon and you’ll be riding the kimchi high.

Kevin: My first and likely only visit to Red Fish Blue Fish this year. The tuna tacones are consistently, unbelievably delicious.

Aaron: I had brunch at Logan’s Pub this weekend. Logan’s literally never has a lineup or wait, they have a patio—I always wonder, “why isn’t everyone here?”

The article on L’Apéro in the May|June issue should have stated Chef Andrea Maiolo staged at The Courtney Room and Zambri’s and that he held the ...
Read More
May|June issue on the stands. Read ...
Read More
I have a love/hate relationship with Cabernet Franc. When the grape is treated gently – letting the spicy, herbal, bright fruit shine – I love. ...
Read More