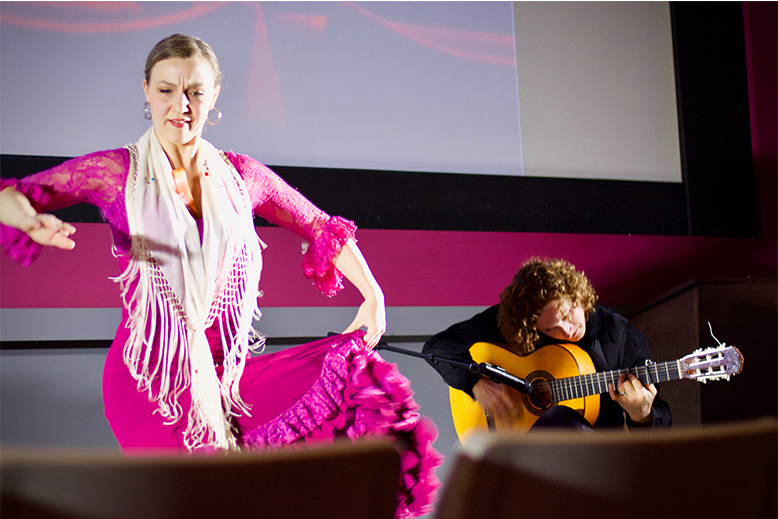 Everyone loves popcorn and junky food before a movie, but arguably­—or absolutely—better are hand-selected local bites and drinks. Patrons to the Vic Theatre enjoyed just that last weekend as The Victoria Film Festival wrapped up its fifth annual Feast: Food and Film Festival. The events concluded at the Phillips Backyard on June 17 with the musings of the 1984 classic, This is Spinal Tap accompanying Phillips beer and snacks of melted drummer goo.

A little more low-key than Spinal Tap was Deconstructing Dani Garcia in the afternoon of the 17th. The documentary follows Dani García, a Spanish Michelin star chef who in January of 2014 reaches a breaking point in his career. When García‘s restaurant closes due to financial issues, he is forced to adapt. The audience follows García’s progress over a few short months as he struggles to open his own restaurant complete with new staff, interior, and concept. Along the way, García raises doubts about his choices as he laments the time spent away from his wife and daughters. His journey, however, seems justified in the end as his concept flourishes, he discovers techniques new to his craft, and his restaurant takes off in resounding success.

Keeping with Spanish theme of the night, snacks were provided by Chorizo and Co and their infamous tortilla Española, as well as a small selection of olive oils and bread from Olive the Senses including an arbequina and a picual variety. The arbequina had a nutty creaminess to it, like almonds or artichoke, where the picual had more of a black pepper kick. The tortilla was amazing, tender, and flavorful as it always is from Chorizo and Co. The snacks came with sherry parings from Vessel Liquor. First was an oloroso sherry that had with a sweet smell, despite it’s dry quality, followed by a chilled fino sherry that had a savory, almost salty, character to it that paired will with the olives and tortilla.

To truly round out the theme of the evening, Gareth Owe—on guitar—and Denise Yeo—dancing—of Alma de España Flamenco Dance Company made for a passionate performance on stage before the film. Between Vessel Liquor discussing which bodegas the sherry comes from, Olive the Senses describing the proper brining technique of olives, and the ardent stomping of the flamenco dancer, the evening really was a mini transportation to Spain, and for a much cheaper price tag.

Superflux Cabana has opened upstairs at 804 Broughton St (the former location of The Livet). Featuring lots of Superflux beer and a menu that ...
Read More
January|February issue is on the stands! Pick up a copy, or read the digital version. Read ...
Read More
“They see me rollin’, they hatin’…” The sink roiled as I aimed the sprayer at the mushy residue at the bottom of another twelve-quart soup ...
Read More