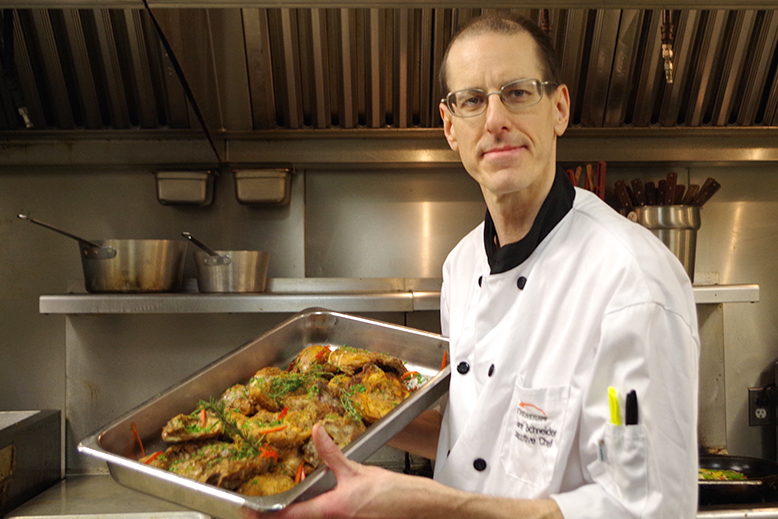 Everyone knows stadium food: hot dogs, popcorn, and beer, right? But what about prime rib, lobster ravioli, or crème brûlée? You might be as surprised as I was to discover those items on the exceptionally good Lion’s Den buffet, just before a recent Royal’s game. I sat down to chat with the chef responsible, and get an inside look at how the stadium’s food services work.

Executive Chef Duane Schneider oversees the eats for everyone who passes through the gates; from hockey fans to concertgoers, from sports press to backstage crews, and acts from Stars on Ice to Bill Clinton. While some of the visitors bring their own chef and rent out the arena kitchen, for the most part, it’s Schneider and his team that provide the meals, snacks, and group’s rider (contract) requirements.

Schneider, an Islander, was Executive Chef at Vancouver’s Rogers Centre when the Memorial Centre opened, and had come over as part of a set up team for the new facility; shortly after, the Executive Chef position opened and he quickly seized the opportunity to come home. 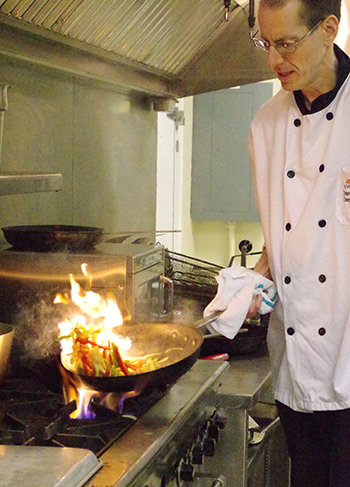 “Everything was shiny and new” he says “and what chef doesn’t want that?” But along with the shiny and new came what he calls his biggest challenge – the physical layout of the building. The surprisingly small main kitchen is on the second floor, the Lion’s Den on the third, so everything has to come via elevator, or up several flights of stairs. (Ground floor concession stands each have their own fast food style line for food preparation.) This distance means Schneider has to be strategic in his menu planning, as foods have to hold well in chafing dishes both on the buffet and for the trip from the kitchen. “We bake and roast a lot” he explains, “and food is fired (finished cooking) immediately before service”. Buffet dishes are replenished with fresh food quickly and often by runners.

In addition to the restaurant, the private suites and season ticket holders’ lounge are serviced through the main kitchen.

Most of the food is made in house, from scratch. Even with limited space for pastry and baked goods, Schneider manages to serve bread pudding, berry crisps, and individual tiramisus, with just a few prefab squares.

As for the menu, “For the games, it’s more of a meat and potatoes crowd” he says. The menu is on a ten game rotation, to keep the regulars from getting bored; every Friday night sees prime rib as the carvery item.

On concert nights, depending on the act, Schneider tends to be more adventurous, a little more upscale. You might find fruit and cheese plates available, or fancier canapés, and this is driven by what is being served backstage. “It just doesn’t make sense to make a menu for backstage and then something different for the restaurant.”

But not all of his attention is on the restaurant. “We’ve tried other things for the concession stands,” he says, citing sushi and lobby carveries. “Some things work, some don’t, but we keep trying”.

From where up to 7,000 fans sit, I’m sure they’d agree Schneider and his team are succeeding.

For more information on the Lion’s Den visit their website.

July|August issue on the stands. Read ...
Read More
In wine country, the mystery isn’t how a genie gets into a bottle – it’s how small wineries get the wine into the bottle without breaking the ...
Read More