As the launch evening for the Parksville Uncorked Wine & Food Festival (Feb 23-26), it is difficult to conceive how the event’s beer component, Parksville Untapped, could have been more celebratory. Hosted in the lobby area and ballroom of the luxurious Beach Club Resort, this year’s Untapped bore a western theme, meaning guests were drawn immediately into the heady hoedown atmosphere when greeted by Stetsoned valet parkers and hay bales flanking the entrance. Yee, and indeed, haw!

Inside, the party vibe was (loudly) amplified by a rocking covers band (which, curiously, played just one country song), as cowboys, cowgirls and the less thematically-attired toured the circuit of exhibitors with considerable enthusiasm for their products. An impressive assembly of fifteen Vancouver Island and Lower Mainland breweries, two brew pubs, two cideries, and even a meadery showcased a cross-section of the very best brews BC has to offer. 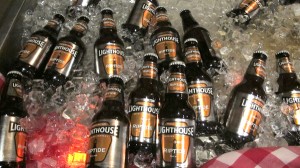 For the casual tippler and the hardcore beer snob, there were ales, lagers, stouts and more to surely satisfy every taste. As a self-proclaimed member of the latter fraternity I was already familiar with many of the beers available, so more than content to accept samples of established favourites in my souvenir tasting glass, included in the bargain $49 ticket price. But the joy of an event of this nature for the likes of me is the thrill of discovery, and at Untapped I was not disappointed. Three somehow previously elusive beers stole my heart and a worrying percentage of future salaries; Driftwood Brewing Company’s hop-tastic Fat Tug IPA, and Canoe Brew Pub’s super-smooth Siren’s Song Pale Ale were delicious, but my gold rosette went to Cannery Brewing of Penticton’s extraordinary Maple Stout. A seasonal limited edition and winter classic, seek it out at all costs – that beer can be a sensory experience.

There was more to this superbly organized celebration of BC brews than the star attractions, however. Food also played a heavily supportive role in the proceedings. As one should expect at such a bash, many of the comestibles served by the local restaurants and food purveyors in attendance included beer as an ingredient. Others dishes simply were paired to go well with it. Kielbasa slider dogs with cranberry mustard; mushroom risotto balls with marinara sauce, and a gushing chocolate fountain may not be your typical pub fare, but all were certainly appreciated by this particular guest.

This was just the 2nd Annual Parksville Untapped, but the level of hospitality, professionalism and gusto with which it was presented lent it an authoritative, veteran presence that greatly impressed this first-timer and, for sure, a great many of the hundreds of my fellow attendees. If viewed only as a mid-Island social event par excellence, 2013’s Parksville Untapped cannot come soon enough!

With Phase 2 beginning, restaurants and patios, tasting rooms and coffee shops are reopening. This is an ongoing process, with many changes, so we ...
Read More
An old Tofino classic is going to be new again. The Maquinna Pub, part of the Maquinna Hotel building at Main and First Sts., is set to reopen soon ...
Read More