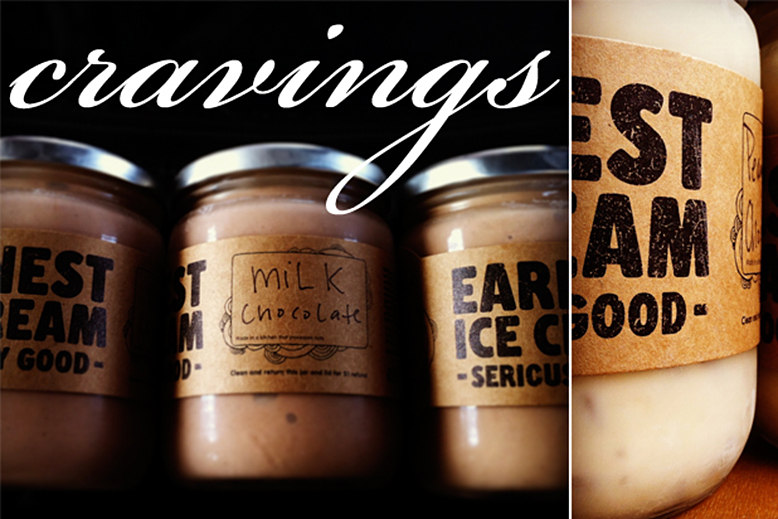 A day without ice cream is a day wasted. At least that is how entrepreneurs Ben Earnst and Erica Bernardi of Vancouver’s Earnest Ice Cream feel. And lucky for them, they never waste a day.

The pair has spent their inaugural business year creating countless delectable flavours of small batch, gourmet ice cream and are gearing up to open a scoop shop and production/retail space at Fraser and 24th Avenue in July. When asked what excites them most about having their own shop, Earnst and Bernardi agree that they are looking forward to interacting with their customers on a daily basis. “It’s that face to face we’re lacking”, Bernardi said.

Keeping their business intimate has been their goal from the get go. The duo does it all themselves, from marketing and distributing to restaurants around the city, to selling at the farmers’ market, they don’t see the need for a middle man. “It’s pretty grassroots,” Earnst said. “It just makes sense that we do everything ourselves.” Their ice cream, which is sold in reusable glass jars, has been flying out of freezers in specialty food stores and selling out at the farmers’ market even in the middle of winter.

The city is buzzing with talk of Earnest’s top sellers like Salted Caramel and Whiskey Hazelnut, though the product’s popularity extends well beyond its addictive flavours. Unlike most of the ice cream that is available in stores, Earnest ice cream is made with whole food ingredients, including locally sourced milk, cream and eggs. Their flavours change with the season and they’ve even teamed up with a local forager to produce unique flavours like Elderflower, Juniper Berry and Sprucebud, a personal favourite of Earnst’s. “You imagine it’s going to taste like the forest but it isn’t like that at all,” Ben said of the Sprucebud ice cream, likening its flavour to a handful of tropical Skittles. The duo is currently working on an olive oil flavour, one that will soon join the ranks of other daring flavours like Cardamom Chai and Kaffir Lime. This summer’s seasonal line-up will feature a full spectrum of B.C. berries and stone fruit from the Okanagan.

Although the opening of their shop is a big step in the expansion of business, Earnst and Bernardi don’t have the desire to extend beyond city limits. “We don’t have ambitions to grow beyond being Vancouver’s ice cream,” Earnst said. They are, however, planning on taking their ice cream to the streets of Vancouver this summer with an Earnest Ice Cream food truck.

When the sun’s out and gorgeously beating down on a weekend mid-May, people in Victoria require an exceptional reason to stay inside for a few ...
Read More
“The original Cowichan Bay Bakery and its Okanagan sister location celebrate a decade of baking made from freshly milled, local, organic ...
Read More
Vinegar is one of the world’s most widely used condiments—every culture around the world utilizes the pantry staple. The Italians love their ...
Read More
A little bit of blue cheese goes a long way. That’s the literal truth about Blossom’s Blue, an exceptional blue cheese made by Moonstruck Organic ...
Read More
Eat is happy to announce we will be featuring one “Cheese of the month” article each month online. Expand your cheese tastes! ...
Read More
If you’ve heard the term “farm-to-table”, it’s likely you have an idea what it means. There’s something to do with sunny days, farmers’ ...
Read More

The article on L’Apéro in the May|June issue should have stated Chef Andrea Maiolo staged at The Courtney Room and Zambri’s and that he held the ...
Read More
May|June issue on the stands. Read ...
Read More
We just got a note from Spinnakers about the big cask night they are having on the 31st (of October of course). Claire Radosevic (GM of Spinnakers) ...
Read More