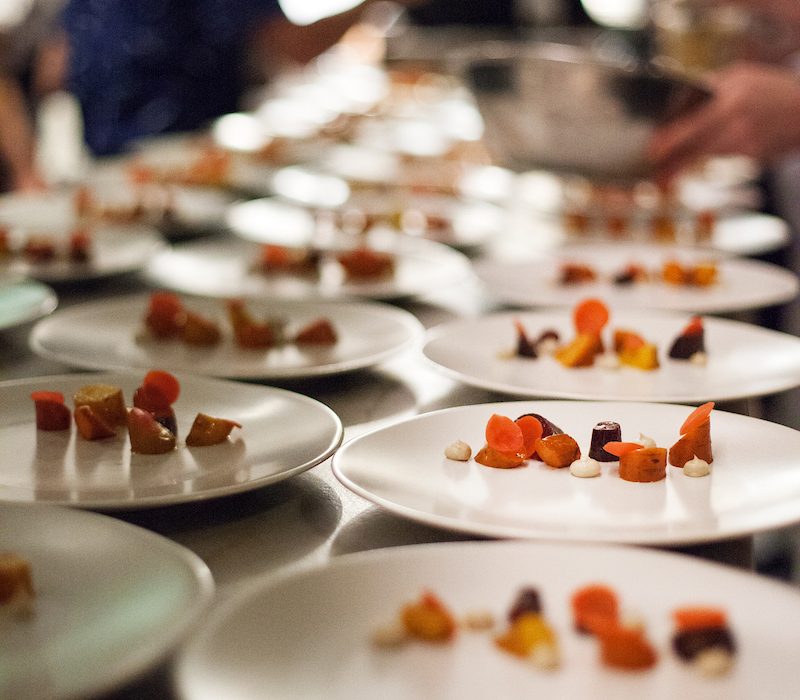 Victoria’s food community came together this week at Boom + Batten restaurant for Eat the Future, a tasty event to raise money for future chefs and shine a light on the issue of food sustainability.

Little ferries danced a watery ballet in the inner harbour as the sun spectacularly set, and diners sipped Blue Grouse bubbly before sitting down to a multi-course meal that pushed the boundaries of creativity. 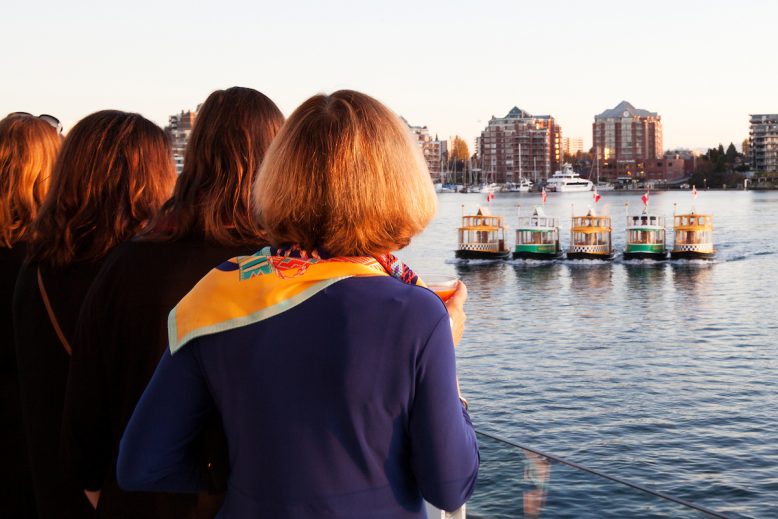 The theme of the evening — “Are we doing enough to tackle our industry’s impact on the environment?” — was interpreted by some of the city’s top chefs, who considered everything from sustainable seafood to reducing food waste and the future of insect proteins in their look into the culinary crystal ball.

“I invited the chefs who really inspire me,” said Boom + Batten executive chef Sam Harris, overseeing the culinary teams from six local restaurants. “I’m a sci-fi nerd, and we wanted to look ahead to see what we want food to be.”

“Sustainability is a big part of it, but as long as we’re using our imagination and pushing cuisine forward, it has a lot of value for chefs and diners.”

The $150-a-plate charity dinner and silent auction was organized in support of the Gary Hynes Foundation and the BC Hospitality Foundation, in partnership with EAT magazine, and drew 120 diners to the new waterfront marina restaurant. Organizers hoped to raise more than $20,000 for the two charities to supply scholarships for budding chefs and support hospitality workers facing difficulties.

The eight participating chefs created an innovative menu for an appreciative and raucous crowd, tackling the issue of how our food choices impact the environment, and what might be done to reduce our future carbon “foodprint”. Lively games of chef profile bingo and bidding for auction items punctuated the time between courses, which featured unusual and local ingredients, traditional and modernist techniques.

Chef Harris paired Lois Lake steelhead with crispy rice to illustrate how fish can be sustainably farmed in land-based tanks, while chef Peter Zambri served roasted Cowichan Valley rabbit with wild white chanterelles, pine mushrooms and bitter dandelion greens, showcasing the island’s wild bounty and meats that are sustainably farmed. Tender ribbons of bull kelp fronds were the base for chef Cassels’ dish of oysters and chanterelles with sunchoke puree, another example of how eating wild edibles will shape future dining. Chef Eligh featured Ocean Wise BC seafood with his sablefish cheek and Salt Spring Island mussels in a creamy curry soup, an elevated island mulligatawny.

OLO chef Brad Holmes took farm-to-table into another realm with a quenelle of creamy carrot sorbet alongside his own organic carrots and radicchio, dotted with tahini and sunflower puree, highlighting a future where vegetables take a leading role in our diets.

But the buzz of the night was the entomophagy course from chefs Chris Klassen and Brian Tesolin of The Courtney Room, their handmade cavatelli pasta infused with cricket powder, featuring a sprinkling of the crunchy insects and micro-greens on top.

Tiny greens of another kind were featured in Boom + Batten pastry chef Dominque Laurencelle’s dessert, a pretty open-faced macaron made with island-grown phytoplankton (the next superfood) and topped with creamy mousse flavoured with black tea grown on Westholme Tea Farm near Duncan. 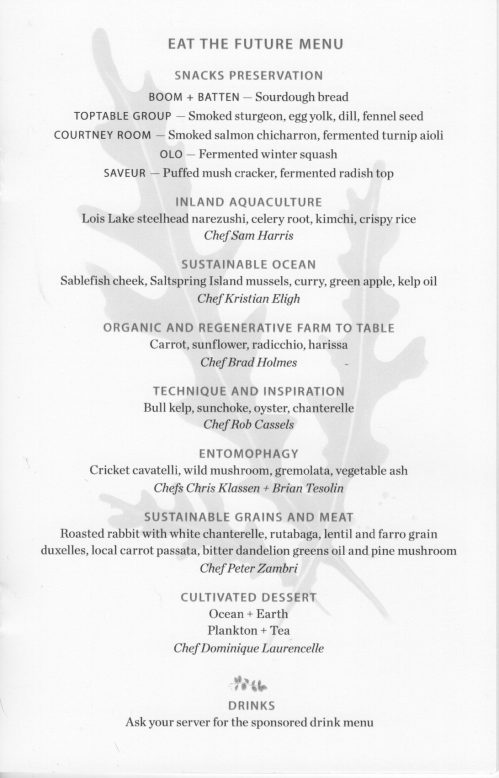 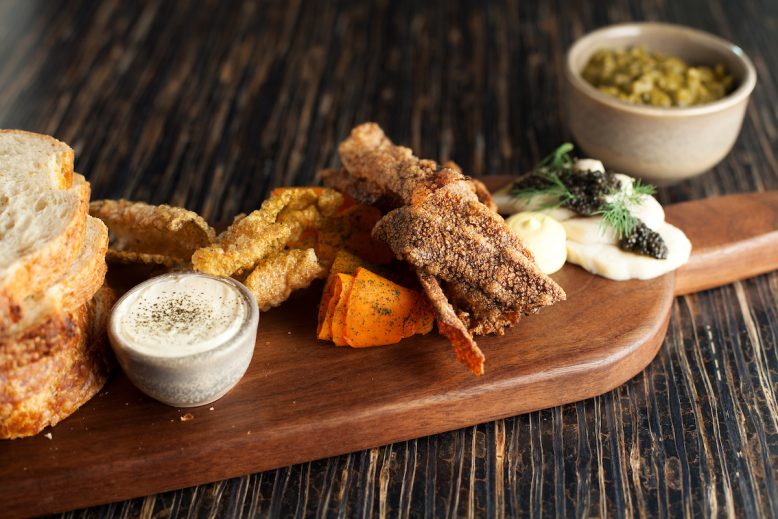 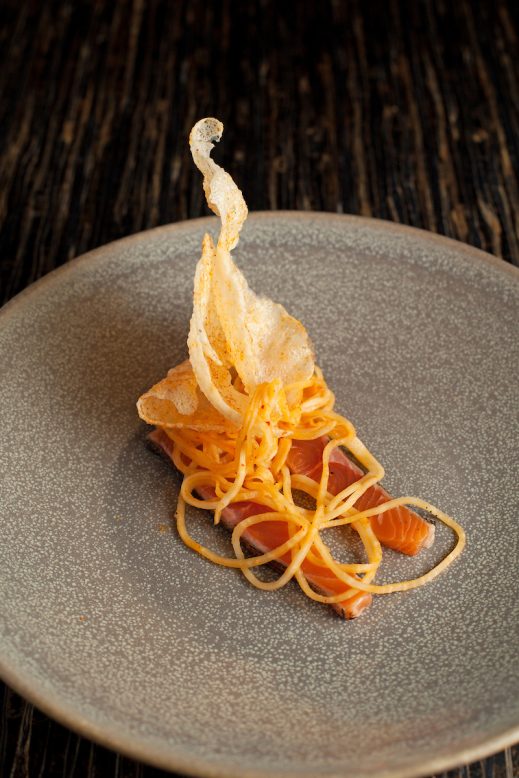 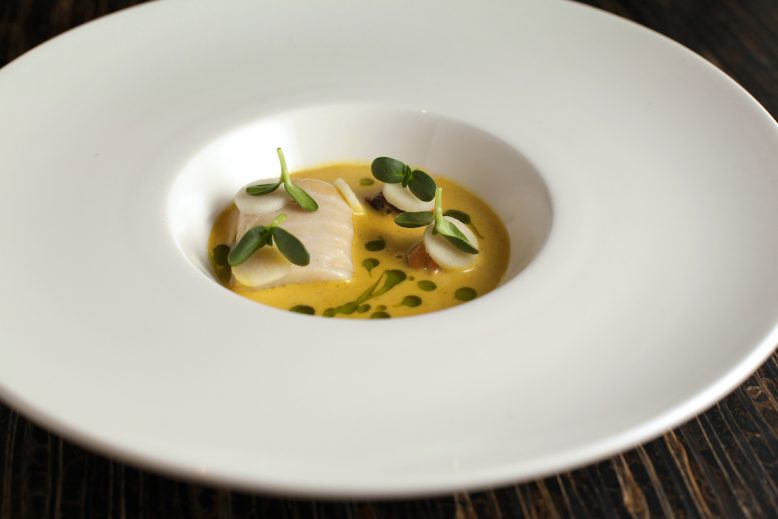 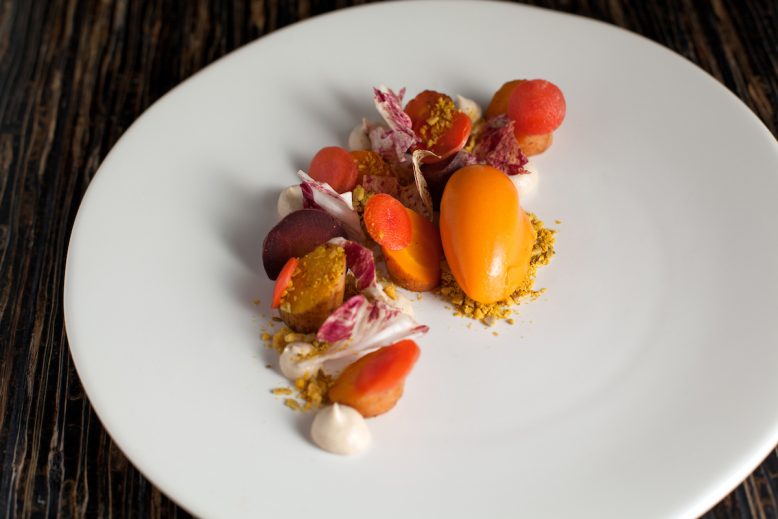 Organic and Regenerative Farm to Table 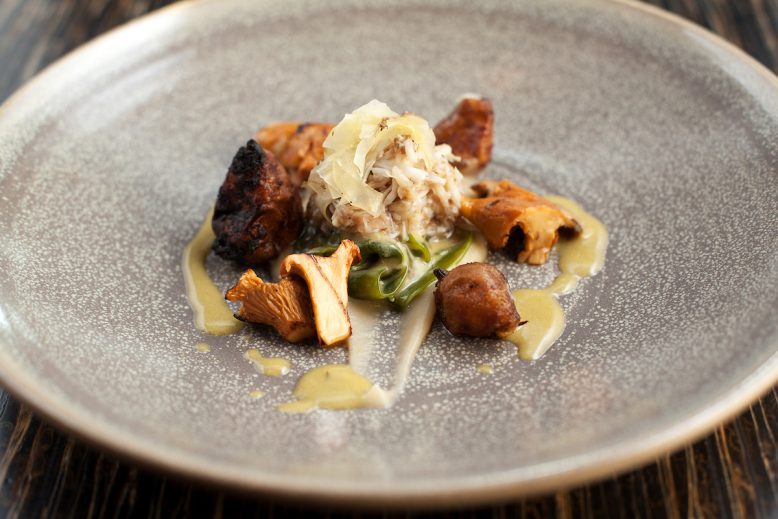 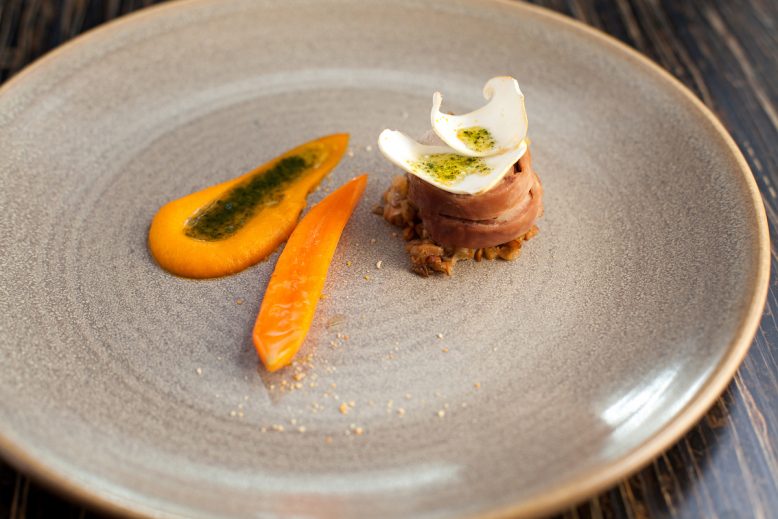 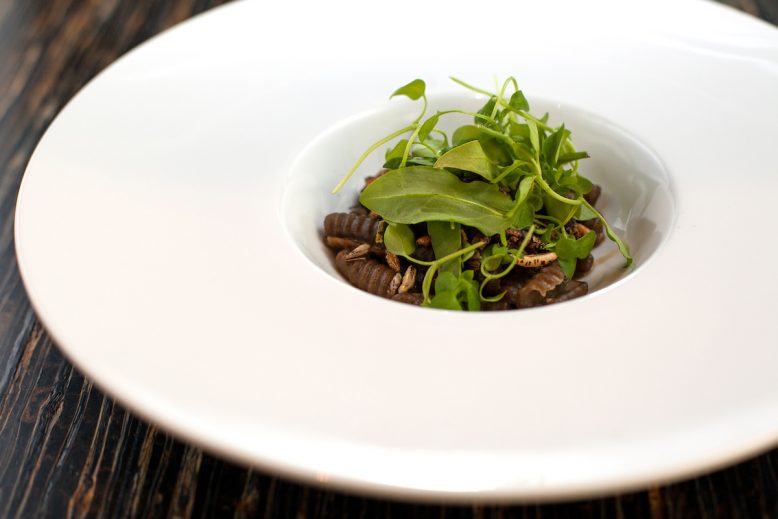 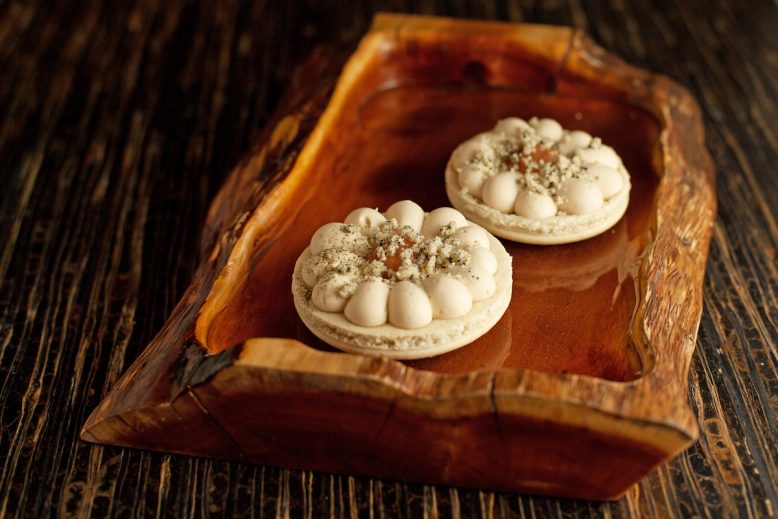 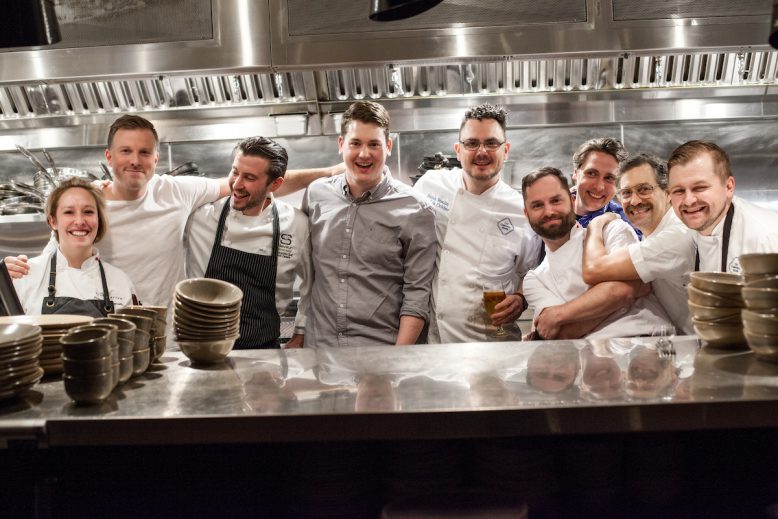 Culinary students ready for the event The team behind Eat the Future

Harris said the chefs joined forces to bring awareness to an important issue facing their industry — how to be the best stewards of future food resources — while supporting foundations that support their profession.

The Gary Hynes Foundation was established in memory of EAT magazine founder Gary Hynes, a writer, photographer, editor and musician with a special interest in mentoring others. The foundation awards an annual scholarship to a student in the culinary, journalism and music fields.

The BC Hospitality Foundation is a charity designed to support those in the hospitality industry who face a financial crisis due to a health issue, whether it’s your local barista, hotel concierge, cook, waiter or winery worker. The BCHF also offers scholarships to students in culinary, sommelier and hospitality programs in BC, and industry scholarships for children of hospitality workers.

Proceeds from Eat the Future will be shared equally between the foundations, specifically for students in the final year of a culinary program.

From a spa staycation at the Oak Bay Beach Hotel, to a whale watching experience with Eagle Wing Tours, a weekend in Vancouver with a stay at the Listel Hotel and dinner at West to Tofino getaways at Wickaninnish or Pacific Sands, there were plenty of delicious diversions to tempt bidders. Especially unique were the portraits of local chefs by artist Mary Ploegsma.

Organizers said they hope to raise more than $20,000 from the event, and were encouraging diners to join them again for the fundraiser in 2020. Eat the Future committee chair Robyn Quinn said participating restaurants and chefs donated their time and ingredients, while all proceeds from the sponsored drink menu went directly to the charities.

With students from Camosun College’s Culinary Arts program on hand to help with production and plating, it was another way for the local food industry to pay it forward to a new generation of chefs, said Boom + Batten owner Paul Simpson, who hosted the event.

“These students are here learning from our city’s finest chefs and meeting their mentors,” he said.

“Eat the Future is about what we can all do to make a difference,” added Cynthia Annett-Hynes, EAT magazine publisher and co-host of the event. “Food sustainability and encouraging the next generation of hospitality professionals is important to EAT Magazine.” 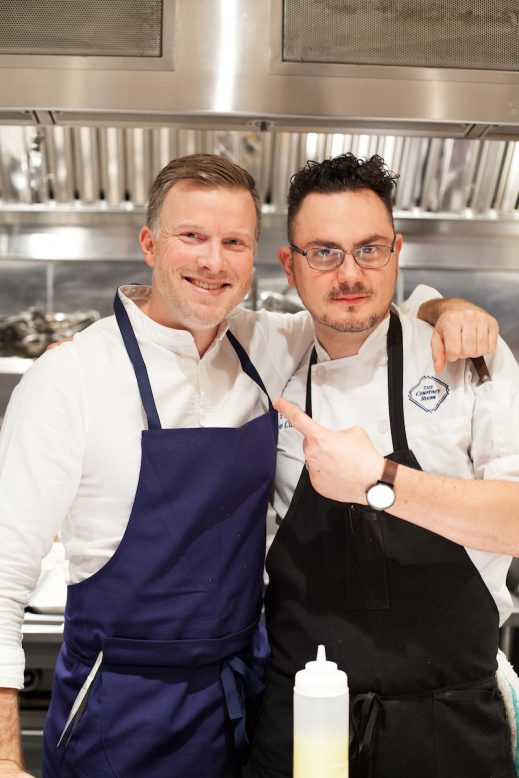 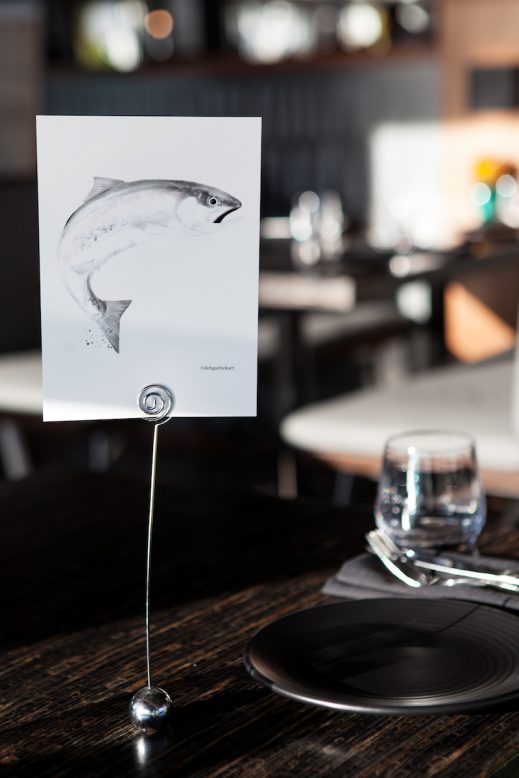 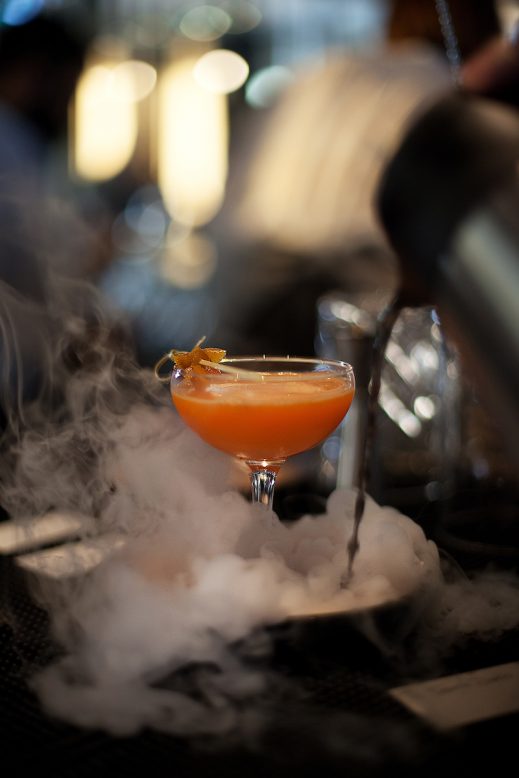 The article on L’Apéro in the May|June issue should have stated Chef Andrea Maiolo staged at The Courtney Room and Zambri’s and that he held the ...
Read More
May|June issue on the stands. Read ...
Read More
Kneading Conference West is a three day event designed to inspire and educate novice and professional bakers, grain growers, millers, wheat breeders, ...
Read More