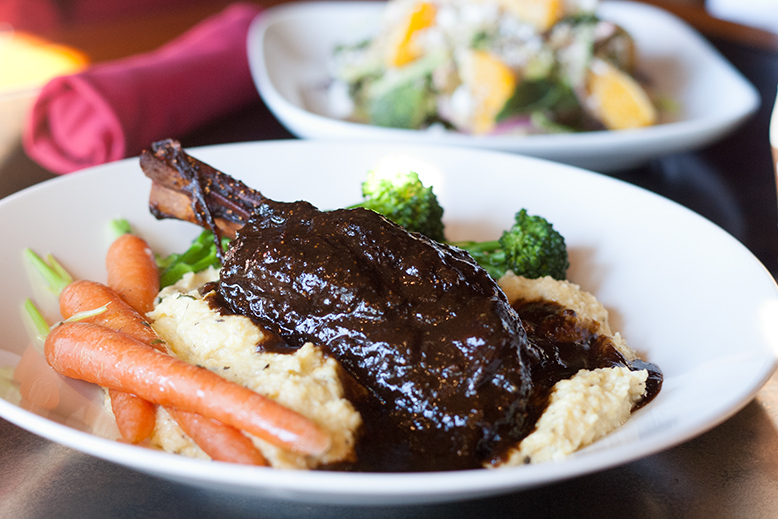 To kick off the fall season, Executive Chef Peter De Bruyn has rolled out a new menu at the Strathcona Hotel. There are plenty of warm, comfort foods to choose from as well as a selection of vegetarian and lighter fare items.

While the menu continues to feature many of the Strath-classics, De Bruyn has brought on dishes inspired by rich, autumn flavours.

The pizzas have been adjusted to suit the season too like The Fall pizza; it has double smoked bacon and fried Brussels sprouts, roasted red peppers onions in a cheese sauce with preserved lemon and ricotta.

On the lunch menu guests can enjoy a personal size pizza with a Caesar salad for $10. Other Lighter Fare menu items include sandwiches, 1/2 salads and the new catfish tacos.

Wanting to keep the popular taco option available (this summer the Rooftop served a Cajun cod seafood taco), De Bruyn has added catfish to the menu. “For one, all our seafood on the menu is certified Ocean Wise and [the catfish] is sustainably raised” says De Bruyn. “We’ve given the tacos a bit of Southern flavour with a cornmeal crust and a chipotle aioli, to keep your mouth singing.” 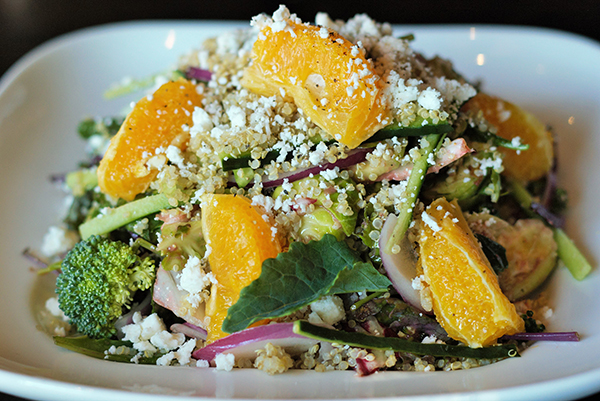 For those in search of healthier, or smaller sized portions consider the Powerhouse salad, which De Bruyn says is “healthy and gluten free with lots of nutrients. It’s a strong, hearty fall salad with nice flavour in a blood orange vinaigrette.” Loaded with fresh kale, broccoli, shaved Brussels sprouts, feta, oranges and quinoa – it certainly is a powerhouse of a salad.

And for those that leave their diet at the door you might nod your head at the Chicken & Waffle sandwich. This fall favourite is “for someone that’s splurging” says De Bruyn. Crispy fried in a cornflake crust, the burger is served with double smoked bacon, smoked apple wood cheddar with a choice of side. Don’t need the side? Minus $3 from your meal. However, if you are interested in a great side dish, try the fried Brussels sprouts! Crispy and delicious with preserved lemon – $4.

Also new to the menu is the Mediterranean Lamb Shank. Peace River raised lamb, marinated in fig, red wine and herbs and slow braised to perfection. “There is so much more meat on this lamb” says De Bruyn. “It’s just a really good product and so we want to make a good dish,” De Bruyn says. Served with herbed polenta and fresh seasonal vegetables for $22. It’s priced right. 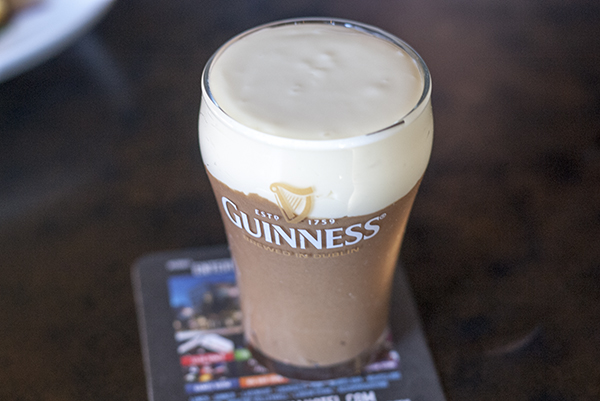 Sous Chef Ryan Kidder has created a delicious Guinness Chocolate mousse that one over the judges during the in-house cook competition. The mousse, served in a mini Guinness glass, looks like the real thing. It’s Guinness infused, rich dark and chocolaty topped with a faux-foam white chocolate whip cream. So tasty!

Creating a menu takes skill and especially in our city where extreme health meets die-hard tradition, gluten free and vegan meets, well, meat-loving folks, De Bruyn is faced with the challenge to offer something for everyone. “We think we’ve reached a good balance on the menu,” says De Bruyn. “We try to focus on dishes you wouldn’t make at home and to challenge cooking procedures. We like to put a little something extra into [our cooking], creating more pride in the food.”

For Game Night fans check out the Appetizer Platter. It serves between 8-10 people and includes 3 pitchers of Budweiser Beer. For $100 it’s a great deal, full of classic appy foods like dry ribs, popcorn shrimp, wings and other goodies.

The article on L’Apéro in the May|June issue should have stated Chef Andrea Maiolo staged at The Courtney Room and Zambri’s and that he held the ...
Read More
May|June issue on the stands. Read ...
Read More
Working in food service is rarely a cakewalk, whether you’re a humble dishwasher or a well-regarded local chef and restaurateur. Coming home after ...
Read More