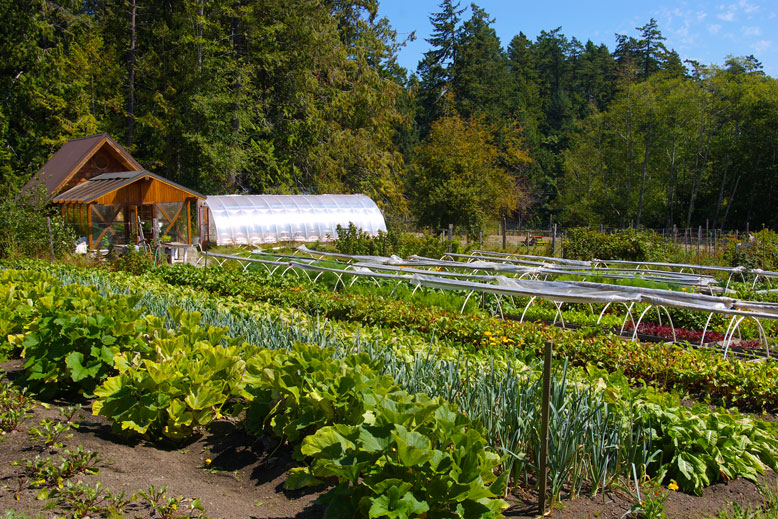 Dining farm-to-fork (or table) is currently one of the biggest trends in the culinary world. The phrase “farm-to-fork” indicates ingredients that have been locally sourced. It’s a growing movement that strongly supports the connection between farmer, distributor, producer, chef and consumer, and the shared vision to minimize transport and emphasize local, seasonal, fresh food.

On Salt Spring Island, within walking distance from the village of Ganges and overlooking the south facing harbor, lies The Harbour House Hotel, Restaurant and Organic Farm. The 15-acre property once belonged to a larger 100-acre farm run by the Crofton family from 1916 to the 1950s. You can read more about the Crofton family and the hotel’s history here.

On a recent visit, I met with farm manager Rob Scheres for a tour of the gardens, located directly behind the hotel. At 78-years old, this Holland born farmer is in tip-top shape. Over the past five years he’s transformed the 2.5-acre gardens into a plot that produces and supplies over 70 varieties of vegetables, fruits, and herbs for the on-site restaurant. The farm raises free-range lamb and chickens for eggs, while also producing honey and Bigleaf maple syrup. Guided farm tours with Scheres are at 11:00am daily, while the gardens are open from 7:00am until dark. The farm stand offers freshly harvested produce, preserves, and baked goods available for purchase. 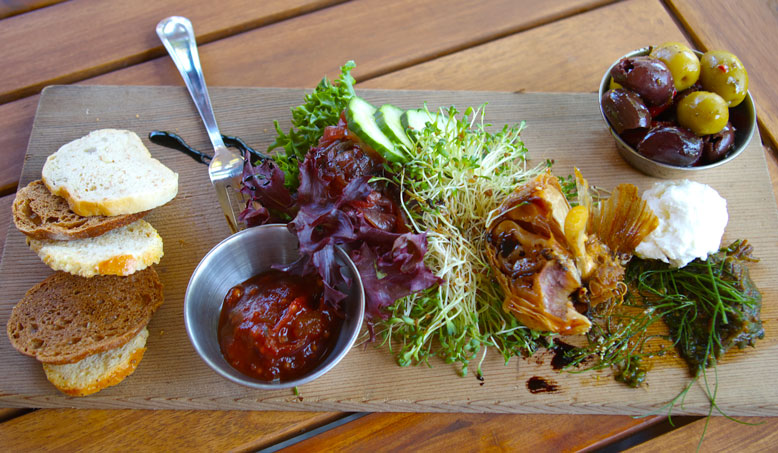 After the Croftons sold their land, the farm lay fallow and unused from the 1950s to 2004 when it was purchased by current owners, Jack and Glenda Woodward. Fortunately, during those fallow years the land was never exposed to pesticides, which bodes well with Scheres — he was farming organically on his grandfather’s farm in Holland long before pesticides were ever on the market.

“Rotation, rotation, rotation” says Scheres. “It’s the only way to do it and to keep the bugs down. Plant peas here one year, and onions the next — [but] never the same thing. ”

Dan Barber, chef of New York’s farm-to-table restaurant Blue Hill and author of The Third Plate: Field Notes for the Future of Food writes: “In Europe […] farmers knew, intuitively, you couldn’t plant the same thing in the same spot, and that you needed to mix your crops, and that certain crops worked beautifully — symbiotically — in rotations” (source).

Scheres and executive chef Brooke Winters work closely together to design a year round garden. What doesn’t get used during the season, Winters preserves says Scheres. “We change the menu according to what we’ve got coming out of the garden at the time” says Scheres. 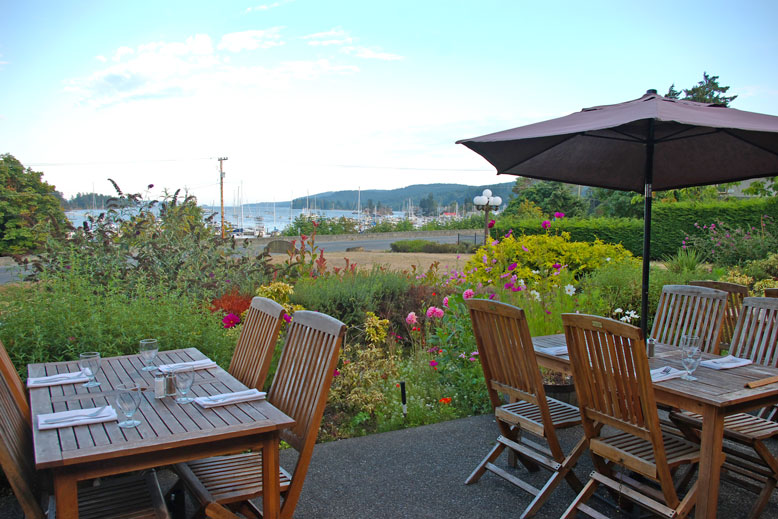 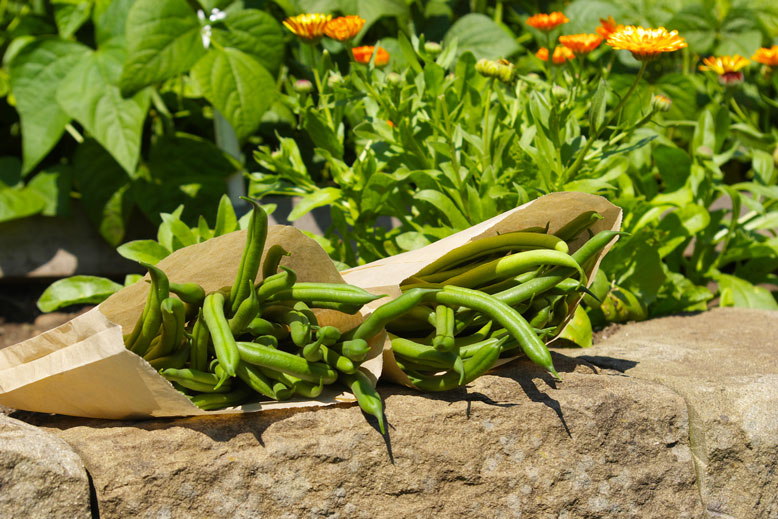 The greenhouses at Harbour House produce a huge yield as well. Scheres is able to generate crops year round with the addition of added light. Instead of 6 or 8 hours a day, he’s increased it to 16 with simple halogen lights. This creates the environment the plants need to keep producing and supplies the restaurant with an impressive 50% of its produce during the winter months.

“I’d like to see more year round farming” Scheres says. “It’s important that people see that it’s possible. You need to have a bit more patience, but you can do it.”

At just 28 years old, chef Winters is well ahead of her game. Her culinary training has skyrocketed in a short period of time. Traditionally trained in classic French with Japanese influence, Winters apprenticed under Takashi Ito at the Fairmont Empress. She starting competing at just 19 years and won the gold medal for Junior Team Canada at the 2008 Culinary Olympics. As a child, she learned from her father how to farm and hunt. “We grew up eating what dad caught, or grew” says Winters. “It’s very dear to my heart and I’ve carried that throughout my profession.”

Arriving at the height of the growing season, I was lucky to sample a good selection of the farms produce; heirloom and zebra stripe tomatoes, fresh basil and beet green pesto, cucumbers, fresh greens, French Charentais cantaloupe, and a variety of farm veggies.

For the upcoming event; Sip and Savour, Salt Spring’s Harvest Food and Wine Festival, Winters will be spit roasting a farm raised lamb. Harbour House will also host a Sparkling Wine Brunch at the restaurant. In February, the Hotel will hold its 6th annual Maple Syrup Day, which is sure to be fun event.

Embracing the farm-to-table movement is to value sustainable food relationships. It asks that we look for quality over convenience and to begin (again) making healthy connections with our food. Winters offers a chef’s perspective: “If you’re going to give the love on the plate, you need to follow that love all the way through the process.”

For an experience closer to home look for these nearby farm-to-table restaurants and purveyors:

Extra reading on the Farm-to-Table movement: Here and here.

“Gather July 9 – 16 on historic Linnaea Farm, Cortes Island, for their annual ORGANIC MARKET GARDEN WORKSHOP.” You’ve dreamed of ...
Read More
Welcome to Linnaea Farm on beautiful Cortes Island. This historic 314 acre organic farm on one of BC’s Discovery Islands in the Georgia ...
Read More
One of the greatest ways to enjoy the summer months is to visit one of our many outdoor markets. These family-friendly (and free) events are a great ...
Read More
As we near the end of 2014, it makes sense to reflect on the past year. I’ve noticed two significant trends emerge. First — and I’d like to ...
Read More
It’s been a while since I had any proper dirt. I’ve been living in the deep city and growing everything on my windowsills in small pots. For a ...
Read More
I thought it would be fun to visit some of the outdoor markets in Victoria and talk to different people at the stalls, just to see what their stories ...
Read More

Superflux Cabana has opened upstairs at 804 Broughton St (the former location of The Livet). Featuring lots of Superflux beer and a menu that ...
Read More
January|February issue is on the stands! Pick up a copy, or read the digital version. Read ...
Read More
I love love love this time of year. Everyday something new blooms and overnight it seems as though everything has grown at least 5-inches. Each ...
Read More