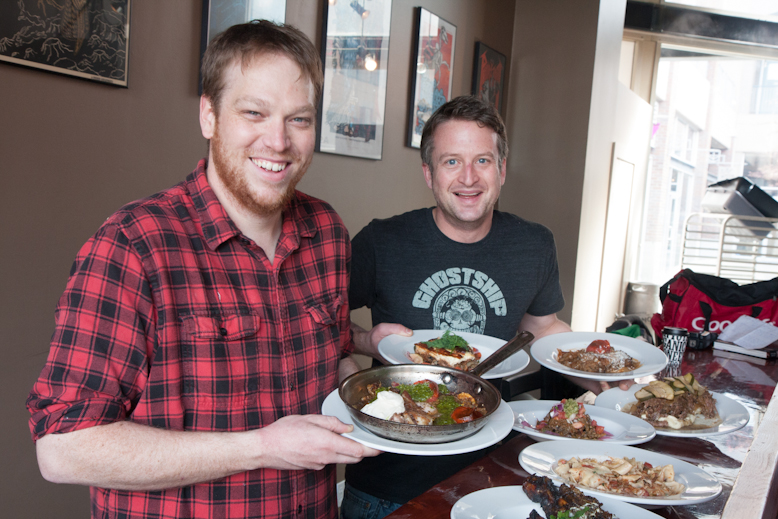 Meat is not generally considered a seasonal dish, for largely the same reasons that we rarely think about the animals that it comes from. Factory-farmed beef, chicken, and pork are available year-round from every conceivable retailer, either already prepared or packaged in a sterilized, neat, and nonthreatening form.

It might have taken over 50 years since the invention of the feedlot, but it now seems like we’re finally turning the corner on the value of fresh, local ingredients. And considering how large a part animal protein plays in our diets, it’s important to remember that locally raised meat should be just as big a focus as local or organic vegetables and other crops, whether we’re changing our ideas of what and when we should be eating meat, to whether we should be consuming it at all.

One of the best ways to better understand our consumption is to get close to the production. I’ve been spending a fair bit of time at Hank’s Untraditional BBQ lately; it’s such a good combination of creative, in-house made food, great staff, awesome music, and cheap beer that I think it is currently unmatched in the city. I was bandying about this idea of an article about lamb for the springtime, and when I brought it up with co-owner Clark, he offhandedly suggested they just order a whole one in the very next week. “Sounds great,” I said. “We could do each part of the animal in a different style,” he said. “ What about ones from all over the world?” “Yeah that’s what I was thinking.” See why I eat here?

Lamb is a classic springtime dish that’s known for being in season due to the fact that ewes go into estrus in the fall. Spring lamb specifically refers to lamb meat that is only three to five months old, the youngest type; most lamb is sold at six to eight months of age, and past one year it becomes a gamier meat called mutton. This gives you a sense of how fast livestock like sheep grow; they’re fully mature by age four and generally live between 10 and 12 years.

What follows is a photo essay documenting the breakdown of a lamb carcass into primals and subprimals, and then into a series of eight original dishes created by Clark Deutscher, co-owner of Hank’s (his partner Francois Pilon is up island at their second location in Ucluelet.) WARNING: Butchering a full-size, skinned animal is a graphic process. There’s no blood, but there’s lots of muscle, bone, and even kidneys. If you’re squeamish, you should probably skip to the food—but if you’re a carnivore, at least consider taking a look. “We feel it is no small undertaking to take an animal’s life,” said Clark in his notes to me. “As most of us aren’t vegetarian, we feel we must get rid of the disconnect. Folks shouldn’t be afraid to eat all that an animal has given us… Our overall inspiration for this undertaking is to show the enjoyment and nourishment an animal can bring.”

Superflux Cabana has opened upstairs at 804 Broughton St (the former location of The Livet). Featuring lots of Superflux beer and a menu that ...
Read More
January|February issue is on the stands! Pick up a copy, or read the digital version. Read ...
Read More
For a fresh take on salmon try this spicy ...
Read More