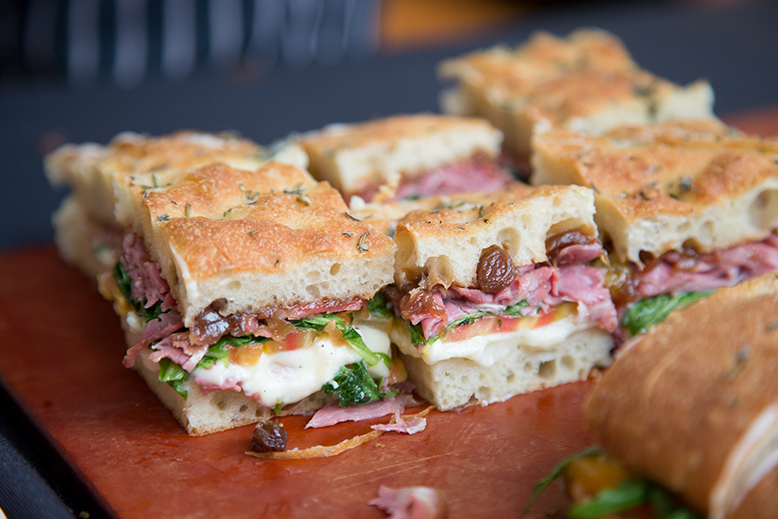 “Cross-fertilization – an interaction or interchange, as between two or more cultures, fields of activity or knowledge, or the like, that is mutually beneficial and productive”

Now going into its fourth year, Feast Portland has become known as much for the collaborations of both local and visiting chefs as it is known as a showcase for culinary Portland. Started in 2012 by Mike Thelin and Carrie Welch, Feast Portland attracts over 12,000 culinary and drinks enthusiasts to a wide variety of events both large and small. 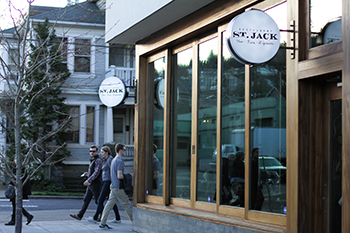 EAT reached Aaron Barnett, chef and proprietor of St. Jack restaurant in Portland, by phone to get an inside look at this wildly successful and popular event. St. Jack is known for its humble, rustic French dishes with a nod to Lyons. Barnett is a Canadian who worked at Lumiere in Vancouver (some of you might remember Barnett was Feenie’s assistant on his TV show) and at Gary Danko and Myth in San Francisco before settling in Portland to pursue his love of Pacific Northwest ingredients. His restaurant St. Jack was named as The Oregonian’s Rising Star in 2011.

When we spoke, Barnett was close to opening his new restaurant, Le Moule (2500 Southeast Clinton Street), a Belgian-style pub that features multiple takes on mussel dishes, pommes frites, Liège waffles, and, of course, imported and local Belgian and farmhouse beers.

Aaron Barnett: Feast Portland an exciting thing. Portland is not a big city by American standards. When it first started up, the restaurant scene here was growing so quickly—it’s still growing— and it brought in chefs from places outside of Portland like Chicago, New York, the Bay area and beyond, and you get a lot of chefs coming to work with local chefs. That’s been a lot of fun because you get to actually work directly with them. One of the years, I did a dinner at St. Jack with Thomas McNaughton, the chef from Flour + Water in San Francisco, which was a wonderful experience. 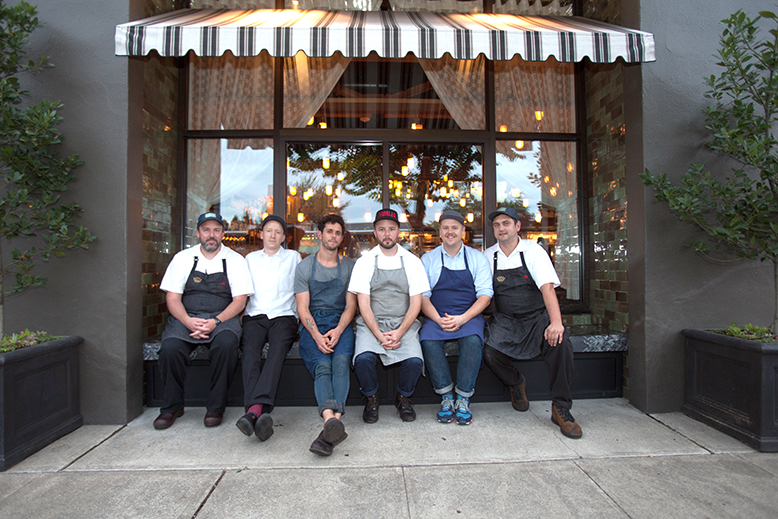 Portland is a small, tight knit community, and all the chefs know each other quite well, we all work together a lot, do a lot of events together—that’s one of the nice things about this city. Feast allows for chefs from other communities to come here and see what it is that we do here and how we work together. It’s been a huge boon. You get these rock star chefs from all over the country and you get the local favourites and the people who attend are blown away. It’s just a really good experience. No matter what venue you’re going to.

EAT: What are you doing at this year’s event?

A.B.: This year I’ll be doing the Sandwich Invitational. It’s a great excuse to meet people and meet chefs, and an excuse to have a few extra beers. 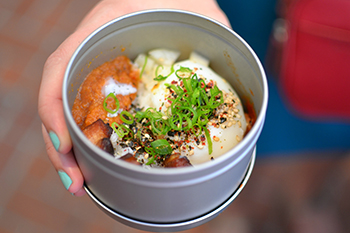 EAT: What else is good?

A.B.: The after-parties are kind of the big ones. There’s a least one every night, often two. There are after-parties, then after-after-parties. A lot of independent restaurants usually put them on. We typically start hearing about them a couple of weeks before. They tend be huge, overblown, and lots and lots of fun. If a chef has a relationship with another chef, maybe they’ll come in. I remember one year at Naomi Pomeroy’s Beast, Sean Brock from Husk in South Carolina came in and did a full, low country boil with corn, prawns, and potatoes in dining room and he was dumping giant pots all over the tables. There were DJs and bands, cocktails and beers. It’s a good way to blow off steam after eating too much.

A.B.: Breakside Brewery, The Commons Brewery are doing great stuff. And pFreim is doing Belgian-style beer. Upright Brewing is one of favourites right now with their French farmhouse to Belgians to sours to lambics. Interesting, quirky beers that you don’t see too often. Not just the IPAs anymore. 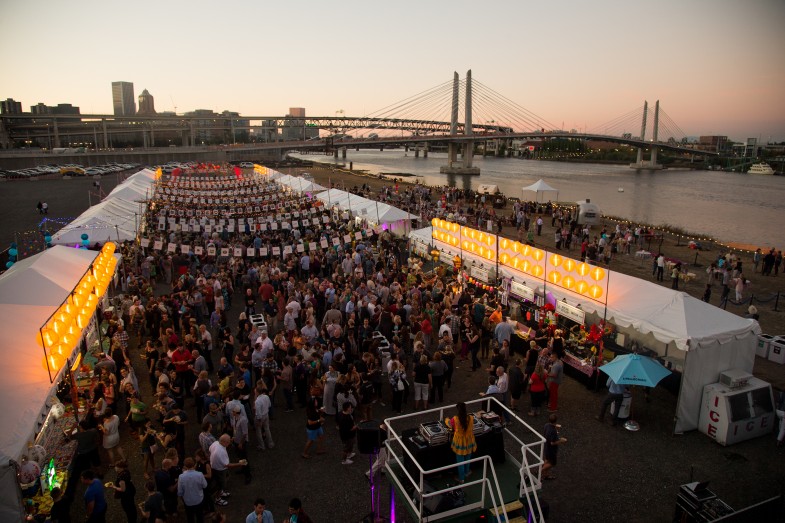 EAT: Where are you eating in Portland now?

A.B.: There are so many good food carts. There’s one called PDX 671 that does food from Guam. I’d never had food from Guam before. It’s kinda like a cross between Filipino and a little bit of Spanish– high vinegar content, lots of ginger and scallions. They do simple things like grilled chicken and shrimp and corn fritters. Remarkable.

Portland also has a huge Vietnamese food scene—one of the best in the country—and I end up eating at Pho Oregon a lot. They do a fantastic job with traditional Vietnamese dishes.

For newer places, I like Kachka. It’s a Russian restaurant, relatively new, that’s been getting a lot of good press, for good reason. And I like Expatriate, a bar owned by Naomi Pomeroy and my former bar manager, Kyle Webster. Their cocktail and bar food is one of the best in town. So well thought out. Another place I love is Pollo Norte that specializes in Mexico City-style rotisserie chicken with homemade tortillas and two different kinds of beans that’s actually more pork than beans. Their coleslaw is hot and fresh and made with jalapenos and lime. I probably eat there once a week.

A.B. It’s a fantastic way to show Portlanders what people outside of Portland are doing and it’s good for people here to see the interesting food trends from all over the country that we might be seeing here yet. I also think that it’s great for people from other parts of the country to come to Portland and see what it is we’re doing here. There are the stylistic differences, the trending ingredients; they all differ from place to place and even the just techniques and the plating – everything’s different just depending on what town you’re in. I think that what we do here is on par and we’re doing pretty fantastic stuff; it’s fun to show it off. Whether it’s the food, the booze, or the personalities, it’s fun to exchange ideas.

Feast Portland take place between September 17 -20th. There are still tickets available for: Widmer Brother’s Brewing Sandwich Invitational Presented by Dave’s Killer Bread on Thursday; Tillamook Brunch Village on Sunday; Friday and Saturday’s Oregon Bounty Grand Tasting; as well as several hands-on classes and Drink Tank events. The Package, which includes a ticket to all five main events, is also still available. You can find the full schedule of events, including what is sold out/still available, here: http://www.feastportland.com/schedule/

The article on L’Apéro in the May|June issue should have stated Chef Andrea Maiolo staged at The Courtney Room and Zambri’s and that he held the ...
Read More
May|June issue on the stands. Read ...
Read More
The Belfry Theatre’s ninth annual fine wine auction and tasting event takes place at the Delta Ocean Pointe Resort. This year’s live auction ...
Read More