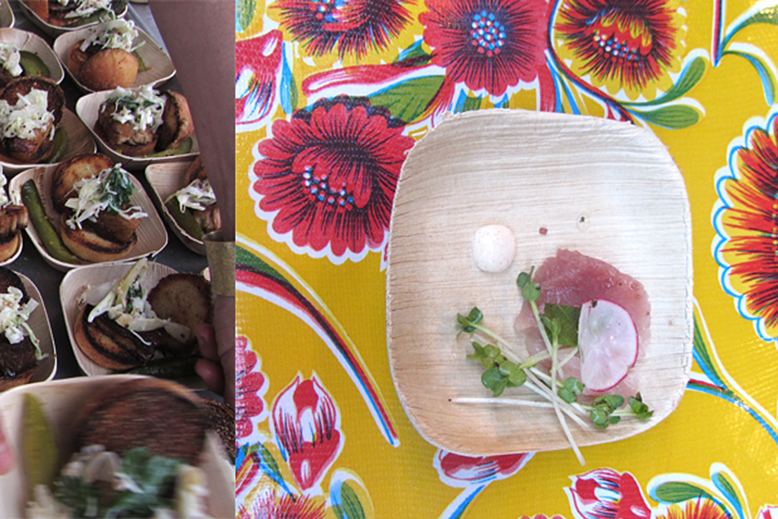 Chef, wineries, breweries, TV food celebrities, and food producers all came together in a full-on meeting of the mouths to cement Portland’s (Oregon) position as one of the great food cities in North America. Move over San Fran, stand down New York, by all accounts (see #feastpdx) the inaugural Feast Portland (September 20-23) presented by Bon Appetit magazine was innovative, wildly successful, immensely edible, and will go down in food history as Portland’s coming out party-to-end-all-parties. If you weren’t there, you missed the best kitchen party a city can throw.

For four days, thousands of guests nibbled, sipped and supped their way through multiple tastings, competitions, double chef dinners, cooking demos, and an enlightening and entertaining speaker’s session. Hotels were sold out. Deals were done to secure seats at exclusive dinners. People walked and biked everywhere in a progressive city that lives the sustainable life. Lumberjack shirts, big beards, trendy hipsters, and local designer dresses were all in attendance.

The festival, while slick and professional, remained true to its west coast, Oregonian roots—casual, gracious, social, and down-to-earth. Portland’s culinary community threw out the rules while supporting their farmers and cooked like hell. The phrase “global local” was used to describe Portland’s food culture; chefs are cooking with a local larder but re-imagining global cuisines to steep their dishes with taste. Is this the future of food? This is a place where Nong Poonsukwattana’s Khai Man Gai represents the city as comfortably as Sunshine Tavern’s Dungeness Crab Roll with Tarragon. Where Maple-Glazed Pork Belly with Pickled Watermelon Slaw from Beast is as exhilarating as Pok Pok’s Khao Kha Muu (stewed pork shank and rice). The lines between cuisines have not only been blurred, they’ve been blown to smithereens. But make no mistake, this is not a return to the fusion cooking of old: the flavours here are clear, distinct, deeply satisfying, clean-tasting, and defined.

The Basics As You’ve Never Seen Before, All In One Place.

If the sandwich is the ultimate finger food and beer is its happy mate, then the Portland Monthly Sandwich Invitational went far and beyond two slices of bread slapped together and downed with a can of Coors. Fourteen chefs from restaurants around Portland (and a few other top food-forward cities) were challenged to make the best sandwiches ever in a competition. The longest line-ups were for Charm City Cakes’ (Los Angeles) Egg McDuffin—an English muffin with fried egg, cheese, and three types of pig: bacon, sausage, and speck. The most major badass award should go to Foreign & Domestic (Austin) for its Texas Smoked Carlton Farms Pork Butt and Pickled Dungeness Crab, Oregon Pear Slaw with Pig’s Ear Gravy sandwich. The prize for top sandwich went to PDX’s own Naomi Pomeroy (Beast) and her aforementioned Maple Glazed Pork Belly sandwich. Sometimes you just can’t beat the simple, wholesome taste of pork belly. 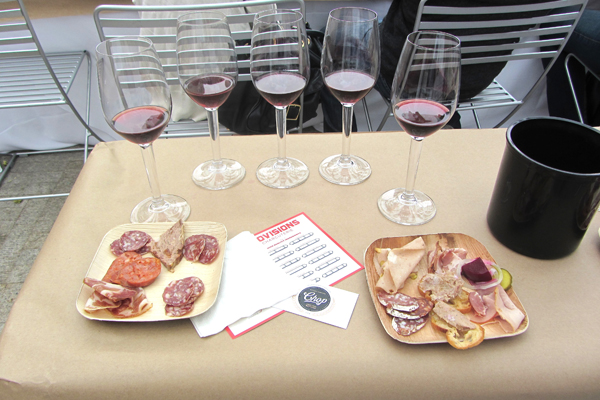 The set-up at the Pig & Pinot Noir tasting seminar

The day began with salami. Billed as a Pork & Pinot Noir panel/demo, it was a sit down tasting of charcuterie that had been made from pigs raised on an Oregon diet and matched to the region’s pinot noirs. An expert panel—led by New York’s most affable food and wine expert, Joshua Wesson, along with two Portland charcutrists and somms (including Savanna Ray from Wildwood)—discussed, plotted, and suggested which pinot went best with the cured meats. The saucisson d’Arles (just pork & salt), salame finocchiona (garlic, black pepper & fennel), mortadella, and chorizo Navarre (sweet paprika, garlic & cayenne) from Olympic Provisions and Chop were all paired with a line-up of pinots from wineries like Rex Hills, Van Duser, and Elk Cove. I fell in love with the 2010 Rex Hill and a dried sausage with herbs de Provence combo (savoury and herbaceous) and the 2010 Van Duser with the finocchio match (which brought out the wine’s fruitiness). The conclusion reached was that there is an amazing diversity of salumi with a pronounced terroir in Portland.

One of the must-attend events of the weekend was the daytime Oregon Bounty Grand Tasting—an opportunity to sample Oregon foods, beers and wines. Breweries, wineries and artisan food producers set-up in a huge tent in Pioneer Courthouse Square. We wandered up and down the aisles chatting with the producers and tasting…and tasting. Some favourites: the pinot noirs/rieslings from Brooks, White Rose and Montinore; the home-spun huckleberry pie (amazing crust) from Grand Central Bakery; and the Cajeta or goat caramel from Portland Creamery (it’s so good I wanted a case—really); and the Foieterra (foie gras & chocolate spread) by Xocolatl de Davíd (turned what you thought chocolate should be on its head). 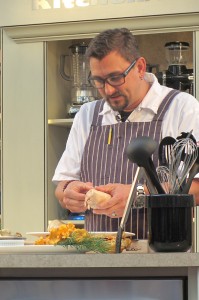 As we wandered and tasted, cooking demonstrations were being held on the Kitchen Aid main stage. I caught Chris Cosentino from San Francisco’s Incanto showing an enthusiastic crowd how to make a foie gras, Douglas fir and Matsutake (pine) mushroom dish al cartoccio (an Italian term for cooking in parchment paper). Other demos included: Nancy Silverton (Osteria Mozza) making pesto with a mortar and pestle; Mark Bitterman’s Build Your Own Bitters; and the highly sought after demo of Thai Street Food by Andy Ricker and Nahm’s David Thompson.

For me, the highlight of the festival was the Feast Portland Night Market, an intoxicating mix of global street food served up under the Portland night sky at the historic Ecotrust Building in Portland’s Pearl district. Stalls were set cheek to jowl as the sold-out crowd jostled for a spot in line to try mainly Southeast Asian small plate tastes from some of Portland’s best and such luminaries as Anita Lo from Annisa (New York City), Paul Qui from East Side King (Austin), and David Thompson from Nahm (Bangkok). Adding to the culinary pop and sizzle was a loud sound track of driving beats, coloured lanterns strung high above the crowd, and the discussions and laughter of the animated crowd.

I started at one end of the long line of “street” stalls with a bowl of spicy Beef Bone Soup from Biwa (PDX), where you added your own condiments from a choice that included chilies and cilantro; moved along to David Thompson’s (Nahm) skewers of smoky Grilled Mussels done Southern-Style (the aroma alone drew me in); and worked my way along through the throng to eat Anita Lo’s meticulous, clean-tasting Albacore Tuna with Spicy Cod Roe and Radishes (went back for seconds). A pause for a cocktail–a Pink Hotel (Hendrick’s Gin, Solerno, Mint and Bitters) mixed by Alan Akwai, the bar manager at Market.

The rest of the evening went pretty much the same. Eat, eat, eat, drink, and eat. I sampled a show-stopping, steaming Thai Coconut Crème/Crispy Pork Rib from Uchi (Austin) – one of my favourites of the night; followed it with a Szechuan-style dish that was sweet, spicy, and garlicky from Eddie Huang’s Baohaus (NYC); and then hoovered drunken date doughnuts with 7-spice sugar, XO shrimp chips, sweet soy and tea-cured eggs, pork and sticky rice from Departure‘s Greg Gourdet (PDX), Tim Horton’s forever banished from my mind. One of the better beers of the night was Lampoc Brewing’s Proletariat Red (chestnut coloured, toasted malt with biscuit, caramelized pear and cinnamon), which seemed to go with everything. 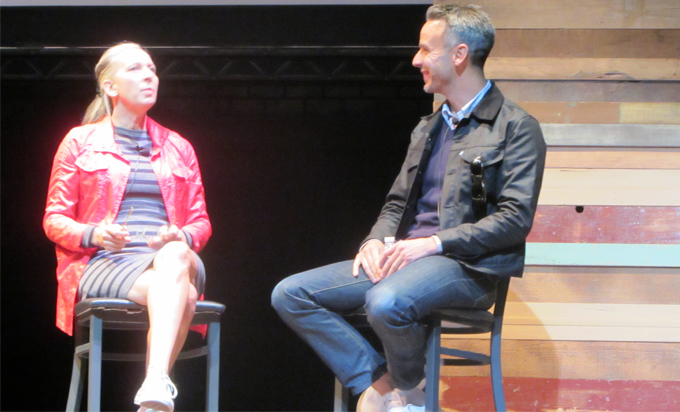 Feast Portland will rank high as one of the best food events held this year. See you again next year.

With Phase 2 beginning, restaurants and patios, tasting rooms and coffee shops are reopening. This is an ongoing process, with many changes, so we ...
Read More
Kettle Valley winery, one of British Columbia’s founding wineries, began with two good friends; Bob Ferguson and Tim Watts, a passion for wine, ...
Read More