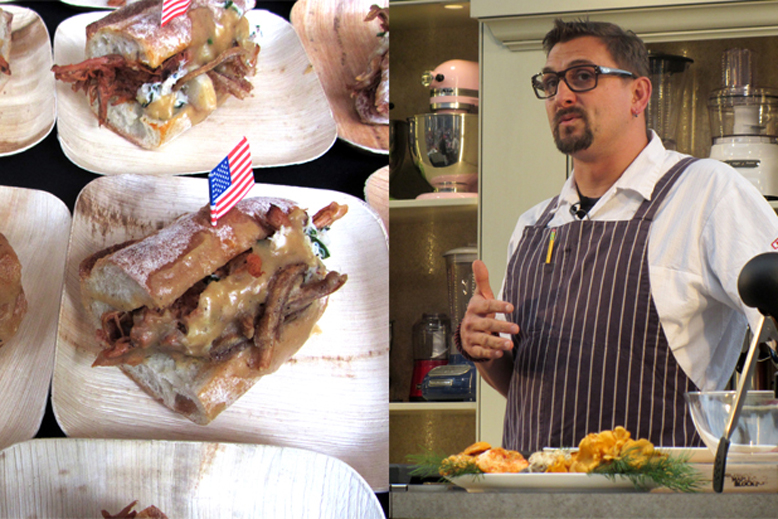 I had the opportunity to attend last year’s inaugural Feast Portland, and this year’s line-up of events promises to be just as innovative and exciting. For four days, some of the best food artisans, winemakers, brewers, and chefs from Portland and from around the United States will gather to cook, drink wine and beer, and talk about what’s important in food culture today. At last year’s event, I was there to not only eat the food and drink the wine, but to soak up the energy and enthusiasm from thousands of festival-goers—Feast Portland was easily catapulted to the top of my must-attend list for this year.

Mike Thelin and Carrie Welch hatched the idea for Feast Portland in the afterglow of the International Association of Culinary Professionals’ annual conference in Portland in 2010. They felt Portland needed a platform to build on the city’s growing prestige as a food city. Thelin is a food writer with his own TV show and Welch’s background is as an executive with the Food Channel. They knew they wanted it to be a high quality, modern food festival that would showcase Oregon’s bounty of food, wines, and beers. But they also wanted the event to tackle cultural food issues and give back to the community with donations to local charities and initiatives such as the No Kid Hungry campaign.

“We wanted an event with high production values and the best chefs from the region, the country, and the world. We wanted to create an event where as many people as possible could attend. We wanted to make guests feel that they’re part of this great food revival that’s happening all over the world. Around 30% of tickets sold last year were from out of state; we got a lot of guests from Vancouver, Los Angeles, and New York. But we’re also very proud that the majority of the tickets were sold to Oregonians who wanted to come celebrate our state,” Thelin explains.

To make as big a splash as possible, peers and colleagues from around the country were invited to come and experience Oregon, and to cook with local ingredients. And they came. Noted food writer Mark Bittman was there; Fergus Henderson, too. Nahm’s chef David Thompson did a demo on Thai street food, Austin’s Uchi cooked their Thai Coconut Crème/Crispy Pork Ribs at the global street food-focused Night Market, and Gabrielle Hamilton from Prune in NYC talked with Bon Appétit editor Adam Rapoport at the Whole Foods Market Speaker Series.

“We’ve dubbed this as the ‘if it ain’t broke, don’t fix it’ year,” says Thelin, “but we’ve added more dinners and stronger panels to the Speaker’s Series, building on last year’s success, but just more it. Looking ahead, year three (2014) will be the year of surprises.”

While some of the events for this year sold out quickly, there are still many tickets available. During the day, there are affordable classes, seminars, and cooking demos while at night, the big events take place.

On Thursday, the marquee Sandwich Invitational event elevates the sandwich with imaginative interpretations. Look for great sandwiches from  Sean Brock, McCrady’s (Charleston, SC), Jason Barwikowski, The Woodsman Tavern (Portland, OR), and Stuart Brioza and Nicole Krasinki, State Bird Provisions (San Francisco, CA), among others. With big sandwiches and lots of beer and wine, it’s a great walkabout event. There is also a special east/west dinner (part of the Dinner Series) with Sarah Schafer Irving Street Kitchen (Portland, OR) and Floyd Cardoz, North End Grill (Portland, OR), and wines from Sokol Blosser and Willamette Valley Vineyards.

On Friday, there are a number of tasting seminars (Pinot: Oregon versus the World), talks (The American Experience Through Food), the Cookbook Social, and the main event, Oregon Grand Bounty Tasting—your chance to sample and meet dozens of the Northwest’s top wineries, breweries, vendors, and artisans (e.g. Jacobsen Salt Co. , Oregon Olive Mill).

Saturday, it’s High Comfort at the Nines, billed as “what grandma’s comfort cooking would taste like if she had an immersion circulator and a pantry full of Iberian ham, foie gras, and candy bars” (last year there was a Dungeness crab Rueben with sturgeon caviar!) This year’s line-up of great visiting chefs will have you salivating: April Bloomfield, The Spotted Pig (NYC, NY); Stephanie Izard, Girl & The Goat (Chicago, IL); Matthew Lightner, Atera (NYC, NY); David McMillan and Frédéric Morin, Joe Beef (Montreal, QC); and a who’s who of pioneering Portland restaurants. There are also still plenty of classes, talks, and demos available (check out the Best Butcher and Fishmonger Face-off competition, a $5 donation event).

Sunday, things start to wind down, but there are still a number of great classes to attend. This one caught my eye— Portland’s Olympic Provisions will be giving a demonstration on how to make charcuterie from one of the most valuable of pig parts—the head. How cool is that?

Pre-festival, Travel Oregon is offering Trails to Feast—a number of food trips that are culinary paths designed to help visitors experience where all of Oregon’s good ingredients come from, and meet the folks who make them.

Feast Portland donates its net proceeds to two worthy charities working to end hunger in Oregon and around the country – Share Our Strength and Partners for a Hunger-Free Oregon.

November | December issue on the stands. Read ...
Read More
For the ninth year in a row Rancho Vignola is setting up its Vancouver Island Harvest Sale here at the Mary Winspear Center in Sidney. Many of ...
Read More
Season’s Greetings EAT readers! We at EAT are looking forward to all the wonderful seasonal baking on offer around the city. One of the great joys ...
Read More
Masterclass Candied Citrus Holiday ...
Read More
Chardonnay is proof that everything old becomes cool again. After attaining a pinnacle of popularity in the late 1980s, the inevitable backlash ...
Read More