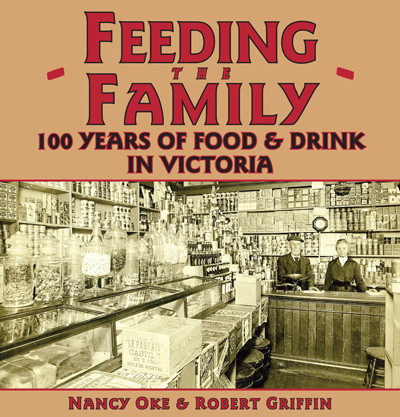 “You couldn’t imagine the range of food available in Victoria in the 1860s,” says Robert Griffin. “It was all imported, but you could buy anything you wanted by 1858.”

Griffin, a history curator at the Royal BC Museum, delves into the world of Victoria’s food and drink alongside volunteer researcher, Nancy Oke to unearth the stories that fill the pages of Feeding the Family: 100 Years of Food & Drink in Victoria. Alongside photos of merchants and products, Griffin and Oke piece together the trials and successes of Victoria’s pioneer butchers, bakers and brewers of the 19th century.

“There’s no nice set of records; the information is scattered everywhere in bits and pieces for you to try and weave together,” describes Griffin. Oke spent hours reading through newspapers and trying to match photos with stories about local shop owners. In total, the book is the culmination of nine years of research.

The pages speak of the evolution of Fort Victoria’s food sources from initial trading with local First Nations to the planting of the Fort’s first orchard in 1846. Soon, not unlike modern-day Victoria, the Fort relied heavily on imported foods to feed its growing population, especially as gold prospectors flooded north in the late 1850s.

During these boom years, Victoria was a bustling centre of commerce for the province and attracted a wide range of colourful merchants. Times Colonist newspaper clippings recount feuding advertisements between local butchers (the Goodacres and the van Volkenburgh brothers) and stories in San Francisco’s Daily Evening Bulletin quoted enterprising American grocers Peter Lester and Mifflin Gibbs describing business in Victoria as, “generally run by old fogies,” after arriving from the American city. 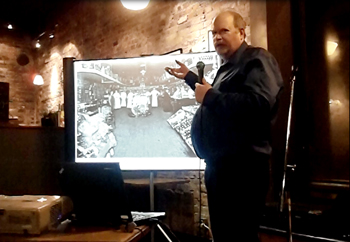 Feeding the Family aptly recounts the challenges associated with running a grocery or bakery in early Victoria. The boom and bust economy saw one baker’s monthly orders drop from 5000 loaves in 1865 to just 253 loaves in 1871. The completion of the Canadian Pacific Railway terminal in Vancouver was a major blow and drew merchants and commerce to the mainland from 1868 onwards. Prohibition during the 1920s also challenged the city’s numerous brewers and eventually reduced their numbers to just two, Victoria-Phoenix and Silverspring breweries.

Griffin details the consolidation and loss of local producers across the food and drink industry throughout the book. The 1920s brought the first large-chain grocery stores, Piggly Wiggly’s and Safeway, to Vancouver Island and many Victorians soon bought their produce and meat at a single store. Local products were absorbed by larger brands and independent grocers closed, including Victoria’s attempt at a permanent downtown public market.

However, Feeding the Family does not leave the reader feeling saddened by the passing of Victoria’s prominence as a bustling food centre in the 1860s. The book paints an exciting historical picture of local food production and hints at what successes may lie ahead (like the opening of the permanent downtown public market in June 2013!). What is clear, is the close relationship between the city’s food processors to the local and regional economy. Fittingly, a final page of the book features a 1928 Times Colonist ad that reads, “Insist on the products of your local countrymen…take a personal hand in the destiny of British Columbia.”

With Phase 2 beginning, restaurants and patios, tasting rooms and coffee shops are reopening. This is an ongoing process, with many changes, so we ...
Read More
“It’s not easy being green.” -Kermit the Frog Sorry Kermit. The times have changed. There are numerous shades of green in the wine world ...
Read More