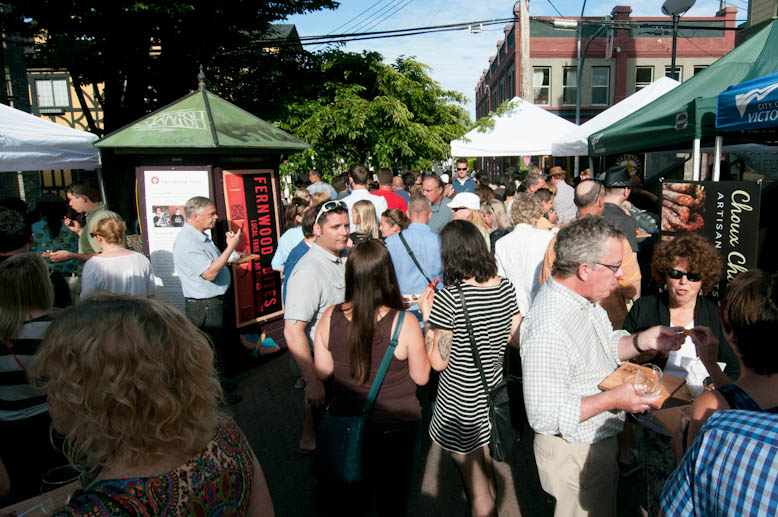 The ideal neighbourhood often seems like a utopian fantasy. A community that could mobilize itself to raise funds, build affordable housing, celebrate families, and promote sustainability all from within? That’s a place anyone would want to live. And the type of responsible, creative and inventive businesses that would choose to call such a place home should be a draw for any citizen.

Luckily enough, Victoria hosts such a borough: still funky, ex-junky Fernwood, and we have the tireless community non-profit, the Fernwood Neighbourhood Resource Group Society (AKA Fernwood NRG) to thank. We at EAT were delighted to do our part as a media sponsor for the 5th edition of their annual fundraiser, Fernwood Bites, and our editors were foolish enough to unleash your very own food-crazed, beer-swilling hack to review it.

People were already lining up outside the gates at 5:00 pm, and when the event started a half-hour later, the Cook Culture booths right beside it were immediately mobbed. The EAT Magazine table was ensconced in the corner and I barely escaped with my camera gear, vowing to return to sample chef Khalil Akhtar’s hot-from-the-fryer pakoras when it cleared up a little. 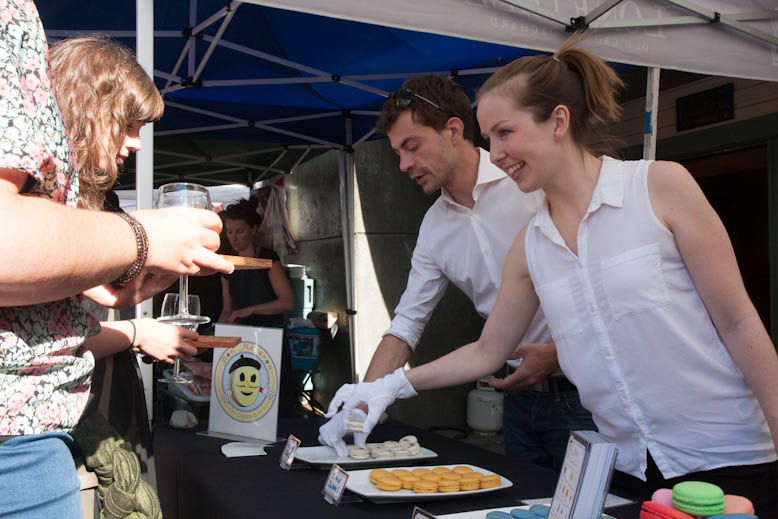 Much ink has been penned on the subject of Bon Macaron Patisserie and their melt-in-your mouth confections. I always struggle to get multiple bites out of them in contravention of their tendency to implode in a sushi-like fashion. Co-owner Yann Fougere was on hand at the event with three varieties, one of which stood out for my savoury tooth. “It’s an almond meringue, and on the inside is cream cheese, pineapple and basil. These savory flavours are more meant to be paired with a glass of wine,” he said with a grin, comparing them to the sweeter blueberry and salted caramel options.

Our own editor, Gary Hynes, insisted I try Cook Culture chef Cosmo Meen’s famous soup, available at the Hot and Cold Café. “It’s a yellow coconut curry, a vegan soup, and it’s got lots of delicious root vegetables in it,” said Cosmo. “It’s got potatoes, yams, celery, and carrots, and it’s one of our most popular soups down at the cafe for sure. We sell it frozen out of the freezer or hot with sandwiches and salads.” The small bowls were garnished with shredded cabbage, red onion, and cilantro, making for a fresh-tasting light soup that didn’t clash at all with the warm weather. 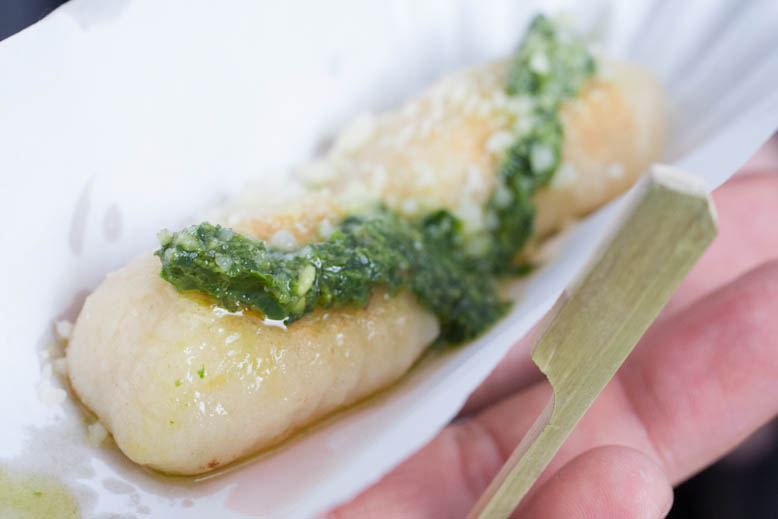 One of the most memorable dishes for me was the hors d’oeuvres from 10 Acres Bistro & Bar. Chef Dwane MacIssac was there with a blowtorch, bubbling the top of a series of small ramekins. “It’s rabbit from our farm out in North Saanich, and  cooked confit style with duck fat, so it falls off the bone, and then it’s whipped up with duck fat and put back in these little pots with more duck fat and then a cherry gastrique.” I’m seeing a theme here, I said. He laughed. “Duck fat, duck fat, duck fat and rabbit.” The piece of crispy bread was barely enough to dig down through the layers and scoop up the rich, smooth, salty paté.

Eating in the sunshine summoned a powerful thirst. I gravitated to the Spinnakers booth to meet Ryan Bangma and sample this year’s batch of Hefeweizen. The beer is made with Canada’s first named wheat, Red Fife, which was recently recognized as a heritage food by the Slow Food Foundation’s Ark of Taste. “What I notice about the beer is you still get that banana flavor, it’s not as heavy on the clove as we’ve got it in the past few years. Delicious, easy drinking, great beer for summer,” said Ryan. The Hef came off with a gentle, mild flavour that showed a little more hop than most weizens; it’d be great for IPA fans looking for a less intense session beer, or anyone new to the banana-ness of most Hefs. 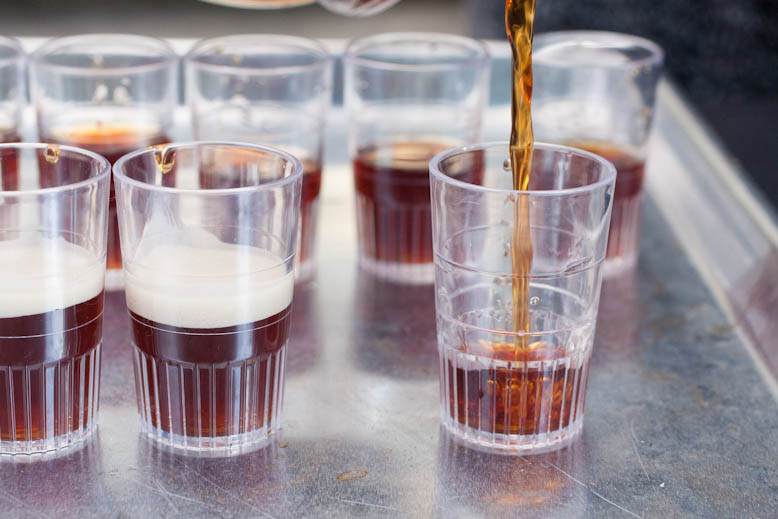 Discovery Coffee was set up as well, offering their new bottled cold brew made with Honduras Capucas beans and topped with foam made from Phillips’ Intergalactic Root Beer. “It’s an 18 hour process, with the cold water seeping through the grounds, and you can keep it for up to two weeks and it’ll be beautiful,” said Beth Lisson. “The cold brew brings a mellower flavor to the coffee, sort of a chocolaty, buttery, creamier kind of notes than a hot brew method would.” The small shots were bracing and nutty with a bit of an almond flavour, perfect for a hot day. 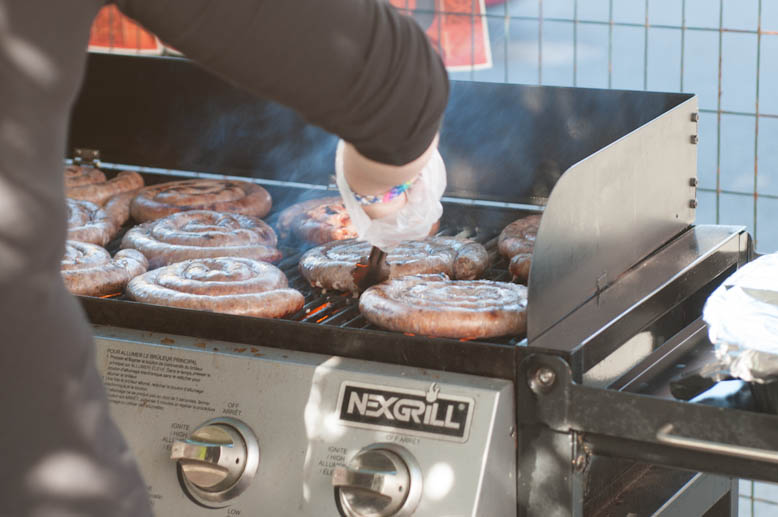 The two biggest lines at the event were for the return of the curled South African boerewors (sausage) from Aubergine Specialty Foods, “braaied” hot on the grill, and the massive gnocchi being sautéed by Kyle Gignac of Padella Italian Bistro. On everyone’s plates throughout the evening you could see hot dog trays filled with the gently browned potato pasta, slathered in pesto sauce. I managed to snag my own before they all disappeared; that doughy chewiness is such a unique texture you only find in good gnocchi.

I was pleased to see my friend Mike Ireland and Olive The Senses co-owner Emily Lycopolus on the scene as well. I saved their booth for dessert and was rewarded with experiencing their Cara Cara Orange and Vanilla Balsamic. “It’s aged twelve years before it’s infused with real orange and vanilla beans to give it that delicious flavor, so there’s no added sulfates or sugars,” said Mike. “It’s just the naturally occurring sugars from the orange.” I saw plenty of people try mixing the very complementary oils and vinegars on tap, as well as pouring the Persian Lime oil directly into their Spinnakers hef – a highly recommended pairing. 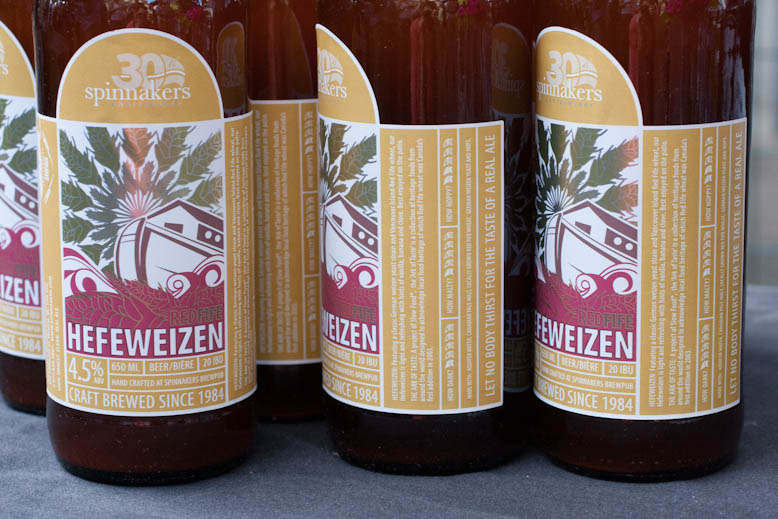 Other standouts were the tea sangria from Silk Road made with their rooibos with hibiscus, bergamot and orange, and Lonetree Cider with their exciting new Ginger Apple variety. I know I’ll be drinking quite a few more of their 78-calorie cans this summer. And speaking of crushed, boozy apples, Sara Park from Sea Cider Farm & Ciderhouse shared some exciting news; a rhubarb cider is on the way, along with their first-ever draft cider being developed by their new Assistant Cidermaker, originally from Summerhill Winery. “Winemaking is quite similar to cidermaking, so it’s very cool to have that kind of expertise,” said Sara. “And it’s also cool to have two women cidermakers as well.”

As the crowds began to dissipate, the mix of great food, cold-brew caffeine, and alcohol hit me all at once. A beatific grin spread across my face and I had to sit down. Thanks to Fernwood NRG and all the vendors for such a wonderful Sunday evening!

Check out the rest of the photos in our Facebook gallery below!