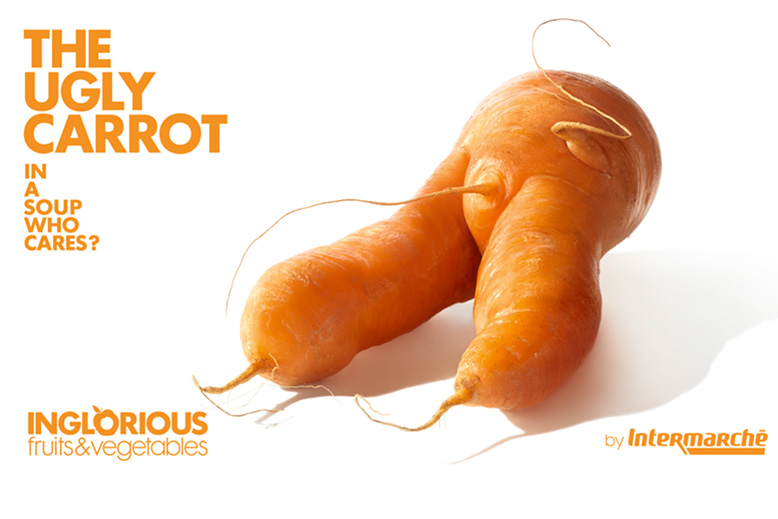 In Canada we waste nearly as much food as we eat. Approximately 30 percent of that food is fresh fruits and vegetables—25 million pounds—rejected before it reaches the distributors, stores and our plates.

Take for example, the salability requirements for a Canada N0 1 carrot: “Carrots may not be rough, materially misshapen, or materially affected by secondary rootlets … sharp curves, double corkscrew like twists and curves … are scoreable.” Source

These rigid guidelines have resulted in consumers accustomed to expect uniform, flawless produce from our grocery stores. Farmers are turning food into feed if it doesn’t fit cosmetic parameters. Yet in fact, these unsightly fruits and veggies are just as edible and nutritious as their prettier counterparts.

Vancouver couple Jen Rustemeyer and Grant Baldwin, creators of the documentary Just Eat It, believe “how we as a society value food is a mindset that needs to change”.

As it turns out, consumers are starting to think about what’s on the inside and misshapen produce is getting a second look. In an effort to fight food waste, campaigns such as the “ugly” fruit and vegetable movement are sweeping through markets and attitudes are changing on a global level. Retailers have begun rescuing produce deemed too wonky, too tiny, or just too ugly and are selling it at reduced prices.

Last year, Waitrose, a U.K. supermarket began selling their line of weather- blemished apples —the result of freak hailstorms at their South African orchard suppliers. According to spokesperson Jess Hughes, consumers “will scoop up tasty uglies when they know the story behind their unfortunate looks.”

To reduce unnecessary food waste in Canada, Loblaw Companies Ltd. announced a new campaign called “No Name Naturally Imperfect”. Misshapen apples and potatoes are sold at a 30 percent discount at Real Canadian Superstores and No Frills stores in Ontario and Maxi stores in Quebec.

“We often focus too much on the look of produce rather than the taste,” said Ian Gordon, senior vice president “Once you peel or cut an apple, you can’t tell it once had a blemish or was misshapen.”

Last year, French supermarket Intermarché began a clever marketing campaign to celebrate the beauty of the ugly and failed fruits and vegetables such as the Grotesque Apple, the Failed Lemon and the Unfortunate Clementine. The temporary campaign Inglorious Fruits and Vegetables sold imperfect produce at a 30 percent discount. The initiative was a huge success and received staggering response on social media while store traffic increased by 24 percent.

Initiatives like Portugal’s Fruta Feia aim to fight the standardized food trend by changing consumption patterns and creating an alternative market for ugly fruits and vegetables.

Adam Orser, owner of The Root Cellar in Victoria, says repurposing and repacking imperfect fruits and vegetables is “a complete necessity” and something they’ve been doing since day one. The store’s repacking program saves $100,000 – $200,000 annually, Orser says. This entails culling every single day and packaging like items together to be sold at a reduced rate.

What sets the Root Cellar apart from other grocery stores is their unique waste reducing produce program. “It’s our competitive angle,” says Orser. “We’ve always offered orchard run fruits (not processed, sized, or waxed) and choice grade produce at a fraction of the standard prices.”

As consumers, we can start fighting food waste by reconsidering our beauty standards when it comes to fruits and vegetables; if a carrot is forked, do we really care? When you’re at the grocery store remember, the golden (delicious) rule: size, shape, and colour don’t matter, it’s the taste that counts.

Go for the uglies. If you can find them!

November | December issue on the stands. Read ...
Read More
For the ninth year in a row Rancho Vignola is setting up its Vancouver Island Harvest Sale here at the Mary Winspear Center in Sidney. Many of ...
Read More
Season’s Greetings EAT readers! We at EAT are looking forward to all the wonderful seasonal baking on offer around the city. One of the great joys ...
Read More
Masterclass Candied Citrus Holiday ...
Read More
Throughout the day, I spend a considerable amount of time glued to my phone. While this addiction is probably not the best habit I’ve developed, it ...
Read More