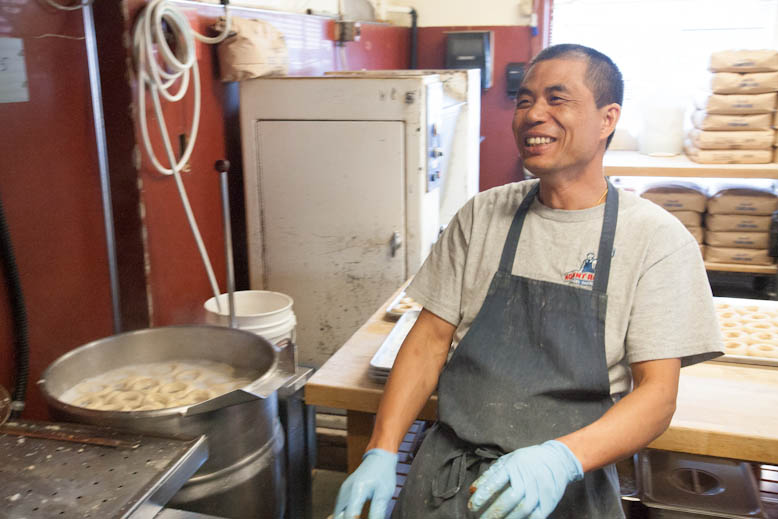 There were few bar mitzvah brunches in Vancouver that didn’t feature a fresh crop of bagels. Their twisty, chewy, bready platforms bore liberal schmears of cream cheese and strips of brined salmon, sprinkled with capers and red onion — simultaneously both Westcoast and Eastern European. The ready bagel availability of my one-time employer Solly’s Bagels and their cutthroat competitors Siegel’s was one of the things I was sad to leave when I moved to Victoria in 2008 — a quick scan of the web way back then revealed few local suggestions.

There are fundamentally two types of bagels. The kind you buy at the grocery store is typically New York style: flour, salt, water and yeast, formed, boiled, and baked. The New York style tends to be big and airy, close to a normal bread texture. If you’ve ever eaten at a Great Canadian Bagel franchise or ordered a Bagel BELT, chances are it was one of these. They’re great for sandwiches since chewing them won’t pulverize the other ingredients.

The second type is Montreal style, which are smaller, denser, and chewier. These are classically shaped by hand, baked in a wood-fire oven, and made without salt, with egg, and boiled in honey-sweetened water. Each bagel packs the carbs of several slices of bread, and the power of their flavour isn’t lost in thick, rich cream cheese – so these are my obvious favourites. After a few years without a regular dose, I was craving the weekend morning ritual of slathering an onion bagel with chive and garlic and repelling everyone for hours.

When the pangs get particularly bad, I have an easy resort. Around the corner from my place is Bagels on Broad, a humble family-owned café that boils and bakes bagels out of frozen dough from Benny’s Bagels in Vancouver. The café’s been around since 1996, but Jin and his wife and sister took it over in 2007 and have been maintaining the same recipes. “One or two minutes in boiling water, then take them out, salt, seeds, onion or sesame, toppings, then bake for five minutes,” he says. “People think these are very heavy, maybe 7-8 pieces of bread, but these are very airy. Maybe only 2 slices because there’s no eggs or milk.” 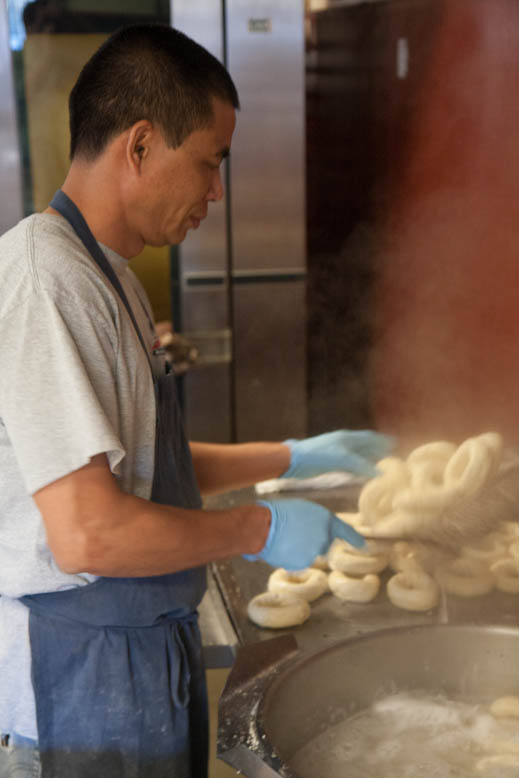 Jin’s bagels might not be so bad for my waistline, and they’re certainly delicious in their own right – but they’re not quite the chewy jewels of my memories. Mark Workman and his friend started Mount Royal Bagels two decades ago to satisfy their similar desire, and with an authentic and traditional Jewish recipe to boot. “I grew up eating bagels in Montreal and there wasn’t that kind of thing here, and I said let’s do something about that … I can’t believe it’ll have been 22 years now in September that we’ve been here,” says Mark. “The people of Victoria have been very loyal and I can’t thank them enough.”

It might not be the full Montreal treatment, but Mount Royal makes the bagels of my childhood, and they have their production down to a science. The dough is made from Albertan flour and a secret mix that Mark refuses to describe on pain of death. Then it’s put in an industrial mixer and run through a former and shaper before boiling, then baking in a convection oven.

Mark credits the consistent quality of their nearly 5000 daily bagels to his dream team, Mr. Ding and Mr. Chen. The two bakers have worked at Mount Royal for almost as long as it’s been open, and according to Mark, their efficiency and attention to detail make the bagels what they are. “They just keep getting better and better,” he says. “Their commitment to quality is insane, you can’t buy that kind of dedication.” The team meets weekly to discuss changing conditions in the bakery; more rain in the winter means less water in the dough, and vice versa in the summer, for example. “Having a recipe and a process is one thing, but it’s being able to follow through with it.”

Mount Royal also serves several varieties of cream cheese, made from a simple base with only four ingredients. The Basil and Garlic was tempting, but I couldn’t resist something called “Cilantro Supreme.” I carried my bounty home and invited Kaitlyn over for breakfast. It only took one bite before Victoria felt that much more like home.

The article on L’Apéro in the May|June issue should have stated Chef Andrea Maiolo staged at The Courtney Room and Zambri’s and that he held the ...
Read More
May|June issue on the stands. Read ...
Read More
Photo: Shaw Ocean Discovery Centre   Credit:Rebecca Baugniet “Are you ready to be transported to the bottom of the Salish sea?” It was a cool ...
Read More