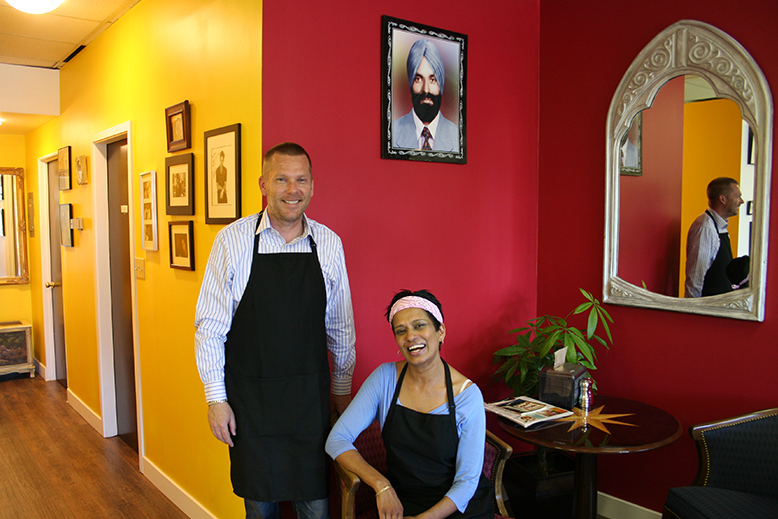 Delhi, now open at the corner of Bay and Government St, is an intriguing mix of East Indian food and traditional sandwiches. Everything is under $10 at Delhi. The Naan Fifty, which is $9.50, is either butter chicken or dhal with rice and naan and a salad. I have tried both, and both are aromatic and delicious. For those who miss the old Touch of Europe Deli that once stood on the spot, there are a couple of good sandwiches on croissants, and chili, as well. 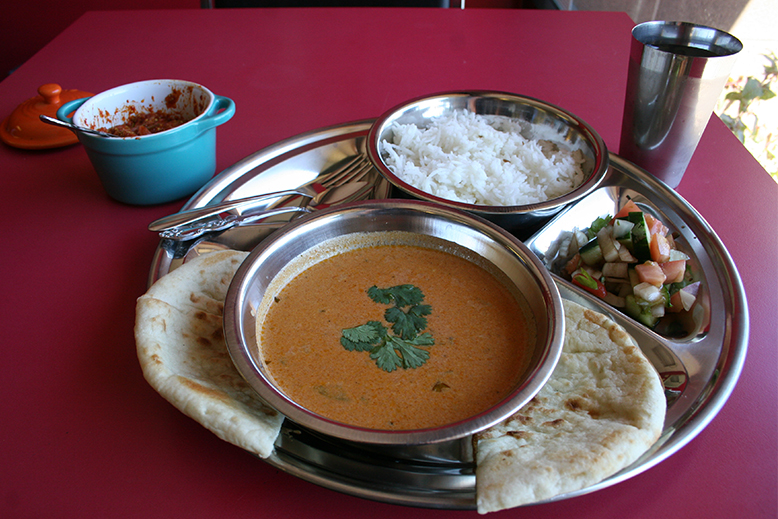 This is not to say that the new Delhi is the same as the old deli. Owners Baljeet (or Belle, as she likes to be called) and her partner Jason have crafted up a simple and original menu based on Belle’s many years working as a caterer on film sets. Belle and Jason met on a film set, and both spent many years in the industry before deciding to open Delhi. The walls of the restaurant are adorned with photos of the many celebrities they met on set.

Prominent, too, are images of Belle’s family. They hailed from a small village in the Punjab, Dholeta, before settling in Victoria in the 1970s. Thus, while the place is new, there is a sense of history attached to it. Belle and Jason’s love story is quite compelling. It involves international travel, escapes from arranged marriages, and all sorts of other highlights. The friendly atmosphere and easy manner of the two makes Delhi a commodious place to spend time.

The Naan Fifty arrives at the table in the familiar stainless steel tiffin trays that are so familiar to aficionados of Indian lunch dining. A curious pot of pickled lime and mango known as “achar” sits on the table beside. Achar is at once a pickle and a hot sauce. It is not intended for the mouths of the timorous, for its flavour belongs to a dimension all its own. Butter Chicken, meanwhile, is probably one of the most addictive substances on the planet. If possible, the Dhal is even more delicious. The lentils and subtle combinations of spice are accentuated not by the usual addition of spinach (that subcontinental staple green), but instead by kale—an addition that works well for me.

I was also pleased to see that Delhi is serving Second Crack Coffee. Here are two local businesses, supporting each other while making fresh food for the people of Victoria. Delhi is open Monday to Friday from 11:00am until 6:00pm and essentially serves the lunch set; but you can catch an early dinner there. It is affordable and tasty, so go check it out. 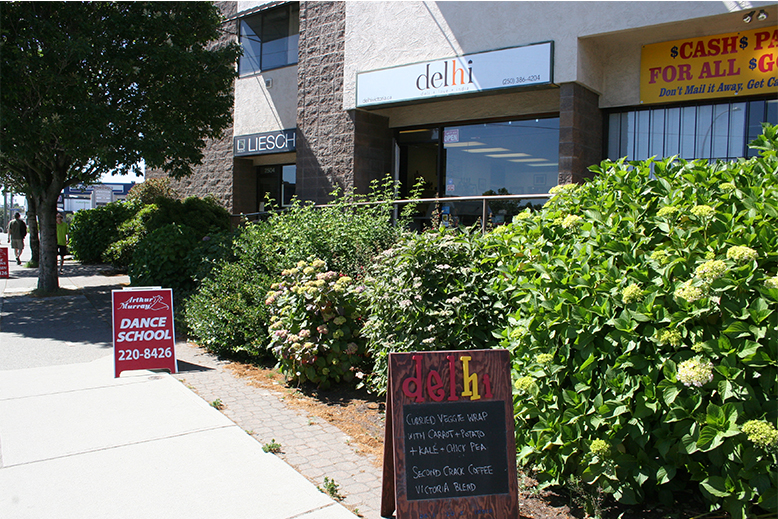 With Phase 2 beginning, restaurants and patios, tasting rooms and coffee shops are reopening. This is an ongoing process, with many changes, so we ...
Read More
This fresh colourful salad was one of four chicken dishes Dan Hayes, the London Chef, and Iain Rennie, Executive chef at the Westin Bear Mountain ...
Read More