Sitting at the bar in the new Belmiro’s Restaurant and Lounge, it’s easy to drink in the impressive view across the dining room to Douglas Street and the city lights beyond. Inside, the décor is a blend of modern chic and old-world classic and looks as if it could be in Vancouver, New York or San Francisco. The space is divided into an upper and lower level with distinct seating areas easily tied together with complementary design elements. The rich colour palate of cream, brown, black and metallics works well with the dark floors and tables. At the focal point, is an impressive looking wine cellar encased behind a floor-to-ceiling glass wall.

For experienced restaurant manager Bill Almeida, family has always been an important factor in his success. The name Belmiro’s is a nod to his Portuguese heritage and his paternal grandfather, whom he’s named after. He’s also never forgotten the impact a family atmosphere had on him when he was 15 years old and working at Brother’s Restaurant in Vancouver’s Gastown. Today, he continues to foster that same family-like atmosphere where everyone on the team is made to feel like an important member of the Belmiro’s family.  Bill, former manager of Pescatores and Prime Steakhouse, was given carte blanche in re-imagining the outdated space in the Executive House Hotel. “I wanted people to know there was a huge change in the works here,” he says. After consulting with Executive House General Manager Andrea Phillips and Operations Manager Jim Marchak, he set out to “bust it open” and create a space Victoria hadn’t seen before. “I think we’ve created one of the most elegant dining rooms in the city,” he says. The dining room seats 120 and is equally suited to intimate dining for two and larger parties of 50 – 100. 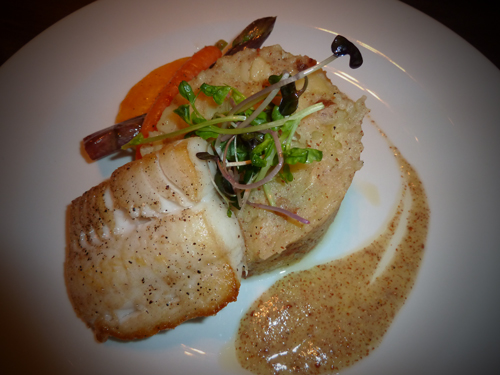 When it comes to food, Belmiro’s chef Tom Corless could be described as a control freak. “My passion is having complete control over the product we serve by making the majority of it ourselves in-house,” he says. “Everything starts with the best quality available and as much local as we can possibly source. After that it’s about respect for the food and an understanding of where it comes from.” He describes the menu as west coast cuisine with influences from Asian, Indian and Moroccan cultures.
To satisfy his standards, Corless dry-ages the rib eye roasts in-house, and produces his own bacon from pork belly that’s cured for 7 days and smoked for 4 hours. He custom cuts papparadelle and linguini noodles from lasagna sheets. And, he gets distinct smoky flavours from the kitchen’s mesquite-fired grill. (Stay tuned for the upcoming New York strip loin burgers custom ground from New York strip loin steak).

Belmiro’s opened their doors in June and has received positive feedback from locals and visitors. They’re open for breakfast and dinner and will be open for lunch starting this month.