Famoso Pizzeria was started in Edmonton by three Albertans—Justin Lussier, Jason Allard, and Christian Bullock—who now live in Vancouver. In 2005, and fresh out of Camosun College, Justin Lussier, traveled to Italy on holiday. He and his girlfriend discovered Neapolitan pizza in Naples at the Pizzeria Sorbilla. Shortly after Lussier’s discovery, he called his friends back home in Victoria and told them about this amazing pizza. Upon Lussier’s return to Canada, the threesome hatched the concept of Famoso Neapolitan Pizzeria and opened their first restaurant in Edmonton in 2007. The rest, as they say, is history. There are now fifteen Famoso Pizzerias across Canada with three more slated to open. 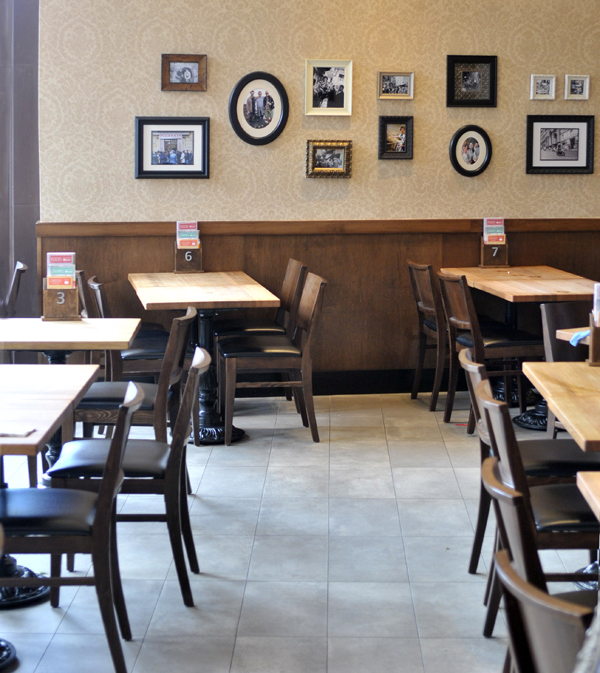 The interior of Famoso

Recently opened, the Victoria BC location is owned by Corey Arsenault (along with a few members of his extended family). While living in Edmonton and working in various restaurants, Cory tried Famoso’s pizzas and loved them. An old friend of his, John Carreiro, is the culinary manager and head chef at Famoso. So when Cory decided he wanted to move back to Victoria and settle down, he thought, what better way than opening his own Famoso? With the support of John Carreiro and the whole Famoso team, Corey has opened Victoria’s Famoso Pizzeria—a restaurant with a warm and fun atmosphere and a “fast casual” approach to service.

The focal point of the restaurant is the large, dome-shaped Morelloforni pizza oven. Although gas powered, it still performs in much the same way as a brick wood-fired oven. This oven is incredibly advanced, while being simple to use. It has separate heat controls for the bedplate and the upper dome, allowing the chef to make sure your pizza is perfect top to bottom. The oven’s gas flames come around the side of the bedplate and “lick” the pizza, giving it the expected burnt blisters of a Neapolitan pizza. And it heats up to 900°F and cooks a pizza in around 90 seconds!

At Famoso, you walk in, seat yourself, and then look through the menu. When you’re ready to order, no server comes to the table; you write your selections on the order pad provided on each table and take it to the service counter yourself. Although un-intutive for Victorians at first, it is catching on as it helps to keep the dinner at your speed. If you are in a rush, you can skip getting a table and order first; or, if you want a longer dinner, you can sit with your drink while you ponder what to order, order the starters to begin, and put in your order for the mains later. You’re in control. Servers bring out your food, and are always there to answer questions, take drink orders, and keep the restaurant running smoothly. 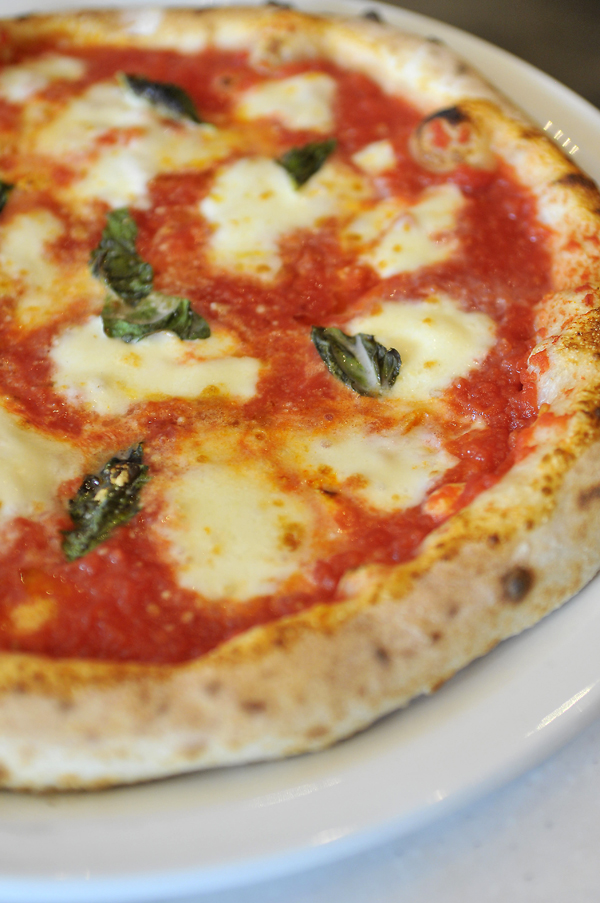 What sets Famoso’s pizza apart from the standard North American-style pizza—think big crusts, big and chunky toppings—is that the Neapolitan-style pizza is made with thin crusts that are not only crispy, but tender, and are only topped with a few high-quality toppings. Famoso uses a San Marzano tomato for the sauce. These tomatoes come from the volcanic plains area south of Mount Vesuvius in Italy and have a high mineral count with low acidity; this makes the tomatoes especially sweet when cooked. According to owner Corey Arsenault, “Famoso does not add anything to the tomatoes to make the sauce; it’s just pure stewed tomatoes. Famoso also uses fiordilatte mozzarella, also imported from Italy. Fiordilatte mozzarella is a very fresh cheese that comes in the shape and size of a squishy and moist softball. Everyday, the chefs squeeze the cheese through a special machine to make smaller curds for the pizzas.”

Famoso is known for its Neapolitan pizzas like the Margherita, which has only mozzarella, fresh basil, pecorino romano, and extra virgin olive oil. But they also serve their version of new world-style pizzas made on the Neapolitan crust. Their Sweet BBQ Chicken pizza has honey-smoked BBQ sauce, chicken, and two kinds of mozzarella, both fiordilatte and a smoked mozzarella. After baking, it is topped with diced tomatoes, slivered red onions, and cilantro.

The dessert menu is small, but filled with Italian goodness. Choose Nutella spread on hot Neapolitan pizza crust, folded into a calzone and cut into strips; or Dolce and Oven-Roasted Banana—coated in caramelized brown sugar and crushed pecans—with caramel sauce, and vanilla bean gelato.

Oregon, BC and Italy are well represented with wines by the glass or the bottle. There are also specialty cocktails and beers, and an interesting assortment of non-alcoholic drinks. I recommend the Gelato Float—you get to choose the flavour of the gelato and the type of soda! Whether you want salted caramel dark chocolate gelato floated upon a raspberry Italian soda, or a blood orange creamsicle gelato floated on root beer, Famoso will do it!

The article on L’Apéro in the May|June issue should have stated Chef Andrea Maiolo staged at The Courtney Room and Zambri’s and that he held the ...
Read More
May|June issue on the stands. Read ...
Read More
VICTORIA – It’s time to get tickets for FarmFolkCityFolk’s 14th annual Feast of Fields on Vancouver Island, hosted by Marley Farm in ...
Read More