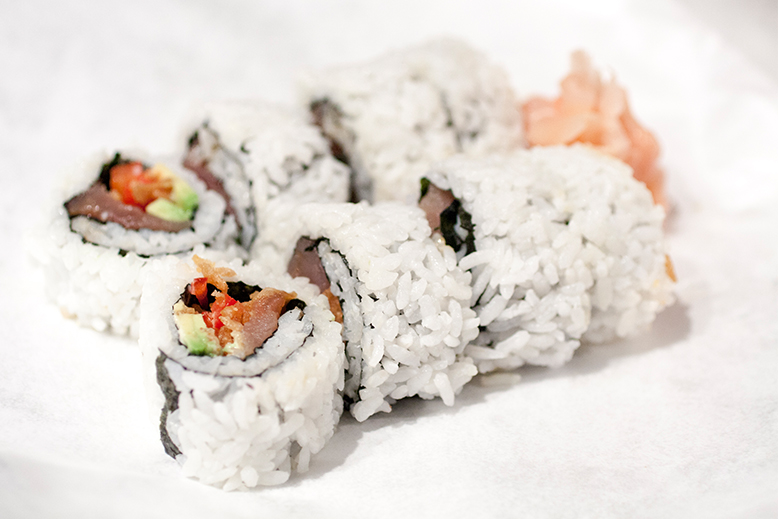 Creating a vibrant and successful public market from scratch is a big task, and it’s no surprise that the Victoria Public Market in the Hudson building had its share of construction delays, business turnovers. With Chinatown nearby, a couple of smaller groceries and rumours of a large supermarket moving in, Victorians didn’t quite buy into the VPM’s concept of a year-round, enclosed farmers market. Despite this, many of the shops have solidified their positions over the past year, and the VPM seems to be well on its way to being the modern gourmet version of a downtown food court.

One of the best examples of this is Fish & Rice, Maki Roll, a non-sushi sushi spot that opened up in December 2014. Owner and Vancouver Island Salt “rock star” Andrew Shepard operated Island Spice Trading in the same location for over a year before deciding to revamp the space. “The salt company had worked with the Victoria Downtown Public Market Society (VDPMS) who opened the market, we’d worked with them for years and we just sort of didn’t want to be left out of a good time,” says Andrew. “It was cool, man! For six months, it killed it, and then it just, public perception and really the new additions to the place sort of swung in another direction.”

The new restaurant is based on the kind of walk-up sushi places Andrew had seen in Australia, with little Asian influence beyond the ingredients. “You’d go up, order whatever and they wouldn’t even cut it, you’d eat it like a sub.” In a city inundated with Japanese food already, Rock’n Rolls on Fisherman’s Wharf is no longer alone in their focus on alternative and fusion styles. Andrew and his new head chef, fine dining pro Dan Dumitru, are keeping it unique, West coast, and screamingly fresh. “Everything is made to order, everything is super quick and affordable,” says Andrew. “We’re really fortunate to have Cowichan Bay Seafood here, so we think we have the freshest seafood of any maki shop in town. We buy one piece at a time, you will not find fresher tuna than from our shop, that’s like our calling card.” 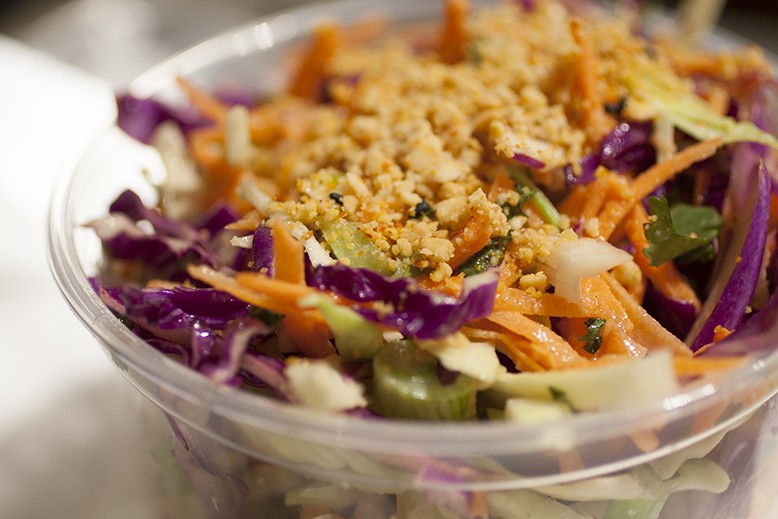 The Maki Shop’s menu features a few classics with a twist, like tuna and avocado adulterated with crispy wonton and ponzu sauce, and a salmon roll packed full of veggies and pickled ginger aioli. But it also branches out into spicy ceviche with sweet potato, a lineup of international salads, and the intimidating Randrew Roll involving prime rib, blue cheese and onion jam. “I think we got a North American twist on what we’re doing, I think it’s refreshing and it’s different,” says Andrew. “We like to think of it as a sandwich shop but we use rice and seaweed instead of bread.” Beyond seafood from Cowichan Bay, much of the shop’s ingredients come from the other stores inside the market, from Salt Spring Island Cheese to Roast. “Dan’s also got a setup with Trigo Foods, we use all their produce here,” says Andrew. “They focus on local and they’re a local small business as well.”

All of Fish & Rice’s menu can be ordered for takeout and is quick to assemble, making it perfect for a summertime lunch picnic. They’ve also been working on rolling out catering options and delivery for downtown businesses. Andrew is optimistic. “I think this is gonna be an exciting summer for the market.”

The First Annual Vancouver International Tequila Expo (VITE) will take place on Saturday, May 12, 2012 at the Vancouver Convention Centre East. It ...
Read More