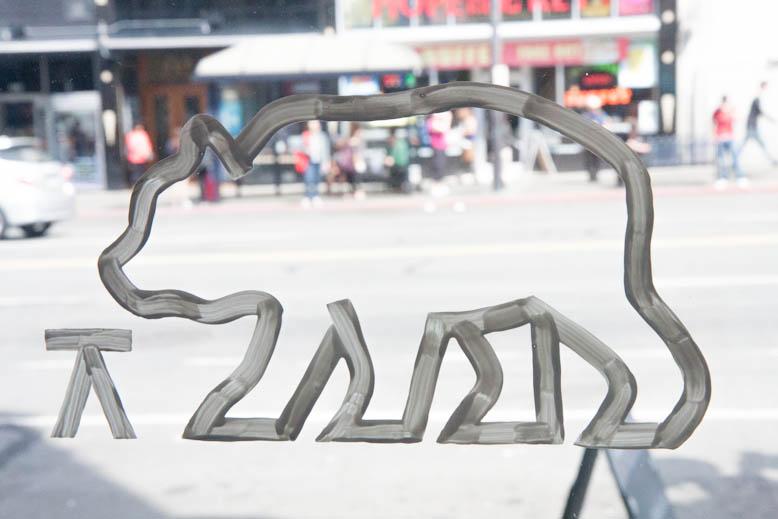 The 1300 block of Douglas is a miniature food desert. With convenience stores on each end and three fast food franchises in a row, buffet and bubble tea stalwarts Hope Key have only one ally. Thankfully, Friends of Bears have some ursine backup.

Colin Webster and Claudia Bergeron’s Friends of Bears is a blue-suited, unassuming café on Douglas Street, offering honest and hand-crafted sandwiches, soups, and salads for downtown’s bustling lunch crowds. Formerly known as the Lunch Kit, it was bought by the pair in May 2013 and re-imagined by local design shop Talkie that fall. I walk by it nearly every day, and over the past year I’ve been glad to see the lunch rush growing from a trickle to a torrent.

“Our specialty is sandwiches I would say,” says Claudia, the Montrealer and self-taught cook who heads the kitchen. I’m inclined to agree. My favourite order is “The Crack,”a roast beef special with crispy onions, melted aged cheddar and spinach—it once made my vegetarian friend abandon his principles, and the warm sourdough it’s served on certainly helps. “We’ve been looking for the perfect bread for a long time and we finally found it,” says Claudia. “We can get it on the way to work, so it’s fresh and soft all day. We couldn’t get all the bread we need from one bakery so we go to three, but it’s worth it.” 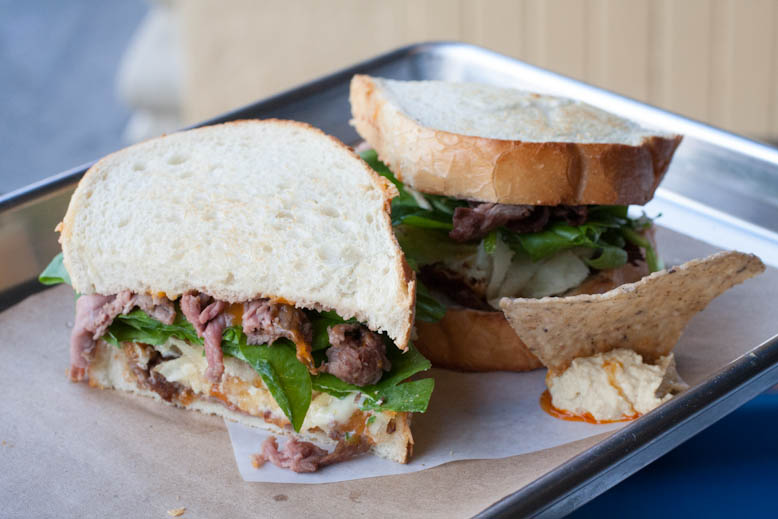 The café struggled at first, especially under its previous guise as the Lunch Kit. Some community involvement helped stabilize things as Claudia hammered out the menu; Melissa and John from PiCNiC did all their cooking in the space for a year while their second location was constructed. “It worked really well, helped us out in the beginning with them paying rent and they’re amazing people too,” says Colin. Since the redesign things have been slowly picking up as they continue to test new menu items. “Truly we just listen to the customer, and if something sells we keep it on, and otherwise we assume people don’t like it.”

On top of the hot food served at the café, friendly neighbourhood bears can also order catered lunches, with a few big Victoria corporations already on board. “We go regularly to Maximus and BC Ferries,” says Colin. “Also CIBC Wood Gundy, those are probably the three most regular.” If you’re considering pitching the idea to your boss, bring her one of the cold wraps or sandwiches from the “entirely self-serving” cooler—they’re the same recipes and ingredients as the catering menu. 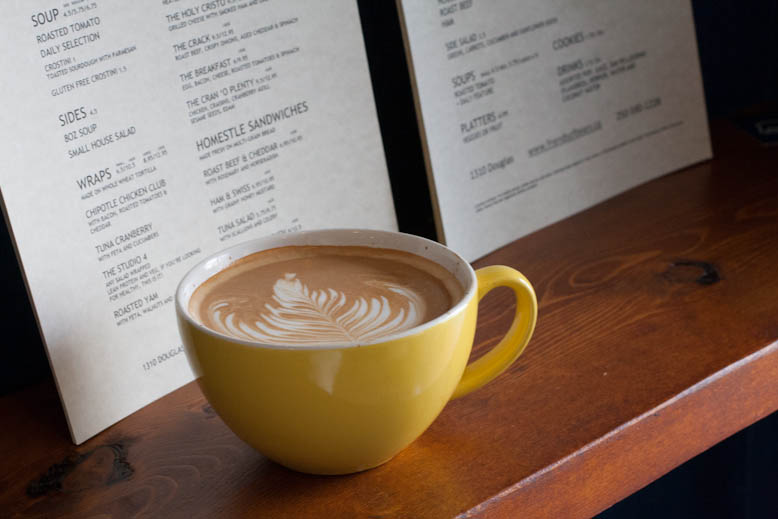 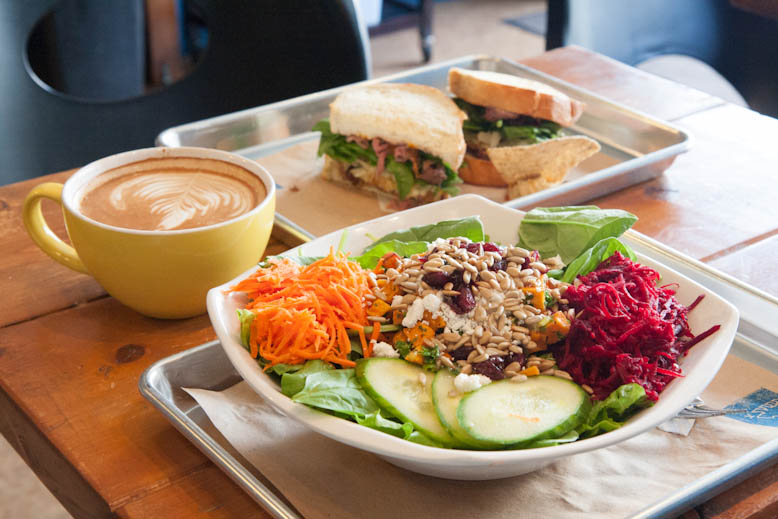 As I often find when interviewing Victoria business owners, Colin and Claudia are more than meet the eye. The duo, partners in both business and life, met while playing in a nationally-funded orchestra in Hamilton, Ontario. Though Colin holds a degree in percussion from the University of Toronto and Claudia in violin from Montreal, they soon decided the life wasn’t for them. “We basically decided we didn’t want to continue being professional musicians anymore,” says Colin. “So we went off to Asia for nearly a decade. We taught English and played in bands and orchestras and stuff.”

When it was time to come back to Canada, they moved to Toronto. “I felt like that was where I would go home to, but after a few years there I was like, this is not where I wanna be.” Both he and Claudia had always wanted to live in BC, so it was an easy call. “We went snowboarding in Revelstoke and did the interior and as soon as we hit Victoria it was like, okay.” Claudia is a certified dive master and Colin loves surfing, making Victoria a perfect spot. “It’s like my goldilocks. It blows my mind how awesome this city is for the size it is; the music, the art scene, the things that are going on here are really amazing. There’s so much awesomeness here.” 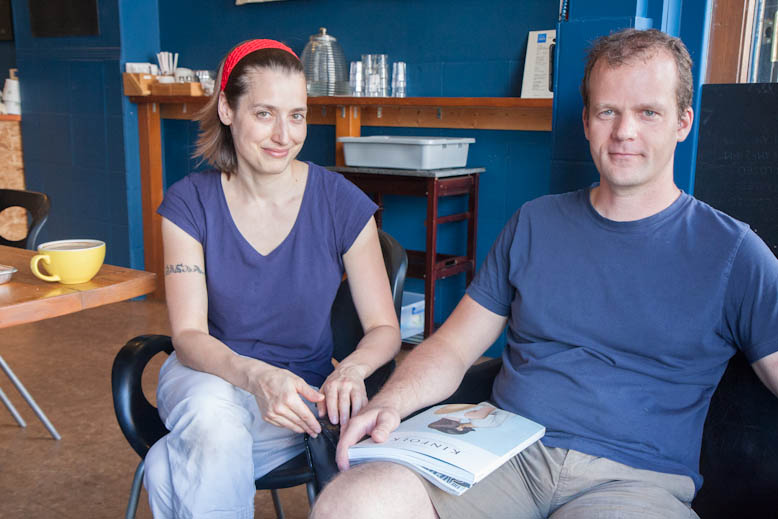 At the core of Friends of Bears is the dream of being a community hub, which is clear from the posters and banners hanging inside. “It’s sort of a private club, like the Water Buffalo Club from the Flintstones, or the Stonecutter Club from the Simpsons back in the day,” says Colin, laughing. “And that’s kind of the spirit of the place.” There’s even a nice reflection in the fact that the Oddfellows Hall is right across the street. Colin and Claudia hope to host future events like dinners or concerts, and may even revive the Django Rheinhardt cover act they gigged with in Japan. Who knows; a few more spots like Friends of Bears, and this block of Douglas might just feel like Victoria again.

July|August issue on the stands. Read ...
Read More
EAT is looking for Victoria-based food writers for our website. A knowledge of food and a familiarity with Victoria food scene is important. Camera ...
Read More