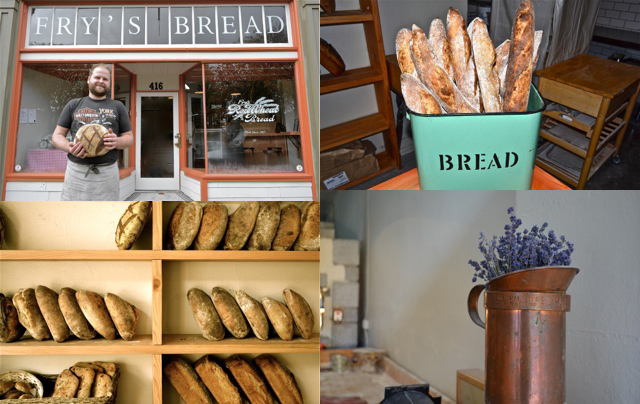 While waiting for the flour that has made its way onto his apron to be dusted off, and watching the enjoyment of a fresh pretzel being eaten for breakfast, it is clear that Byron Fry is living and breathing his new bakery.

The small shop that opened its doors less than three weeks ago has a warm presence to it. With clean white walls, an open concept wood-fire oven, and rustic wood shelving surrounded by autumn coloured flowers, Fry’s Bakery is reminiscent of a corner shop one would find in a farming community of years past. The smell of fresh bread and croissants coupled with the ease at which customers are greeted, add to the overall inviting atmosphere of this new Victorian, soon to be, staple.

Byron Fry, the man behind the bakery has had his hands deep in dough for over four years. Despite being part of a long line of bakers on both sides of his family, it wasn’t until after beginning to bake that Fry learnt of his great, great grandfather’s Victorian Bakery Fry’s Bakery, which was located across the street from his new shop. Although primarily self-taught, through learning curves and burnt loaves, Fry bounced around different bakeries learning the production side of baking. However, Fry ultimately realized that working for places that did not produce his desired quality of bread, was not what he had set out to accomplish.

Through the generosity of his parents, who let him bake out of the bottom of their Metchosin home, Fry began to create bread that was rich in organic grains and heirloom wheat. Since relocating to a store with more space, his repertoire of baked goods now includes croissants, local lamb sausage rolls and pretzels, alongside Cowichan Pasta, free range Metchosin and Saanich eggs, and of course new types of bread. Today, the daily baked loaves include styles such as those with 100% rye, flax-rye and sesame seeds, honey, raisins and cinnamon, and of course their two staples: Pain Rustique (30% wholegrain) and Whole Wheat Country (Red Fife, rye, wholemeal). A loaf sells for ten dollars, as Fry has baked the bread with the consideration of those customers that want to purchase a loaf or two a week.

Since Fry has committed to using high quality ingredients that are utilized in a traditional style of extended fermentation, the gluten is more readily broken down compared to more conventional baking operations. In large grocery stores where the mass production of bread sees great amounts of yeast used to increase rising times, the gluten and nutrients often become indigestible. With gluten sensitivities now more common in society, Fry’s bread is an option for the carbohydrate lover that resides in most of us. He explains how his bakery has quickly gained a reputation as gluten-free, despite having never baked anything that lives up to the description. This misunderstood concept lays in the fact that many people, aside from those with celiac disease, do not feel the common sickness in their stomachs that is oft times associated with supermarket breads.

The ambitions of Byron Fry for his new bakery are simple, “ have consistent value, a really good quality product and make it comfortable for the people that come by.” The relationship with the immediate community is what Fry hopes to first develop. Eventually he aspires to have his bakery become a destination spot for Victorians who live further away yet can still appreciate high quality baking from a local business. At this point, Fry’s Bakery is in the process of learning what it is the locals need from them, and how they can bake the bread that they want.

July|August issue on the stands. Read ...
Read More
Good For You:   Though granola is widely perceived as a nutritious food, it is often anything but a health-enhancing addition to the diet. Many ...
Read More