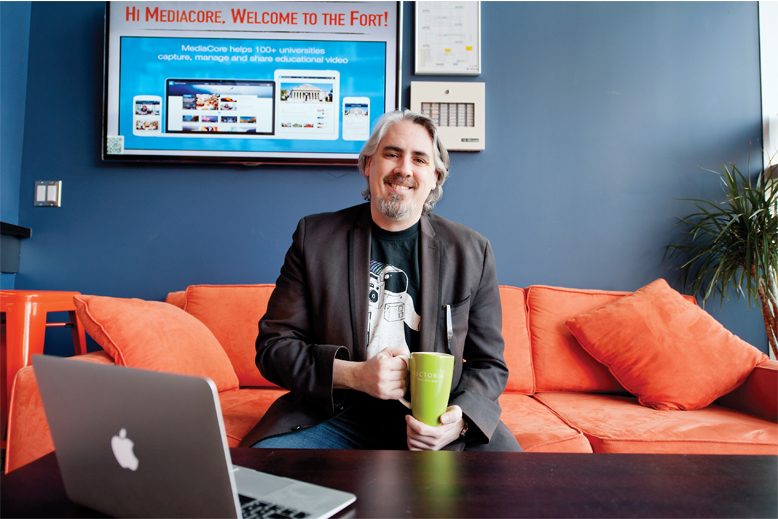 The reign of Fabulous Fort Street continues with the opening of Ground Control Café in VIATeC’s Fort Tectoria headquarters. With the support of Victoria’s fastest growing industry, a rocket ship themed space and an emphasis on supporting local craft, it’s almost too easy to conclude Ground Control is poised for liftoff.

“For the first week and a half we were just giving things away for free because we didn’t have our business license yet. We wanted to start developing the customer base,” says Øvstaas. “In the end, pulling it together while we move forward was better because then the community has some input into what they would like to see in here.”

So far, Tectoria tenants and locals have been fawning over the 2% Jazz coffee and Fort Street neighbour Crust Bakery will supply the baked goods—exclusive to Ground Control.

“We’re not looking to compete with everyone else. Fort Tectoria wants to support local business whenever possible. We have a huge space at our disposable,” says Kendrick.

Dan Gunn, the CEO of VIATeC has become an almond mylk convert and now has a drink in his name, the Shot Gunn (that’s two shots of espresso, salted caramel and steamed almond mylk).

Gunn met Øvstaas working at local music festivals. Together, they made Ground Control a reality. “Local techies love supporting local innovators and entrepreneurs and this includes restaurateurs, café owners and brew masters. Not only are tech workers and leaders frequent customers, but they are also often investors,” says Gunn.

Securing a liquor license is the next goal for Øvstaas and Kendrick. “VIATeC and Phillips Brewing have always had a close relationship. They make a special beer just for us called Ctrl, Malt, Del. We’ll be the first people to have it on tap,” says Øvstaas. The future also includes the addition of a patio and an expanded menu.

The cultural connection between food and the technology sector is not a new revelation, but Fort Tectoria sees it as more than a trend. “VIATeC focuses a lot of effort on attracting new skilled talent to Victoria and our local food, beer, coffee, food truck and live music scene are vital selling points,” says Gunn, who just returned from recruiting at SXSW. “Ninety per cent of our pitch is related to lifestyle which includes our foodie culture.”

Ground Control has become somewhat of a reception desk for new visitors to Fort Tectoria and in many ways, gives passersby the social permission to invite themselves in.

And for the name?

“Dan came up with Ground Control, but we breezed right past it. Later that night, I clued in. I called him and said, ‘I just got Ground Control!’” says Øvstaas. “Plus, we love David Bowie!” Major Tom approves.