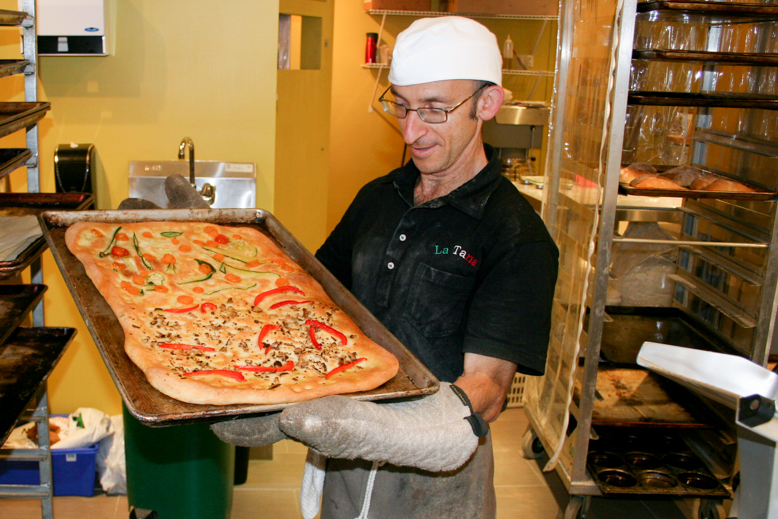 Claudio Costi, once a scientist, now runs a focacceria e panetteria on Pandora Street, conveniently for me it is across from my wood shop. For those of you unfamiliar with the concept, it works like this: in Northern Italy, people buy bread by weight. When a person comes in looking for focaccia, they specify whether they would like a large piece or a small piece, and they are charged for the amount they take. Costi knows this is a novel concept for Victorians used to paying a fixed price for snacks, but he thinks it will catch on. After all, people need only order as much as they feel like eating.

In addition to the focaccia, which is absolutely scrumptious, Costi makes panzerotti and various other Italian breads. What is a Panzerotto? I grew up eating them, and for me they were a childhood addiction, but to people living outside of Southern Italy (or, bizarrely, Toronto, where I’m from) the dish is almost unknown. A panzerotto is like a calzone, Costi explains; a folded piece of dough with filling inside (what we often call a pizza pocket here in the Americas). Yet, unlike a calzone, which is made with a pizza-like crust, the panzerotto is made with a butter crust, and can thus be cooked in a pan without the shell browning unevenly or producing areas that bubble or burn. I highly suggest you go and eat one as soon as possible.

Costi, originally from the North of Italy, travels back to Italy often and visits bakers across the country to pick up new dishes and techniques. As much as he wants to sell light lunches and snacks to people, he always wants to educate and delight his customers. He takes some time to show me how he makes grissini, baked bread sticks consisting of a dough that is stretched out by spinning (like a skip rope in the air) as opposed to being rolled. The grissini are baked in a special pan that looks like a corrugated roof. They are, he says, an excellent medium for cheese tasting, or as a small bite on the table to open the stomach up before a proper meal.

There is a great deal of charm in Costi’s sincerity about his work. He spends half his day in his bakery and the other half riding about on his bicycle, delivering bread to his customers via pedal power. Costi’s approach to business and craft seems similar to that of many who land here in Victoria; a simplicity of living combined with a degree of eccentric ingenuity. This, I think, is part of what makes this city such a fun place to live. 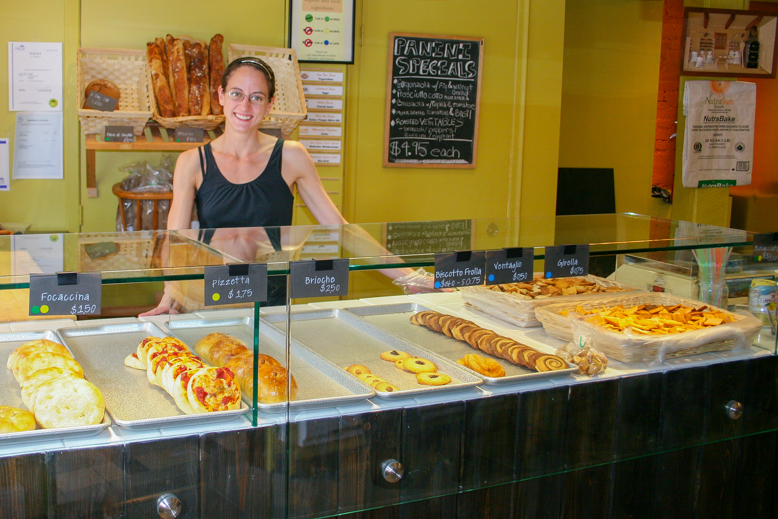 I was at La Tana just before lunch and already there was a good crowd rolling in to get the fresh sandwiches that Costi makes, all while he runs back and forth between counter and oven, delivering fresh focaccia straight from the oven. On top of my much needed panzerotto hit, I tried a square of gorgonzola focaccia. It was light and chewy, with just a slight crunch. Costi explains that because he uses only local flour, it is not exactly like the focaccia one finds in Milan, but I don’t see why this matters — it’s in this moment of hybridity between the local and the exotic that magic happens