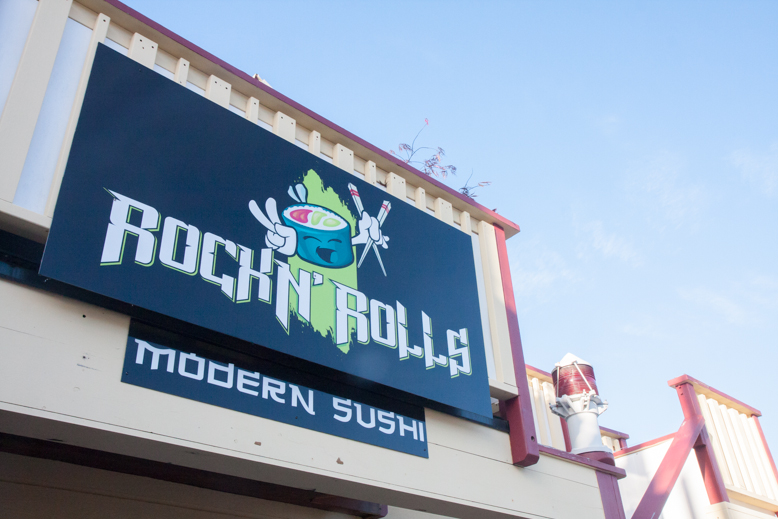 I challenge you to find a Victorian who hasn’t taken a date to Fisherman’s Wharf. With the cute yet carnivorous seals and the availability of mini-donuts, it’s obvious why both cruise ship tourists and local romantics find themselves here. It’s easy to imagine the two of you moving into one of the charming floathomes and living a life of culinary bliss, but unlike Rockn’ Rolls Chef Sabrina Reis and her partner Ryan Lane, most of us stop short of calling our real estate agents.

“We saw this house for sale and knew there was a live/work zoning, so we seized the opportunity,” Sabrina told me. “I’ve been a chef for ten years in Ontario so I thought it was time.” The snowbound winters had become a little much for her Brazilian blood, so they decided to spend the rest of the season on the West coast and see where it took them. Now, only two months into operation, Rockn’ Rolls is a welcome addition to the bustling wharf. Among two fish and chip shops, a Mexican spot, an ice cream shop and a grill, Sabrina serves wholesome smoothies and her own brand of fresh, creative Brazilian Japanese fusion. “I think for a starter business it’s doing well,” she said. “We have a lot of repeating customers, they like what we’re doing.” 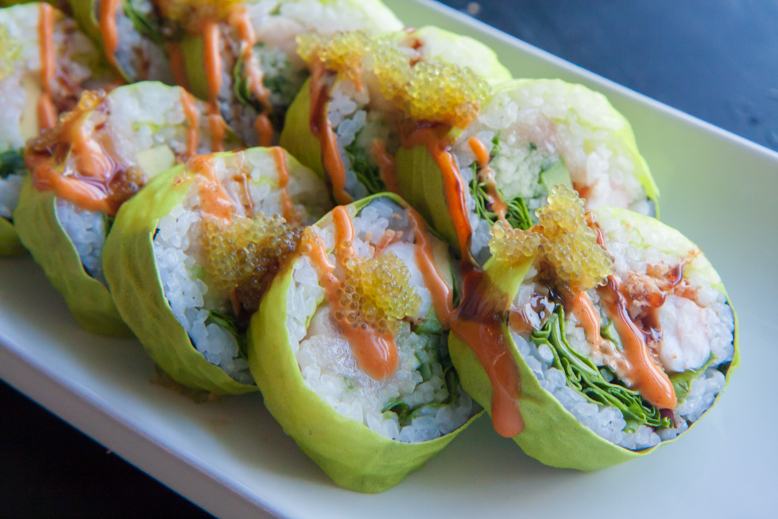 The untraditional nature of Sabrina’s sushi made it less daunting for her to open a Japanese restaurant on the sushi-hungry West coast. Her rolls feature everything from pico de gallo on the Albacore Heaven, to peri-peri sauce on the Rockn’ Roll. “The pico de gallo adds a nice spiciness to it, and I like the creaminess of the avocado with the flavour of the crab and crispness of the onions.” She describes her style as modern fusion, incorporating elements like Brazilian spices and curry sauces.

Of course, the fish is what makes or breaks sushi, and being right next to Victoria’s tiny version of Tsukiji makes it easy to get it as fresh as can be. Rockn’ Rolls stocks of tuna and salmon come right off the dock, either from the fishermen directly or from Finest at Sea. “Lately some of the fisherman have started coming by more often to let us know if they have some extras,” said Sabrina. “They have a few and I choose the one I want. Very nice oil content, I’m very happy with them, very nice and buttery.” 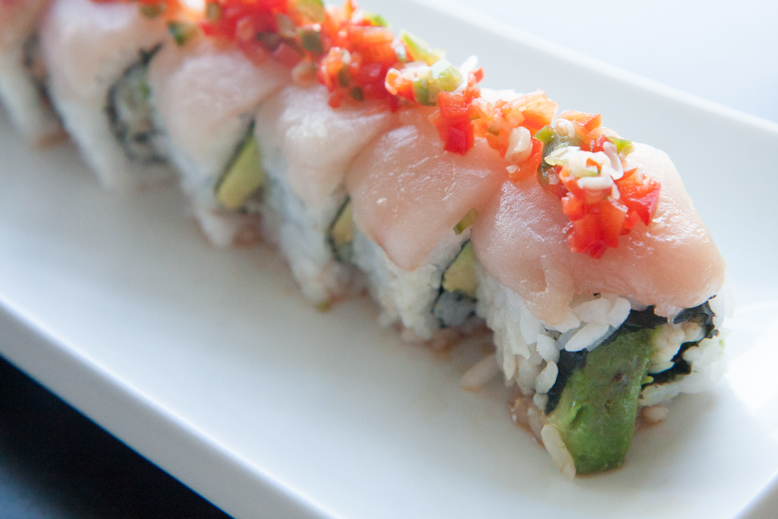 Selecting the fish herself also lets Sabrina make sure the catch is, as she puts it, “guilt-free.” Rockn’ Rolls is the only sushi place in Victoria that is 100% committed to sustainable fishing, ensuring that anything you order isn’t coming from at-risk populations. Though I’ll miss my favourite roll, unagi (BBQ eel), it’s a good reminder that I should be avoiding it. Besides, Sabrina has a handy alternative. “We’ll get black cod and ling cod and I’ll barbeque that as “fauxnagi” because it’s on the red list. I don’t use bluefin or yellowfin tuna either.”

Unlike most sushi restaurants who might offer all varieties of fish year-round, Sabrina’s menu adapts naturally to the seasons. “It depends what people like, what the weather is like, what’s in season. For summertime I’m using the sockeye, it’s seasonal and there’s a lot of it. The tuna as well, some halibut, usually cucumbers and peppers. I’m new to Victoria so I’m still figuring out what the farmers grow here and making the connections.” 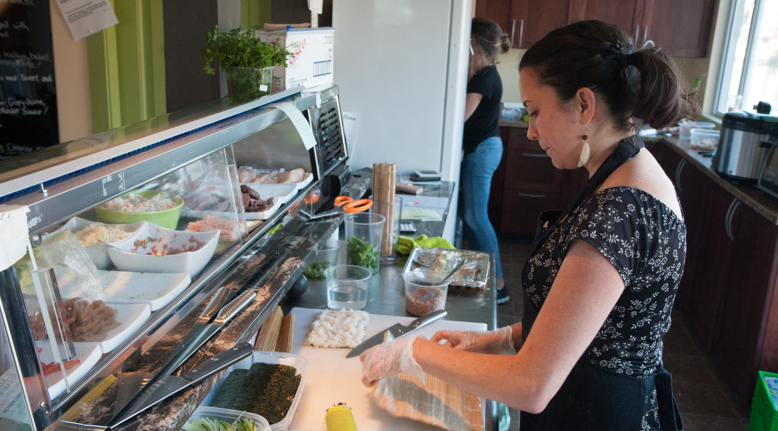 It’s certainly a pleasure to see a riff on the classics, though Sabrina still has plenty of respect for the traditional. The menu doesn’t yet feature traditional nigiri or sashimi style sushi; though they might seem less complex than maki (rolls), their subtlety takes extra preparation. “It’s a little bit on the slower side. Maybe in the future; I’m the only person that can make sushi at the moment, so whenever I’m able to find someone qualified to do what I’m doing I can offer more.” I’m holding out for an omakase session, Hidekazu Tojo-style.

Sabrina has yet to visit Japan, but it’s high on her bucket list. “I can’t wait to go to,” she said, smiling. “The chefs train for years and years. It’s an art in Japan, one you inherit.” And yes, she’s seen Jiro Dreams of Sushi. “It’s beautiful.” 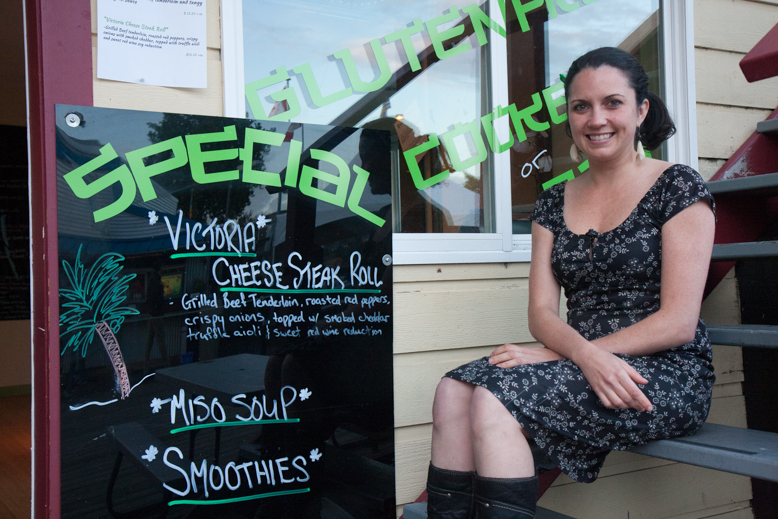 Dan Hayes has fish cred. He earned that cred by working for some of the top seafood chefs (Rick Stein, Mitchell Tonks) in the UK— gutting, scaling, ...
Read More