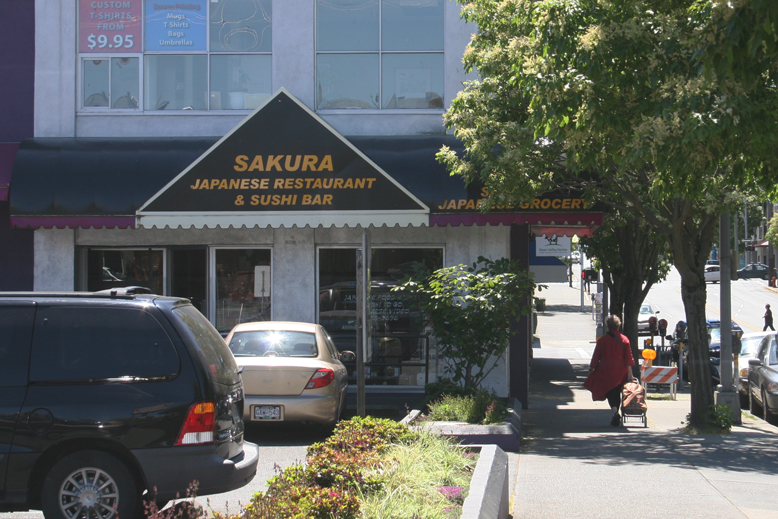 After emigrating from Japan to Victoria, Sakura opened her eponymous restaurant and grocery in 1998.  She still works behind the counter today, along with a flurry of assistants who each have particular specialties and roles in the business.  I try to get the lowdown from one, Eriko, as she is making up a series of California rolls.

“I make the sushi,” says Eriko, “and Sakura also makes the sushi.  That girl, the pretty one, works at the cash and sometimes cooks.  That other one, the short pretty one, she makes the tempura and the soup … sometimes the sushi … mostly the noodles.”  However the duties are arranged at Sakura’s restaurant, the result is a delicious mix of mix of Japanese and Japanese/American staples.

Beyond the sushi and tempura, there are bento boxes, udon soups, and generous plates of yaki soba.  I ask Eriko to what extent, after 17 years, the place is recognizable to Japanese visitors as a familiar dining experience.  In some ways it is and in some ways it is not, she tells me.  Japanese people do come in, homesick for their own cooking, and the restaurant satisfies them, but at the same time there are always concessions that have to be made to Western tastes.

For example, she explains, before she came to Canada she had never seen nor heard of a California roll, or imagined that the rice could be rolled on the outside of the seaweed.  Yet, she admits, California rolls can be pretty delicious—they certainly are at Sakura.

We chat on like this about cultural hybridity for a while.  We talk about how strange cheeseburgers are in Japan.  Authenticity and deliciousness spiral around each other like two mesmerized fish, and sometimes one is more important and sometimes it is the other.  Sakura is clearly built upon a certain insider’s love for Japan, but there is nothing intimidating about this for outsiders.  All sorts of people are coming into the restaurant and ordering up their favourites like experts.  A pleasant and cordial glow emanates out from behind the counter when patrons approach.

Beyond the dining area, there is a Japanese grocery providing dry and frozen packets of things.  Many of these things are still a source of charming mystery to me.  I ought to make it my project, I think as I look about the grocery, to open myself up to a few of these recipes.  I ought to research something and come back with a list so that I can pick through the plastic containers here with the same air of confident knowledge as the patron I am admiring in the next aisle.

Sakura, after all, is not only an eatery.  The grocery makes the place an embassy, too, if we choose it to be.  So why not take the opportunity to expand your culinary horizons?

Much of my jam making knowledge was passed down to me from my maternal grandmother, who preserved her jams the old way, with a layer of paraffin wax ...
Read More