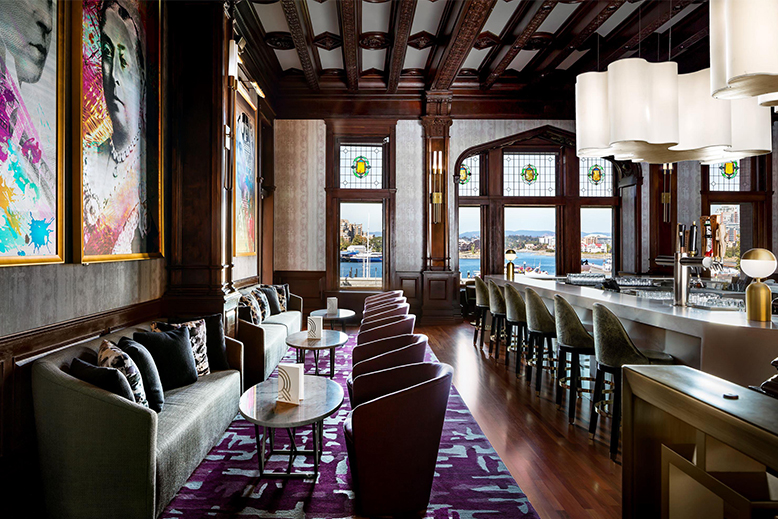 The Empress is one of Canada’s grande dames, the westernmost of the railway palaces that include Quebec City’s Chateau Frontenac and Alberta’s Chateau Lake Louise. She’s 108 years old. And she’s just undergone a whole lot more than a facelift—this Empress has shed her crinolines, put on her dancing shoes and waltzed into the 21st century.

Vancouver real estate titan Nat Bosa and his wife Flora purchased her for an undisclosed figure in 2014. The hotel’s value had been estimated at about $90 million (the average price of a Vancouver bungalow if the current trend holds).

Last spring marked the completion of phase one of a $30-million, seven-month-long restoration. “Not a renovation,” stresses a hotel spokesperson, “a restoration.”

Victoria traditionalists were more than upset. Noting the sudden disappearance of signature greenery and the massive interior construction, they let forth a squall of righteous outrage.

Particularly irksome to Victoria’s pukka sahib set, who rained furious letters on the local Times Colonist, was the closing of the Bengal Lounge, a room with a Bengal tiger skin splayed on the wall and an ersatz Indian buffet. Animal lovers decried the skin as a loathsome memento of an era in which killing a magnificent animal passed for masculinity. The controversy evaporated conveniently, when the tiger skin was allegedly stolen.

I was invited to inspect the premises. First off, the new landscaping is just fine. The landmark weeping sequoias and ivies had been neglected beyond repair. Replacing the old vines is Boston ivy. It it turns colour like autumn leaves.

The second phase of the restoration, begun this month, highlights an airy new lobby, renovated spa and another 229 guest rooms. It’s slated for completion next June, with total costs in the vicinity of $40 million.

Food and drink facilities were designed by San Francisco’s Puccini Group, whose way with casual opulence can be seen in ultra-luxe hotel properties including the Four Seasons Resort Orlando and the St. Regis Monarch Beach.

The Lobby Lounge, now a bright and cheerful space, offers the veddy English tea ritual at $75 per person. It serves 500,000 cups of tea and 120,000 scones annually. Pilgrims check off their bucket lists.

But the Empress, happily, is more than a tea party. 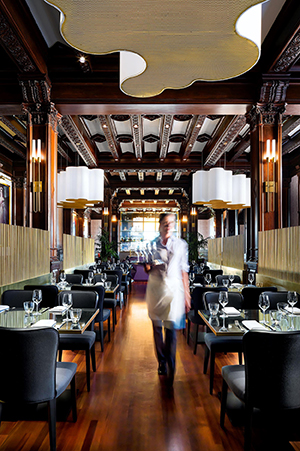 The signature restaurant is Q. Casual’s the word. Goodbye to the baronial Empress Room, in which powdered wigs and knee britches might have gone unnoticed. Gone are the plump drapes, upholstered walls and dress code. The new look, a riff on the Paris brasserie, brings intimacy to the 88-seat space.

Diners are advised to pay attention to the beams above. Their superlative look is an ingenious deception: They’re made of plaster and horsehair, and painted to resemble mahogany, perfectly.

The menu adheres to a regional trend: The purity of Pacific Northwest raw materials, showcasing the produce of Vancouver Island and the hotel’s own rooftop garden. Let the ingredients sing without distraction, runs the mantra.

Q’s stated objective is to be the best regional restaurant in the Pacific Northwest. But Vancouver and Seattle may not shudder.

The fare that emerges from the lauded hotel kitchen makes no apologies for its simplicity. Blow the horns: Here’s Pacific Northwest in the nude and flaunting it. Out, out, tournedos Rossini. Begone, sauces and spices. Begone, fusion devils.

The seafood bar menu ranges from Pacific Northwest oysters to a $70 seafood tower, with storeys of oysters, Dungeness crab, prawns, octopus and salmon, all from a kitchen famed for purchasing the best of everything.

Among desserts, the imaginative choice is fir-infused blackberry clafoutis with Salt Spring Island goat’s milk yogurt sorbet. But chocoholics may go off menu with the ultra-rich Empress Cake, a chocolate hazelnut layer cake with a chocolate crown.

Some of this works beautifully: Certainly the briny bivalves. Saltspring Island mussels are probably the finest in Canada. Tenderloin from Alberta’s Black Apron ranch with crispy fingerling potatoes might tempt a vegan back to meat-and-taters. But there’s a damning tendency to overcook here, and beautiful hunks of prime beef are seen on their way back to the kitchen.

Some dishes almost make it: The octopus poke (pronounced pok-ay and based on the Hawaiian raw fish salad) of marigold petals, tomato, taro chips and sea asparagus is masterful. But the giant Pacific octopus, BC’s great cephalopod, is ruined in a soy-based marinade. Note to kitchen: Please respect our octopus.

And some simply don’t: Tagliatelle is generously topped with Dungeness crab and mussels, but the noodles are tasteless and the crab generous in all but flavour. Q has talent and promise, but at this writing, has a marathon distance to go.

The wine list follows the Pacific Northwest bias with a laudable selection of BC wines by glass or bottle. The big names—Mission Hill, Blue Mountain, Tinhorn Creek, Laughing Stock—deliver the goods on a wine region still unknown to many foreigners. Of course, the Europeans are here, too: And how about the 1998 Tache Romanee-Conti at $20,000? But hey, this is a casual resto. It’s only décor.

Q Restaurant at The Empress

Superflux Cabana has opened upstairs at 804 Broughton St (the former location of The Livet). Featuring lots of Superflux beer and a menu that ...
Read More
January|February issue is on the stands! Pick up a copy, or read the digital version. Read ...
Read More
Come out to the July 8th Grand Opening of the newest farmers market on Vancouver Island. South Cowichan Farmers Market will be open Sundays 10am to ...
Read More