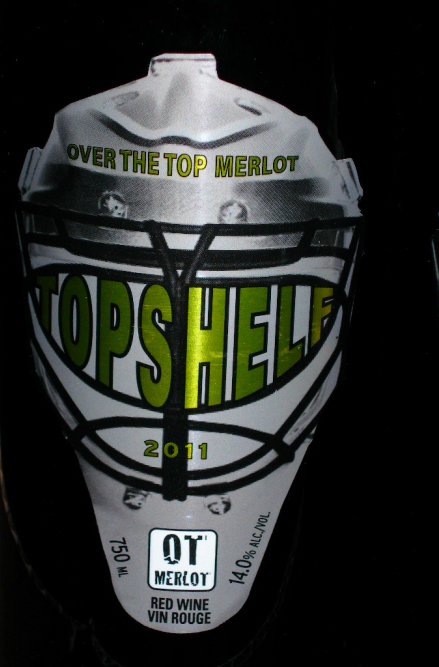 The lockout has finally come to an end, and it’s time for NHL hockey! Whether you’re watching at home, at friends’ or at your local pub, you’ll no doubt be reaching for a beverage. Sure, something with suds is an obvious choice, but why not expand your horizons, stick to those New Year’s resolutions and support your local industry – by making the switch to wine. Not just any wine mind you. The 2013 NHL season should be celebrated with a wine that possesses strength and finesse, is created from passion and dedication, and embodies the true spirit of hockey down to its very core. Reach for Topshelf – just one look at the label you’ll know you’ve got the right wine.

Topshelf Winery is a rookie in the Okanagan Valley, and is as entrenched in hockey as a winery can possibly be. Len and Myra Kwiatkowski, the visionaries behind this boutique operation, dedicate their wine to all sports enthusiasts and wine lovers. They are the quintessential hockey parents, who diligently drove their kids to every practice and attended every game, and whose passion for the sport and commitment to family resonated loudly when creating the identity of their brand. The trademark goalie mask logo of the winery was designed by their sons, one of whom is an NHL player currently training in Switzerland!

The couple emigrated west from Saskatchewan in the late nineties and raised their four children on the Sunshine Coast. When their children grew and began raising athletic kids of their own, Len and Myra decided to “retire” away from the coast and relocated to the beautiful Okanagan Valley in 2009. They settled on a slice of heaven in Kaleden, a small, picturesque town just south of Penticton that is lyrically referred to as ‘the Garden of Eden’. Captivated by their new passion for vines and wine, the couple purchased an agriculturally undeveloped 4.5 acre plot, and recruited the hardworking talents of their offspring to plant a mixture of Chardonnay, Pinot Gris and Merlot.

In keeping with their hands-on, family-style approach, Len tends to all aspects of the vineyard, while Myra lovingly crafts the wine. Topshelf’s first vintage, 2011, was released in the fall of last year with eye-catching monikers like Slap Shot Chardonnay, Point Shot Pinot Gris and Over the Top Merlot. The upcoming spring release will herald the addition of two more labels to the roster: Hat Trick Red, a blend of Merlot, Cabernet Franc and Malbec; and a rosé that has yet to be named. Approximately 1000 cases were produced, and the wines are available at signature VQA stores, select local restaurants and online at topshelfwine.ca.

If you’re staying at home for Hockey Night in Canada, try these sure-fire pairing suggestions. Enjoy the Slap Shot Chardonnay with fried chicken and maple cheese poutine fries.  Sounds deliciously patriotic, doesn’t it?  If you’d prefer something on the lighter side, a spinach salad with sun dried tomato dressing and avocado will suit the Point Shot Pinot Gris, and as for the OT Merlot, a good old-fashioned Margherita pizza will do the trick.

Regardless of where you celebrate in Canada this hockey season, you’re sure to hear our national anthem. When it’s over, instead of reaching for that beer, salute the best hockey country in the world with a glass of hockey inspired BC wine.

The article on L’Apéro in the May|June issue should have stated Chef Andrea Maiolo staged at The Courtney Room and Zambri’s and that he held the ...
Read More
May|June issue on the stands. Read ...
Read More
Ingredients: 3 lbs celery root 3 TBs olive oil 1/2 to 1 fresh red chile, finely chopped 3 garlic cloves 1 cup 1/2 and 1/2 cream salt and freshly ...
Read More