Watermark Beach Resort in Osoyoos has been around for a few years, and during that time has become known for the quality of chow put out by their wine bar. Recently, they welcomed Jonas Stadtländer as their new Executive Chef, who took the local-seasonal-sustainable menu to a whole new level.

Stadtländer is an unassuming individual who prefers to let his food speak for itself, but his résumé certainly does some shouting of its own. A Toronto native, Stadtländer grew up on a mixed farm in rural Ontario (his father is well-known chef Michael Stadtländer) where field-to-table was a way of life. He eventually went on to work at restaurants in Japan, Germany, Australia and Canada, including Germany’s Wielandshöhe restaurant and L’Atelier de Joël Robuchon in Tokyo. 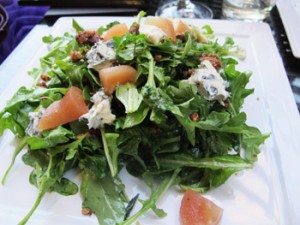 While the menu changes seasonally (sometimes weekly), certain favourites, like the truffled rocket salad, seem in it for the long haul. Local arugula gets more than a healthy dose of truffle vinaigrette, and then is topped with creamy local blue cheese, several hearty chunks of vanilla-poached pear, and crunchy candied walnuts. It’s a simple, but inspired dish that sings a happy harmony of summer and fall. 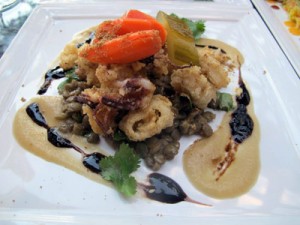 Classic dishes like calamari also get a bit of a rework, with Stadtländer’s international experience lending an exotic touch. Crunchy tubes of squid are seasoned with dukkah, a Middle Eastern blend of spices and nuts—in this case, ground almonds—and served over a lentil-cilantro salad made rich with sweet onion puree and balsamic glaze. The whole gets topped off with some crunchy carrots for colour and pop, and earns the dish serious snack cred.

One of the advantages of the outdoor kitchen (located right on the patio), is the large amount of open-air grilling and barbecue that goes on. Popular items like Okanagan sirloin come topped with caramelized onions and housemade rosemary barbecue sauce. I had mine with a side dish of sautéed mixed mushrooms that was large enough to be a main all by itself.

The wine list, as befitting a wine bar in the South Okanagan, focuses on local bottles, with almost 20 available by the glass, including standouts like Moon Curser’s Syrah and Laughing Stock’s Portfolio. Markups on bottle selections are extremely reasonable, and the library selection has some real gems, like Rustic Roots’ 2009 Plum (a personal favourite).

If you need a break from all the grape, however, not to worry. The wine bar stocks an impressive list of gin- and vodka-based martinis, as well as some after-dinner snifters.

Open daily throughout the fall for lunch and dinner.

With Phase 2 beginning, restaurants and patios, tasting rooms and coffee shops are reopening. This is an ongoing process, with many changes, so we ...
Read More
I spent the better part of last week up in the Okanagan – chatting with growers, walking the vineyards, and, naturally, a whole lot of tasting. ...
Read More