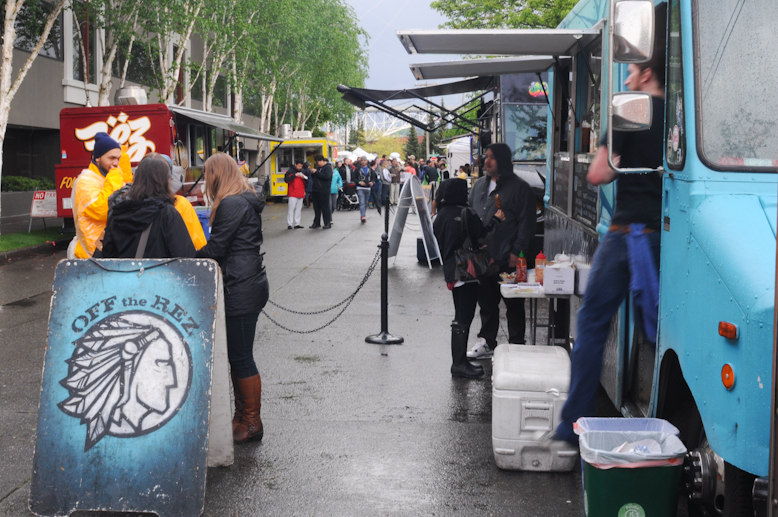 This past week I checked out the Mobile Food Rodeo in the bustling neighborhood of Fremont in Seattle, Washington. Now in its third year, the Mobile Food Rodeo is a two-day food and drink festival with an emphasis on the cultural phenomenon that is the food truck. Now the largest food truck festival in North America, the Mobile Food Rodeo is the brainchild of marketing producer and foodie Ryan Reiter. I caught up with Ryan to get some more info about the festival. Just three years ago the festival “started out with 25 trucks in a big vacant lot.” The Rodeo has clearly been a huge success in a short amount of time; this year featured “over 60 trucks, a taco truck challenge, and live entertainment.” Milling about the festival this year, I was surprised that it was so new; numbers were big, despite the weather, and there was a lot going on—a farmer’s market, beer gardens, live music, and a wrestling ring (more on that later).

If you were anywhere on the coast during the weekend of May 4th, you’ll know that it poured. No, it poured. As such, numbers were down at the Rodeo this year. Still, Ryan suggests that over 28,000 made their way to Fremont in 2014. In previous years, the Rodeo has seen over 30,000 attendees in one day, leading to some epic wait lines. The devoted foodie can pick up a VIF (Very Important Foodie) pass to jump the line 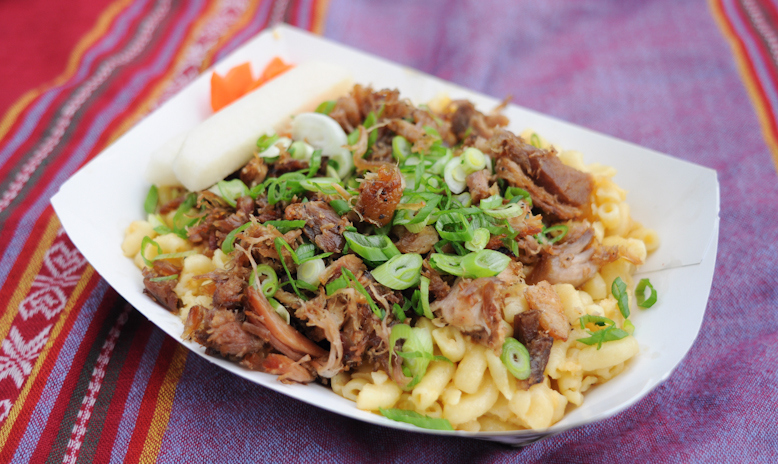 My girlfriend and I checked out the Rodeo on Sunday, May 4th, VIF passes in hand. Despite the rain, the streets were pretty crowded, and the lines were heavy. The VIF passes were great for that; flash your pass and you can pop to the front of the line. My girlfriend and I were kind of hoping that the VIF might give access to a “secret menu” or some kind of particular perk at each truck. I asked Ryan about this, and he indicated that next year the VIF passes will include further perks such as all you can eat and drink (!), and a three-hour window of just VIF member access to the entire festival.

The truck lineup this weekend was as varied and eclectic as one would expect; Hawaiian barbecue, Japanese hotdogs, Cajun, Thai, and—of course—Mexican were just a handful of the culinary styles and fusions offered over the weekend. As much as I love a good taco (seriously, I really love a good taco), I was interested in checking out trucks that might stray a bit from one’s expectations. It’s a shame that we weren’t able to try more trucks than we did, but our stomachs and raingear could only take so much in one afternoon.

The first truck we checked out was the Barking Frog Mobile Kitchen, a Seattle based truck offering a mix of entrees including a Colombia River Steelhead Sandwich, a Baby Kale and Mint Salad, and Grand Marnier Prawns. Naturally we opted for the Buttermilk Fried Frog Legs ($5.00). With creamy jalapeno white cheddar grits and a spring vegetable succotash, it made for a great first dish at the festival. The grits were about perfect—flavorful and creamy, and the jalapeno white cheddar added just enough of a kick. The frog legs themselves were hot and deliciously battered without feeling too heavy or greasy. The meat was sweet, very sweet, and managed to nicely hit that spot between over and under done. Outside of my girlfriend’s suggestion that the meat was a little “veiny” (they are frog legs after all), it was a pretty top drawer treat for five bucks. 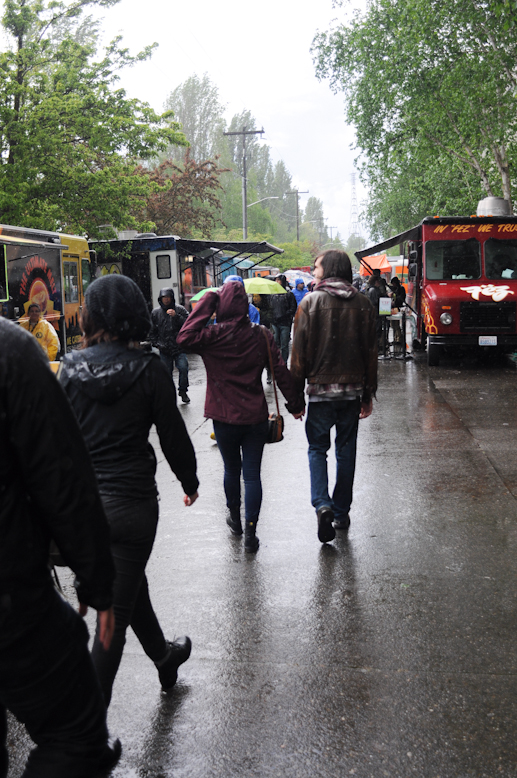 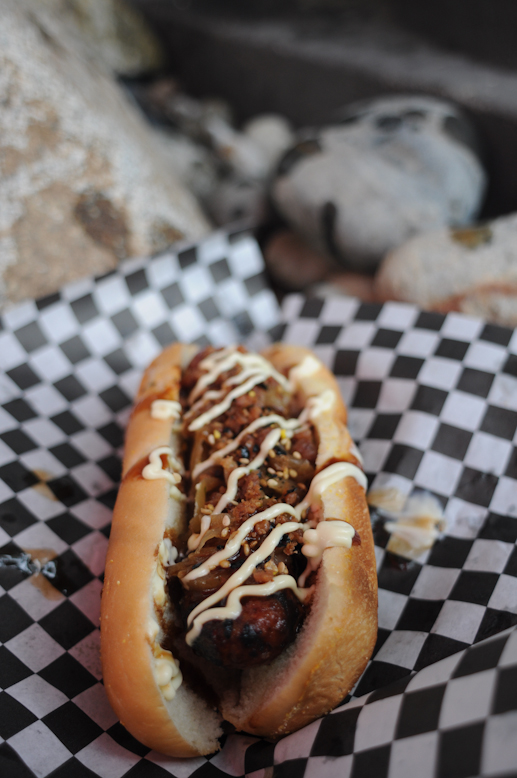 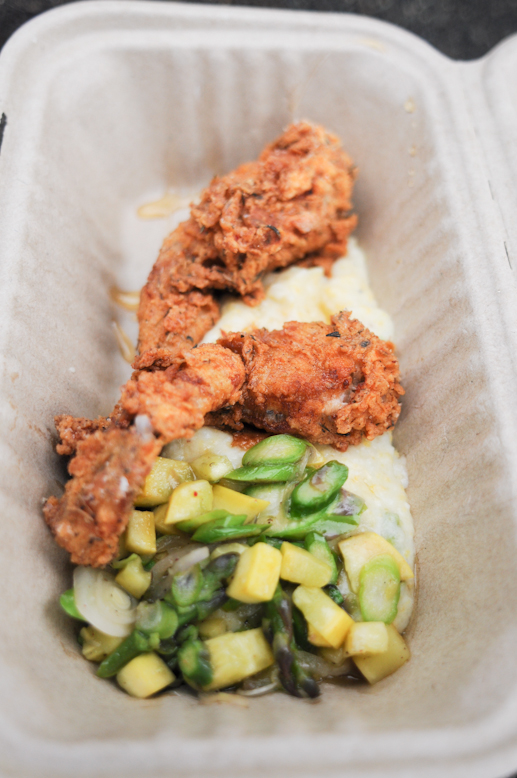 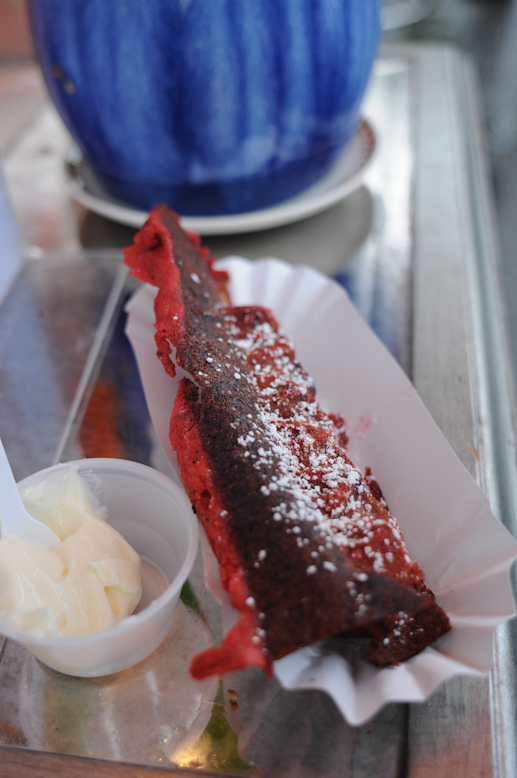 Next we checked out the How Pickle Got Out of a Jam truck, known for making stops in the Queen Anne and Ballard districts of Seattle. Touted as providing classic “Northwest comfort food,” we had our eye on the Serrano Pepper Mac’n’cheese with Pulled Pork ($9.00). Our portion was big—a little too big, to be honest. The pulled pork was good, tender with just the slightest bit of crispiness.  Pickled carrots and fresh green onions garnished the dish, which added a great bit of zest and freshness to an otherwise heavy and rich meal. While the macaroni had a nice bit of kick courtesy of the Serrano pepper, the noodles came off as a bit bland. Tasty, to be sure, but a smaller portion for around $6.00 along with a bit more “cheesiness” would have made this one a real winner.

By this time we were starting to get on the full side. Disappointed in our inability to gorge ourselves into oblivion, we came across the Anchorhead Coldbrew Coffee stand. Well-known across Seattle for their cold brewed and bottled coffee, we stopped by for a cool bottle’o’joe to reignite our appetites. The coffee was excellent. Full of dark, chocolaty espresso tones with just a hint of a floral finish, the coffee was just strong and bitter enough so as not to be “chuggable,” and provided an excellent intermission before our next food truck adventure. Highly recommended; be sure to check these guys out the next time you’re in Seattle.

By this time the rain had really started to pick up, and the streets began to empty. Unfortunately our VIF passes became increasingly less valuable—there’s not much use jumping to the front of the line if there’s no line at all, but the organizers can hardly be blamed for the weather. 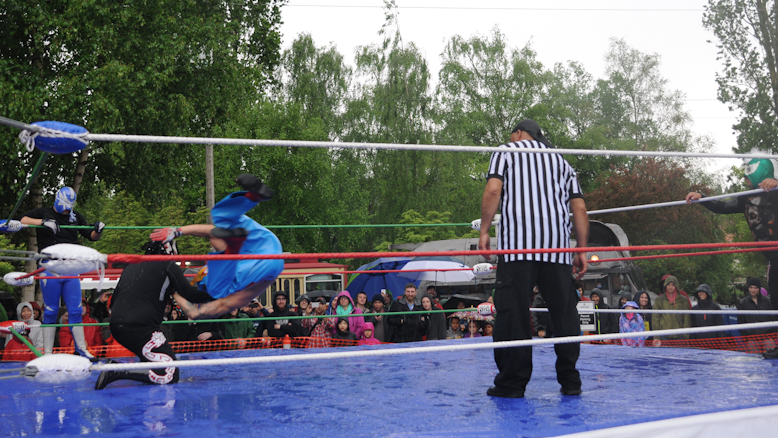 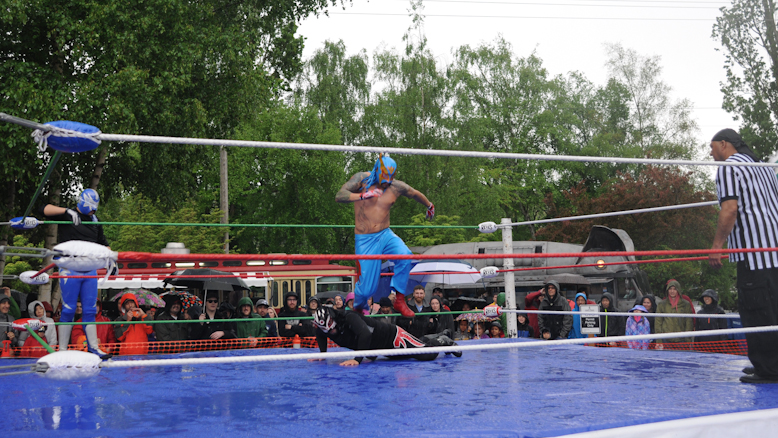 We—rather unexpectedly—came across a Mexican Wrestling ring while seeking out our next food truck target. The crowds were big, and the slippery, slippery ring-surface made for some fantastically entertaining spills and thrills. When asked “why Mexican wrestling?” Ryan Reiter had this to say: “‘Why not?’ is always my belief when it comes to Mexican wrestling.” It’s hard to argue with that! The costumes and spectacle certainly helped bring out the “festive” mood in everyone and, despite the torrential downpour, festival attendees were in good spirits.

I’ve always been a firm believer in the power, the midnight allure, the sheer simple brilliance of the street hotdog. So, when we came across the Tokyodog truck later in the afternoon, I couldn’t resist. We split the Tokyo Dog ($8.00, but half off later in the day), a smoked cheese bratwurst with butter Teriyaki grilled onions, bacon bits, furikake, tonkatsu sauce, and Japanese mayo. The grilled onions were generously proportioned, and kept things nice and saucy throughout the hotdog experience. The hotdog itself was very good; tender with that perfect bit of hot dog shimmer, and not exhibiting any of that offensive fake garlic aroma prevalent in so many bratwursts offered on street corners. I’m sure some of the subtler flavors got a little lost in the fray—Furikake (a popular Japanese rice condiment) in particular—but that’s part of the appeal of a hot dog piled high with a variety of delicious nonsense.

By this time we were about ready to call it a day. Stuffed and soaked, we decided to hit up the very popular My Sweet Lil Cakes truck. Offering “sweet & savory hotcakes on a stick,” My Sweet Lil Cakes was a truck that, we noticed, was consistently lined up. One thing is for sure, this truck nailed it in terms of atmosphere. The staff was upbeat and friendly, and the presentation was well-considered, homey, and generally just fun. We opted for the Red Velvet Buttermilk Sweetcake with organic dark cherries and sweet cream cheese. The cake—yes, on a stick—was piping hot, crispy, and perfectly doughy. The dark cherries were a great touch without being overbearing, and the powdered sugar and sweet cream cheese was, well, icing on the cake. I don’t have the biggest sweet tooth in the world, but my girlfriend loved it, and it’s hard, given presentation and atmosphere, not to consider the “Sweet Lil Cakes” truck as being a highlight of the festival.

Just three years in, the Mobile Food Rodeo is a pretty new thing. Given the exponential growth over the past three years (25 to 60 trucks in just three years is a huge jump), there’s certainly evidence of “growing pains.” Neither of us felt like the VIF passes were a particularly great deal and, while vendors were required to offer a $5.00 sampler plate, we noticed that many food trucks lacked this option. But these hiccups are to be expected in such a new festival that is growing rapidly and, as Ryan notes, the festival organizers have listened to what attendees have to say. Part of the fun of food trucks is the notion of wandering about, coming across something tasty to eat, and stuffing your face while standing idly in the street. And looking around the rainy Fremont streets of the 2014 Mobile Food Rodeo festival this past weekend, that’s what people were doing. While there’s progress to be made, I’ve no doubt this festival will only get better with age. May 2015 might be, well, a year away, but if you plan on being in the Fremont neighborhood a year from now, I’d recommend checking this fun-loving and goofy festival out. Just make sure to bring raingear.

La Reina Pepiada is a Venezuelan specialty, named for Miss World 1955, Susana Duijm, who was the first to deliver the crown to Venezuela (though ...
Read More