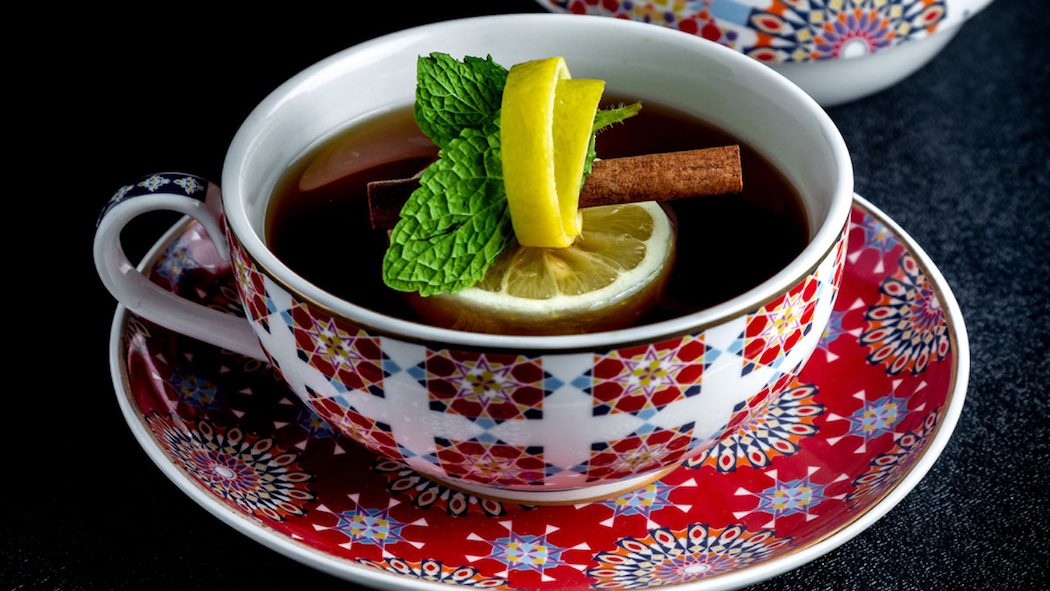 Press Release — Legendary mixologist Lauren Mote and Four Seasons Resort and Residences Whistler have joined forces again to elevate the Spirit of the Mountains cocktail program with the launch of six additional cocktails aimed at igniting the senses.

The Spirit of the Mountains program takes guests on a new journey, mixing gastronomy with geography, the collection of cocktails creates a multi-sensory experience with captivating visuals, aromatic fragrances, complex flavours and variety of textures that bring the world’s mountains to life.

“The Spirit of the Mountains program gives our guests the opportunity to experience something extraordinary and whimsical,” says Chelan Goonetilleke, Director of Marketing at Four Seasons Resort and Residences Whistler.

Launched in February 2018, the Spirit of the Mountains program pays tribute to the peaks across the globe that ignite adventure, fuel passion and shape perspective. This year’s additions bring guests on a journey to new regions of the world including a balsam fir and apple influenced highball (finished tableside), a Tanzanian coffee and clove cocktail with torched banana, and a passionfruit and vanilla-dusted sour.

“I’m thrilled – as always – to continue this story-telling journey of flavour and discovery with Four Seasons Resort and Residences Whistler and SIDECUT. Our first program set the tone, and our newest additions will really give a global perspective to the Spirit of the Mountains. I’m very excited to share these cocktails with their guests – each mountain’s majestic beauty and cultural significance, together represent the heart and soul of this program,” says Lauren Mote.

Identified by thousands of small islands and home to the iconic Whistler and Blackcomb mountains, the Western and Central Cordillera are covered in seamounts and fjords.

Lady of the Mountain – Inspired by the deities of fire, ice and an untamed mountainous wilderness, the Lady of the Mountain celebrates Nordic culture in the Prairies. Each year, the Icelandic-Canadian residents in Manitoba crown a new “Lady of the Mountain,” a spiritual position held by an exemplary woman in her community. She’s poetic and transformative, the embodiment of this blended culture. In this story, the flavours of the North are represented by cold weather fruits and spirits in this “meadow & bog” tea service.

This region is identified with a long western-coastal mountain range – the Andes – creating a continuous highland spanning the length of Chile, Peru, Venezuela, Bolivia and Argentina. Atop these mountains, iconic landscapes like Laguna Verde exist untouched, while cityscapes like the Aztec Macchu Picchu have been abandoned. 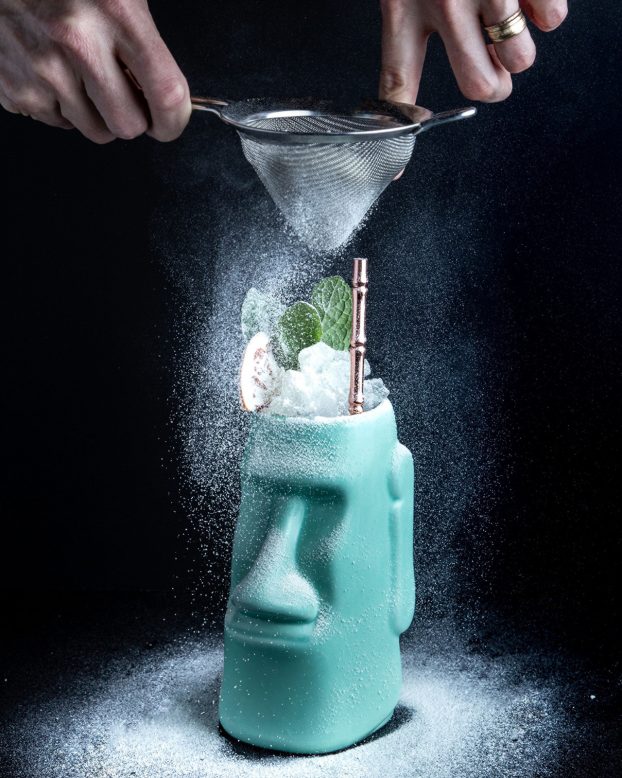 Orinoco Cobbler, on the northeastern side of the Andes, heading past the Brazilian border, the Orinoco River flows. Through Venezuela and partially into Colombia, the Orinoco delta spills into the Caribbean Sea. This river travels 250 kilometres (155 miles) through high-mountainous terrain, picking up minerals and flavours along the way, contributing to the dynamic flora and fauna of the region. The Orinoco cocktail is cobbler-style that blooms with flavour over crushed ice.

Big Rapa Borgona – Rapa Nui, also known as Easter Island, lies due west of Chile, South America.  A civilisation that is the eastern point of the Polynesian Triangle (west to New Zealand, and north to Hawaii), Rapa Nui is home to an iconic landscape with more than 900 hand carved statues called moai, chiselled from layers of rock and compressed volcanic ash. These monolithic statues were moved by hand around the island and are described by the locals as “living faces” or “deified ancestors.” It’s not surprising the moai are one of the Seven Wonders of the World. Rapa Nui, now a Chilean territory, was formed from three volcanos. A product of an underwater mountain range and seamounts that stretch thousands of metres below, only peaks and quarries can be seen above sea level. It only seemed fitting to create a drink inspired by the famous Chilean fruit & wine drink borgoña and celebrate her tropical origins in the mid-Pacific.

A remarkable series of cliffs, mountains, jagged-peaks and adventurous journeys, the North-Eastern region is home to Scandinavian fjords, the Alps, Himalayas and Pyrenees Mountains. A result of tectonic movement and continental drift, the region is home to some of the tallest mountains, and the most majestic scenery.

Iberian Aperitif – Down on the southern edge of the Iberian Peninsula stretches the Baetic System of mountains. Most might not be terribly familiar with the range, but it’s the home of the largest mountain in the region – Sierra Nevada – and also part of the same orogenic system that formed the Pyrenees to the north, the Alps to the east, Taurus Mountains of Turkey, and the Himalayas to the far east. This area that hugs along the Mediterranean Sea, was part of the Alpine Orogeny episode some 250-66 million years ago – roughly around the time when terrestrial dinosaurs were swept from the Earth. By today’s fact-finding mission for drink ingredients, the area is rich with agriculture, vegetation and terroir, making the aromatized wine, brandy, spices, olives and bitter oranges available, creating a delicious aperitif celebrating the Iberian Peninsula’s treasures. 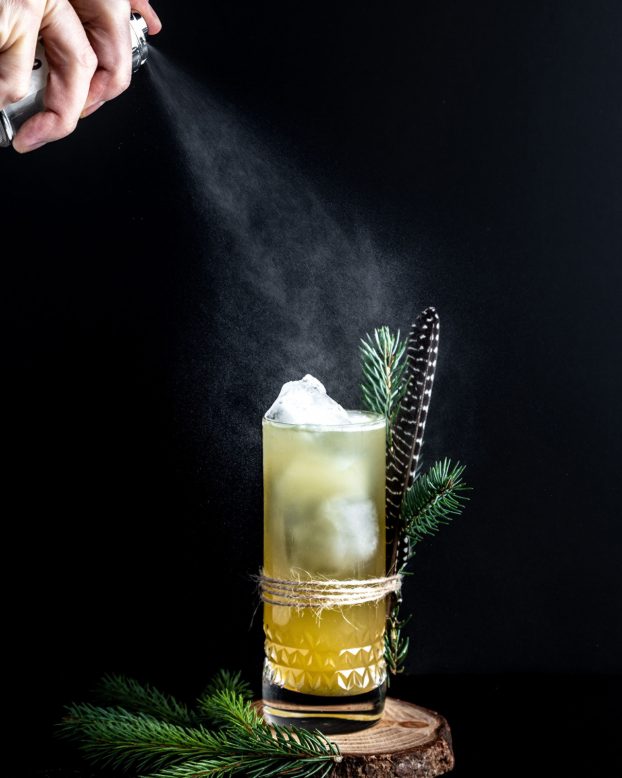 Fujisan Highball – Inspired by the sleeping giant Mount Fuji, and today’s popularity surrounding the whisky highball. These flavours are combined together to give a breath of the Japanese flora landscape; it’s simple, delicious and quenching. Owl feathers symbolise good luck and protection from suffering.

An area imbedded with hundreds of active and dormant volcanoes, the Ring of Fire stretches across a 40,000 kilometre (150,000 mile) horseshoe, filled with oceanic trenches and lively tectonic plate activity. The region has been hurt by some of the most viscous earthquakes, tsunamis and volcanic eruptions ever recorded.

Golden Bridge Sour – The Annamese Mountains stretch north to south, running parallel to Vietnam’s coastline. Most peaks are covered in jungle vegetation and terrain with rock dating back to the Triassic period of 250-50 million years ago. Inland from the coastal city of Da Nang, the Bà Nà Hills attract thousands of tourists each year to travel by cable car from one mountain to another. Within the pavilion, the Golden Bridge is held by a large pair of stone hands, as if pulling the bridge from the earth. The structure is described as a supernatural, gift from nature.

“Peak” Me Up – In eastern Africa, the Great Rift Valley holds Africa’s tallest peak, Mount Kilimanjaro. Looming in the distance, covered in ice and glaciers, this mountain has a secret. Unlike any other, she is a unique volcano, a combination of three volcanic summits stacked as one making her one of the most invigorating climbs for hikers. The rich, orange Tanzanian soil surrounding the area provides remarkable coffee, bananas and spices.

Shawn Soole’s latest book swings open the doors to the world of Canadian cocktails CHIPPENHAM, UK, 20 September 2019—Hidden in the vast northern ...
Read More
It’s all about cocktails, the home bar, what to buy, and what to serve. Founders Kyle and Nate launched their bar consultancy, The Nimble Bar ...
Read More
It’s almost summertime. And in case you didn’t know, that means gin cocktails on the patio. Vancouver Island has a plethora (yes, I just said ...
Read More
Little Jumbo played host to Nimble Bar Co.’s The Complete Bartender Competition, January 16, 2019 Last Wednesday, I judged my first cocktail ...
Read More
Different cocktails have different philosophical traditions attached to them. At least this is how I see it. I still reject the notion that, just ...
Read More
British Columbia’s licensed restaurants, bars, manufacturer lounges and caterers will be able to age and infuse liquor in order to create their own ...
Read More

The article on L’Apéro in the May|June issue should have stated Chef Andrea Maiolo staged at The Courtney Room and Zambri’s and that he held the ...
Read More
May|June issue on the stands. Read ...
Read More
When you think of Greek wines, what comes to mind? After the piney Retsina, probably not too much. But there is an Aegean Sea’s worth of wine from ...
Read More