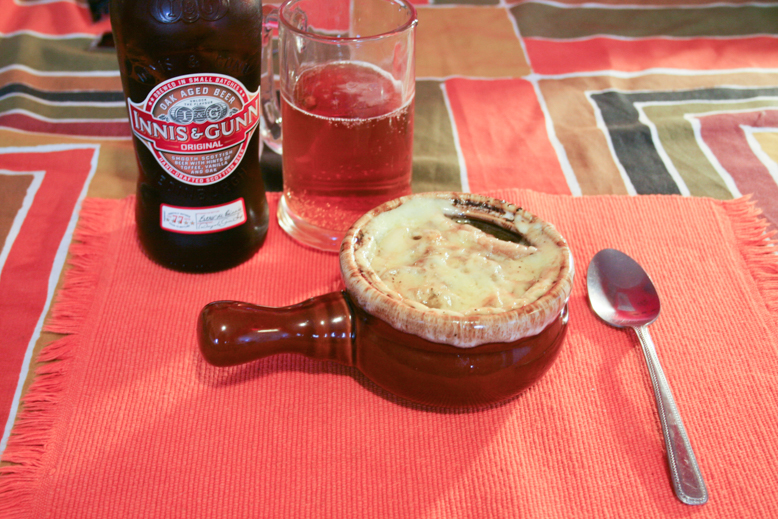 French Onion Soup has long been a classic in France for people who are looking for an inexpensive way to drive the winter cold out of their bones. As opposed to the high-end fancy cooking that some often associate with France, the onion soup is a simple and unpretentious meal. There are many ways to make this soup, and none is especially more correct than the other. The distinguishing characteristics, however, are the caramelized onions, the crouton (essentially a piece of toast), and the melted cheese that sits over the broth. Here in North America, we largely owe our knowledge of (and gratitude for) this soup to Julia Child. I am presenting (as usual) a somewhat involved recipe, but perhaps not as involved as Child’s. 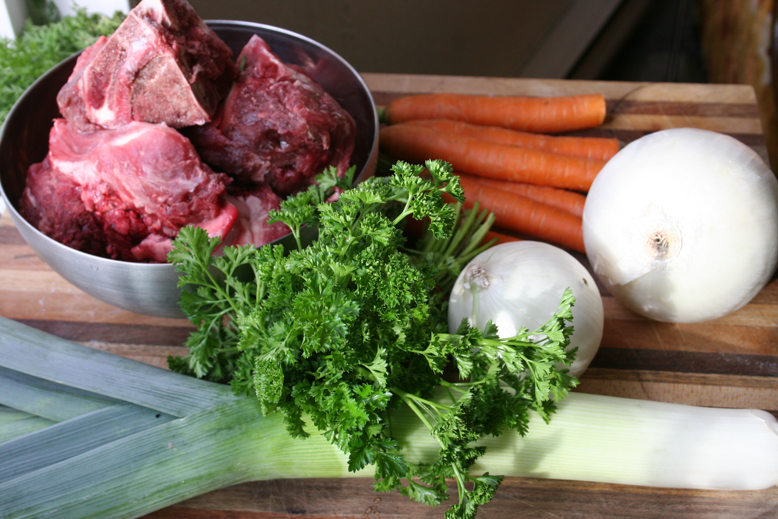 There is no one-way to make the broth. If you wish to be complicated about it you can cook the onions first in the bottom of the pot and at the same time bake the bones in the oven to enhance their flavour. I often save cuttings such as the tops of carrots, asparagus, broccoli stems, and other greenery in the freezer to add to broths as need be. Conversely, if you don’t want to make broth, you can always buy a tetra pack or can of broth at the store and use that instead.  Either way, you will produce a good soup.

In my case, because onions soups traditionally use a beef broth, I went and bought bones from the Quadra Village Butcher. Because butchers deal with bones all the time, they usually have a supply of them handy and cost next to nothing. I didn’t feel like being fancy about my broth, so I simply peeled the onion, chopped up 4 carrots and two celery sticks, and then threw them, along with parsley, the bones, and the top of a leek in the pot. To be clear, I chopped off the green top of the leek for the broth and saved the white bottom part for the actual soup.

I poured in water until my stockpot was full and then brought the contents to a boil. To clarify, the exact amount of water is not that important.  I just fill up my pot as full as is sensibly possible and then make sure it doesn’t boil over. If you are using store bought stock you can mix water and stock (and even wine) until your pot is full.  After this, I simmered the broth for a couple of hours, until the bits of meat on the bones were falling off. I do not add salt or spices, because I mean to freeze the larger part of the broth, and the particular flavours and spices can always be added later.

When the stock is ready, separate the liquid from all the ingredients and set the liquid aside. You can throw the rest in the compost bin.

1 bottom half of a leek – chopped thin

cheese – see notes on cheese below in part 3.

I spoke a little about how to caramelize onions in my article on potato leek soup.  Let me add to that here.  The treatment of the onions in this soup is the main and most important point. If you are going to treat any step with the proper amount of time and respect, this is the one.

The cooking of the onions must happen in two steps. First, take the butter and the oil (I used olive oil to get lots of browning and flavour) and melt them in the pan at low medium heat. Put the onions in and let them cook slowly until they are soft and translucent. Keep your eye on them to be sure they do not burn. This may take 15-20 minutes.

Second, add the sugar and salt to the onions and turn the heat up to medium-high. This will cause the already soft onions to turn brown. You will notice that a brown film is building on the bottom of the pan as you cook and the onions stick. This is good. Stir often, but do not let the onions burn. Again, this step will take time. I have included a photo of the brown effect appearing in the pan.

When the onions are a full rich brown colour, pour in your wine and listen to the pan hiss. Take your wooden spoon and use it to work all the brown off the base of the pan and back into the liquid. In my case, I used a homemade bottle of pink wine given to me by a friend. It turned out to be not so horrible, despite the unusual and slightly tasteless name of the batch…  Take a pinch of herbs and squeeze it in your fingers before throwing it into the liquid. This will open the flavour. Transfer the onions and wine to a saucepot, add salt to taste and then add the stock. I added 8 cups of stock to my pot. If you are using store bought stock you can mix the stock and water to taste. Bring to a boil and then simmer.  Meanwhile, attend to the bread…

The bread in onion soup is often just the advantageous use of a baguette that is already stale and crusty. If you feel like skipping the step of leaving bread on your counter for three days to let it harden, you can take a new baguette, slice it in half, and then take quarters of it and toast them in your toaster oven, or regular oven. The crusty bread is pushed down into the bottom of an onion soup bowl (i.e., a bowl with a handle that can safely be placed in the oven for baking) and then the soup is poured over it. Sometimes the crouton is served floating on the top of the soup with the melted cheese on top of it. This particular method is the most ancient, and dates back at least to Roman times. There is no exact right way, however. I like to push the bread down to the bottom.

It is important to use a baguette, because denser bread with a crust will hold its form in the soup during the baking process. Regular sliced bread, or softer buns are not going to have the proper consistency to make the dish work. I have never tried to use a ciabatta bun, but I expect something like that would do the trick, as well. 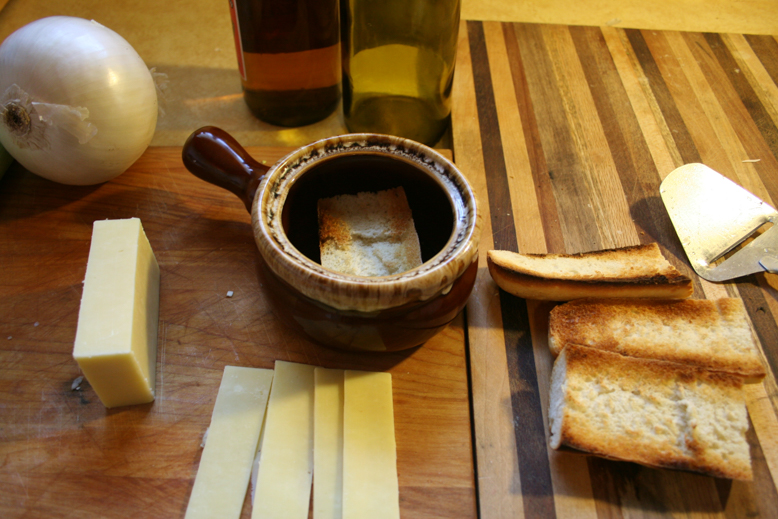 Traditionally, the cheese to melt over top of an onion soup is Gruyere, or some other Alpine cheese. This said, many pubs use either cheddar or mozzarella for the tops of their soups. Mozzarella is the most attractive looking cheese when it is melted, but it is not the most flavourful. I personally used old Irish cheddar for this recipe, but pretty much any cheese that melts nicely can do the job.

Place the toasted bread in the bottom of the bowl. Pour the hot broth over it, and make sure you get lots of onions in there. Shred or slice the cheese and place it on the top of the broth. Take the bowl and place it in an oven preheated to 300F for 20 minutes or so, until the cheese is properly melted. Remove (use oven mitts!) and serve. Remember that the bowl is hot and can burn any surface it sits on.  I served mine with a delicious bottle of Innis & Gunn beer, but what you serve on the side is only limited by your own imagination.

It goes without saying that venues offering beer will draw some sort of crowd. But when a venue offers some very special beer, then it follows they ...
Read More