If you’ve heard the term “farm-to-table”, it’s likely you have an idea what it means. There’s something to do with sunny days, farmers’ markets, and dirt-laden carrot bunches. Grower-partners and producer relationships are lobbed about with clean/green words marketed as meaning ‘fresh’.

left: Barbados Blackbelly Sheep at Covert Farms. right: The Farmer The Chef and The Wine Guy. Photos by Jeannette Montgomery

What does farm-to-table really mean? Our current formula for gathering consists of a trip to the grocery store; if we’re lucky, a market for fresh produce when in season. This puts significant distance between the farmer or producer and our dinner table. Are brightly coloured products on Styrofoam beds, tucked in by plastic wrap, really the best way to purchase our meat?

Recently, I had an opportunity to participate in a visceral farm-to-table experience – on the farm, complete with fields, mooing cows, and a farmer named Gene. Oliver’s Covert Farms invited me to a lamb cull, and I was here to document it for EAT.

It was a research and development project. Farm owners Gene and Shelly Covert purchased a flock of Barbados blackbelly sheep for farm permaculture, and the original six became 16 within a year. Two young rams were causing havoc to the group, and Gene needed to do something about it.

Taking a small amount of livestock to a local abattoir is more challenging than one might think. Between 2004 and 2007, changes to British Columbia government regulations put a strain on family-owned businesses. Mobile abattoirs that provided scaled services to small farmers are nearly non-existent today. So, Gene took matters into his own hands.

With documentaries like Food Inc. uncovering images of barbaric conditions in some of the larger meat processing plants, it’s no wonder we might be squeamish at the prospect of witnessing a lamb cull. I was. And I received a few strange looks from friends when I mentioned it.

You might ask yourself whether this article is something you want to digest; I questioned that myself. But it’s important to know there’s more to meat than those refrigerated aisles – we have nice people living among us who live off the land and teach their children to do the same. These people feed us.

When done with great kindness and respect, the farm-to-table experience raises questions about our current formula – and leaves one wishing for the option of farm gate sales in lieu of fluorescent-lit aisles and those brightly coloured packages.

Meet the players: a farmer, a chef, and a wine guy.

The Farmer: Gene Covert
All 600-acres of Covert Farms have been in the Covert family since 1959, originally started by Gene’s grandparents George and Winifred. Tomatoes, onions, sweet corn, muskmelons and table grapes are their biggest products. The operating farm is fully organic, has an extensive u-pick program, and follows biodynamic principles. Gene and Shelly live on a ridge above the farm with their two sons.

The Chef: Jeff Van Geest
Born and raised in St. Catherines, Ontario, Jeff moved to Vancouver in 1992 where he trained as a chef at Vancouver Community College. By 2003, Jeff opened Aurora Bistro and was known for local, sustainable cuisine. He moved to the Okanagan in 2010 to assume the role of Executive Chef at Miradoro Restaurant  at Oliver’s Tinhorn Creek Vineyards. Jeff and his wife Melanie live in Okanagan Falls with their two children.

The Wine Guy: Derek Uhlemann
Originally from Victoria, Derek has more than twenty years experience in the hospitality industry. He moved to the Okanagan, and after a few years he opened Piggy’s BarBQ in Penticton with his wife Sunnie in 2006. After a side trip to Albania, where Derek worked as a chef and medic in an exploration camp, he now works at Covert Farms and lives in the valley with his wife and their baby daughter. 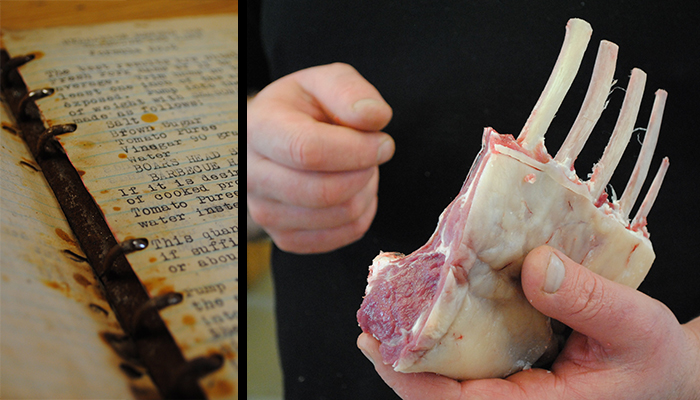 Day One: The Cull

I arrive at Covert Farms wearing sturdy boots and my fella’s old wool shirt, the temperature a moderate 5C with a slight overcast. The night before, Gene and Derek separated two young rams to give them time to rest in a quiet area – and to limit their food intake. Think prep for surgery.

Unsure of what to expect, I wander the farm while Derek and Gene prepare behind the scenes. I head over to last year’s corn maze with Van Doren Chan (sommelier, chef and EAT contributor, also participating in the experiment) and take a few photos of some very curious Highland cows, the youngest having been born this past August. One heifer is pregnant – she’s checked on several times a day, as she’s due almost any minute.

The two rams calmly bide their time in a repurposed starling trap while the players plan their course of action. Gene Covert is an experienced hunter and has field dressed wild game. Jeff Van Geest has participated in a slaughter before, through to butchering. Derek Uhlemann spent a few years working in camps where what was penned up earlier that day was likely on the menu that night. Van Doren Chan’s background includes working on a farm on Vancouver Island.

The decision: in utter silence and with great reverence, Gene uses a .22 rifle. One clean shot to each and the deed is done in less than two minutes. A quick slit of the throat to drain, and then to the tree for the next stage.

Jeff and Derek set to work on one while Gene and his two boys handle the other, Van Doren floating between them. It’s a remarkably clean process, made less intimidating by the people. As many parts are salvaged as possible, paying heed to generations who have done this before. Gene teaches his sons respect for their role in the day’s experience – as homeschooled kids, this is far from the standard lessons in mainstream schools.

The animals have been skinned, gutted, cleaned, and hung in an industrial refrigerator where the meat will spend the next week ‘relaxing’. The boys are called back to continue lessons with Shelly, while Gene takes us on a tour of the farm.

I thank Gene for the experience, and he expresses genuine happiness at seeing people interested in what they’re doing. Van Doren and I each get a hug goodbye. It feels like I’m being adopted into a family.

Jeff, Van Doren and I meet Derek at Covert Farms one week after the cull. Derek has brought his great-grandfather’s recipe book; its typewritten pages are yellowed, spotted with age and rust. Great-grandpa was a butcher, so we also have his knife.

The meat is butchered into large portions: ribs, leg roasts, neck. The finesse will come later; for now, the main challenge is metal versus bone – and great-grandpa’s vintage metal wins a quick victory. Chef Jeff takes a liking to the blade, and I caution Derek to check Jeff’s knife roll on the way out. 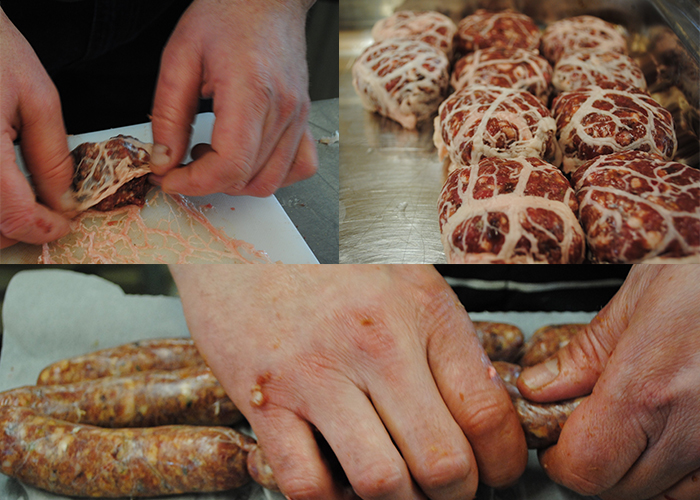 Prime cuts are cleaned and smaller portions left for charcuterie (read: sausage). Jeff has something special up his recipe-sleeve. A tacit knowledge takes over Chef Jeff’s hands as he cleans a lamb rack, everything moving so quickly that when I try to take a photograph I can’t get more than one thing in focus at a time.

Van Doren slips into the role of sous, automatically addressing Jeff as “chef” once individual cuts of meat are discernable. The shift is subtle.

Chef takes over the grinder and feeds the machine with chunks of seasoned lamb. One grind, then two, creating the consistency he’s looking for. The farm has become the kitchen during the last few hours. A quick test-cook of the final grind confirms the meat is delicious. Chef Jeff uses this to make crepinettes – a small, flattened sausage wrapped in caul (a fat-lining, usually from a pig). Then duty calls and Chef is off to cook for a special event for approximately 40 people.

Once Chef Jeff departs, Derek and Van Doren take on the grinder-turned-sausage-maker. After a few false starts – attaching and re-attaching nozzles – they find the right combination to fill the sausage casing and go to town. Soon, two metal cooking sheets are filled with sausage and Derek is twisting the length into small links.

By the end of the day we have two bins of prime cuts, two trays of crepinettes, and a large pile of sausage links. The “delicates” (read: organs) are frozen and kept for some future use, possibly after researching further into great-grandpa’s recipe book.

In an ideal world, a place like Covert Farms could to sell this meat to a chef like Jeff and local, farm-fresh lamb would be on the menu. Add a set of guidelines, throw in an inspection schedule, and small farms could feed their communities. Instead, we have regulations for industrial-sized processing plants – a framework maybe too big for the small operations trying to do what has been done naturally for generations.

These events occurred on private property for personal consumption. As someone on site during the process, I could eat what was lovingly raised and mindfully slaughtered. I wish you could, too. Meanwhile, I’m off to find a local butcher and ask some questions.

Superflux Cabana has opened upstairs at 804 Broughton St (the former location of The Livet). Featuring lots of Superflux beer and a menu that ...
Read More
January|February issue is on the stands! Pick up a copy, or read the digital version. Read ...
Read More
As we near the end of 2014, it makes sense to reflect on the past year. I’ve noticed two significant trends emerge. First — and I’d like to ...
Read More