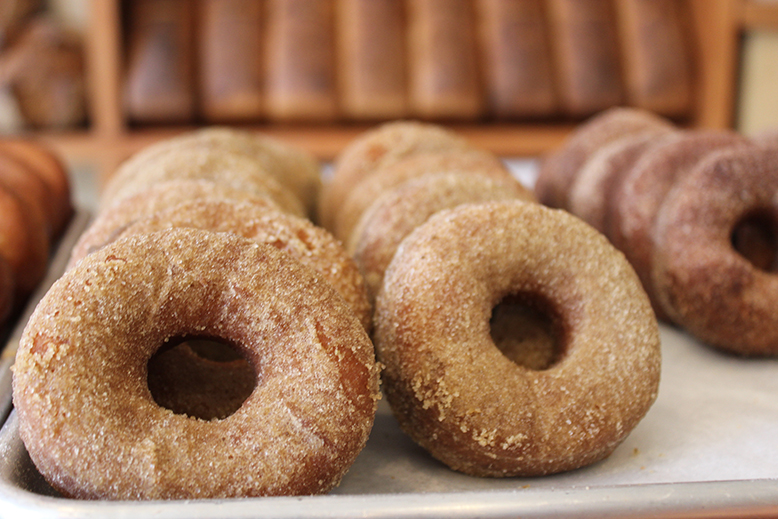 Walking into a trend-savvy doughnut shop or café, whether it is in Portland, Vancouver or Victoria, you are likely to find doughnuts the size of softballs piled high with zany toppings and dripping with layers of sugary glaze. Colourful cereals, cookies, candies and sticky sweet confections vie for the most insulin-spiked topping. Whipped, jellied and creamed fillings with concentrated flavours ooze from the sides of pastries, barely contained in their cradle of dough. Outrageous and borderline-ridiculous flavour combinations compete to stay on top of the rising trend. As the cupcake once was, the doughnut is now the king of the hipster bakery scene.

Fry’s Bakery has taken a different approach to the crafting of their doughnuts. Owner and baker Byron Fry and pastry wizard David Johnstone are not trying to meet the demands of ever-changing pastry trends. Instead, they found themselves with a small surplus of some lovely brioche dough and thought “we should deep-fry this.” This sums up the philosophy behind the doughnuts at Fry’s. The desire of any baker to experiment with their dough has led Fry’s to offer a limited, but highly coveted, once-a-week doughnut menu that keeps neighbourhood locals and the pastry-dedicated in a state of anticipation.

Deciding to serve up doughnuts at Fry’s was not born out of a need to “stay on trend” but rather to produce a weekly treat for their neighbourhood regulars. Produced in small batches, these doughnuts are refined and simple with an emphasis on the quality of the dough and the balance of flavours. Complementing the bakery’s mainstay of handmade rustic breads, Fry’s small pastry division focuses on buttery Danishes, hearty sausage rolls and flaky croissants. The idea is to create small batches of desirable items that, with a tweak in flavour or the use of an interesting ingredient, excite and surprise the loyal customer base. 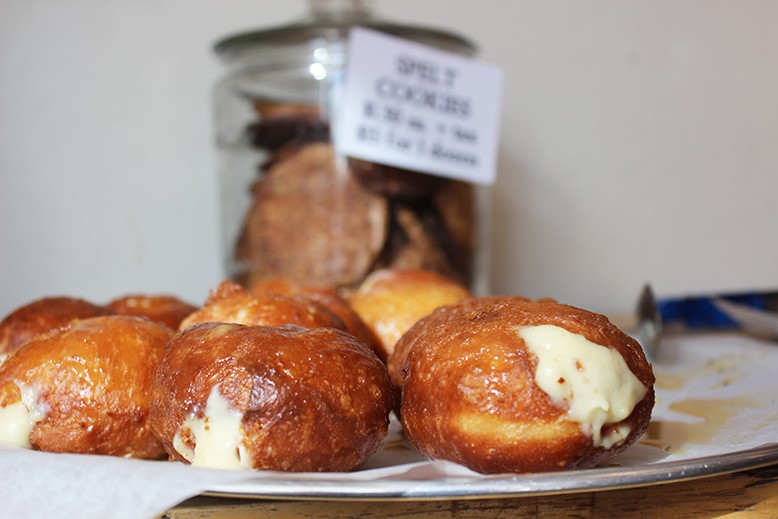 Fry’s doughnuts, sold only on Sundays, are made over a three-day period. The focus is on the fermentation of the dough, helped by a sourdough starter, a longer and slower method that pays dividends in flavour and quality. The process also pays attention to local or well-crafted ingredients such as eggs from Fry’s family farm in Metchosin and a rich, 83-percent butterfat from Foothill’s Creamery (most butters are 80 percent butterfat). Fry notes that “the reason we eat doughnuts is for the dough” and, as such, the quality of their doughnuts is a fine addition to the bakery’s regular roster of outstanding breads and pastries.

The flavouring of the doughnuts is created by pastry chef David Johnstone, who opts for a more developed approach to infusing flavours. For example, he recently found himself with an excess of bacon trimmings, which he brewed in to what he calls “bacon tea.” This was then subtly infused into the delicate pastry cream used to fill the doughnuts. On the other end of the spectrum, the (thankfully fading) trend of bacon-flavoured, well, everything has resulted in doughnuts crammed full of bacon bits, topped with bacon chunks and glazed with sweetened bacon grease. Johnstone has avoided this pitfall by recognizing that his customers don’t come in to eat bacon; they come in for a superior doughnut that hints at bacon. 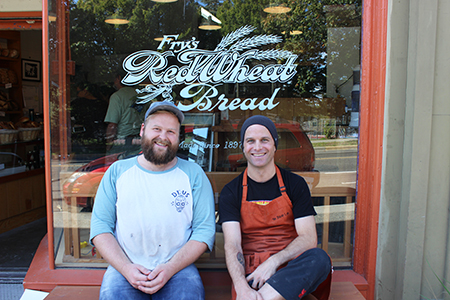 Classics are also on the menu, which regularly offers a simple honey glaze doughnut or a comforting cinnamon sugar. Johnstone, however, does not shy away from curious flavours. Recent recipes have featured adzuki bean jam, macha pastry cream and bergamot powder. The flavours respond to the adventurous tastes of the clientele, who pop by regularly to see what new ingredient the bakery has been included in the daily pastry menu. Both Fry and Johnstone expressed a commitment to bending with the seasons, the use of small harvests from local farmers and a desire to keep their neighbourhood regulars guessing what might come next.

As we discussed the process of Fry’s doughnut-making, it is clear that the bakery does not cater to any specific crowd or social scene but to their loyal clientele, who are committed lovers of quality, local ingredients. The bakery attracts those who seek not to find the craziest new take on a pastry but those who come to appreciate the intricate and demanding process of producing a refined and simple product.

July|August issue on the stands. Read ...
Read More
Do you have a passion for writing and photography? EAT Magazine is expanding our web team and we’re looking for talented Victoria residents who ...
Read More